The year 2020 is one that burned itself into everyone’s mind globally, and for several unsavoury reasons too that are probably playing across your mind as you read this. However, we weren’t left without some highlights. For Nigerians, one of such was the music industry. Despite having to social distance, our artistes stayed with us through the bad and good, comforting and entertaining us with singles, projects and social media challenges we made with our friends. It behooves us to give honour to whom due so we had a roundtable to decide on the hottest artists of 2020 in Nigeria. Well let’s see what artistes made the list shall we? 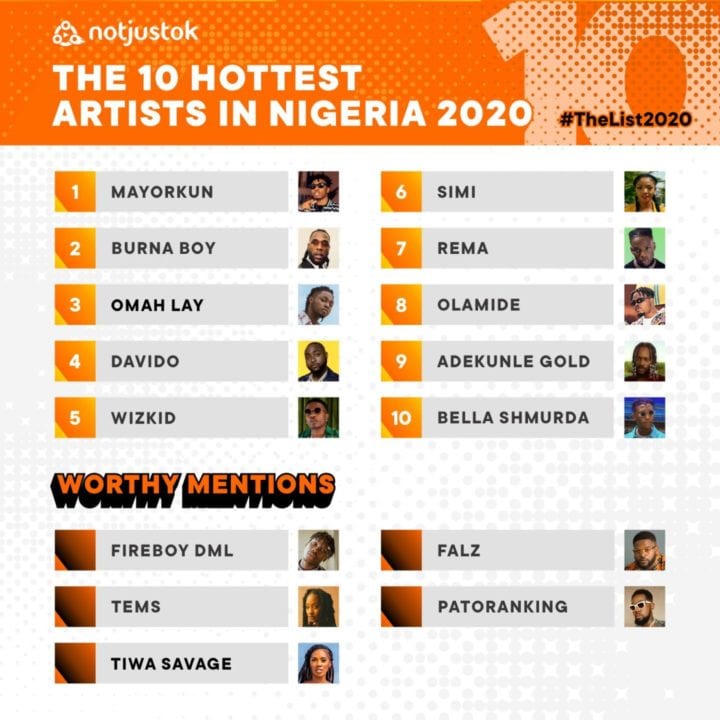 When you hear ‘gege’ what comes to mind? Is it Agege, the Lagos suburb, or Mayorkun, the self-styled Mayor of Lagos?

Your answer is as good as mine. This is because Mayorkun has via his multiple singles and collaborations become the mayor of Lagos and the hottest artiste of 2020. The singles range from ‘Geng’ which was sensational, even on TikTok, to ‘Of Lagos’ that had a special remix for housemates of BB Naija’s Lockdown edition, to 'Betty Butter' that had our makeup artists create phenomenal work among several other hits. 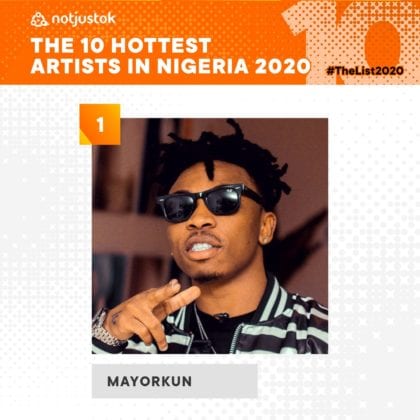 With 'Twice as Tall', Burna Boy left us no choice than to have him make our playlists and some of our favourite songs. But before the advent of his latest album, we had been thrilled by his lines on Master KG’s remix of ‘Jerusalema,’ and those on Kabza De Small’s Amapiano earworm; ‘Sponono.’ 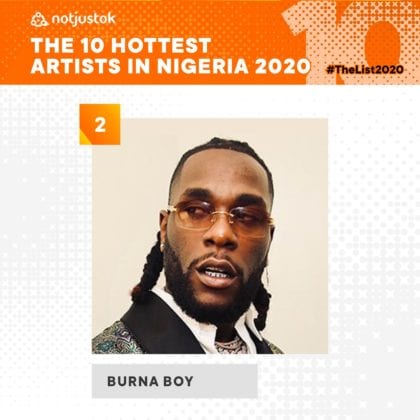 This year, after saying 5,000 ‘OMOs’ at Cross-over night and thanking God for our wins and lives, it won’t be remiss to thank God for the miracle of 2020, Omah Lay.

Like an unexpected love affair, his voice broke out into the scene and breathed new life into our ears as well as this list of hottest artists, right from the first quarter of the dastardly year and hopefully, till infinity and beyond. 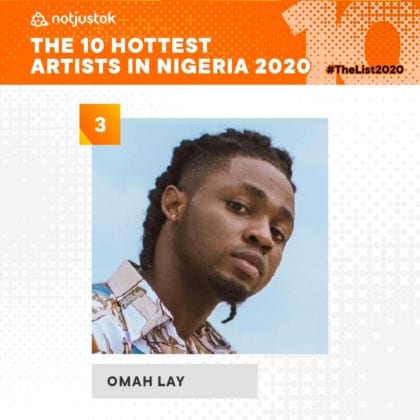 They say absence makes fonder and Davido proved this when he took a three-month social media break in early June, only to hush the groaning of fans with one of the biggest records of the year; ‘Fem’. He then gave us ‘A Better Time’ in a strife-filled year. 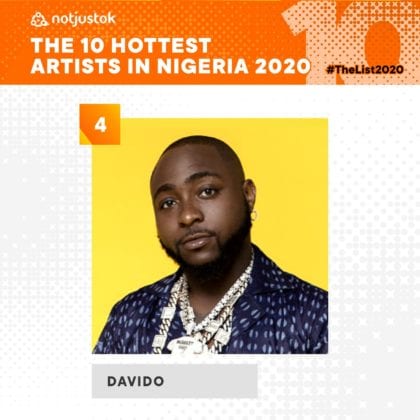 This year, Wizkid thrilled us with evergreen tunes from ‘Blow’ and ‘Jam’ that made our December last year, to his collaboration on DJ Tunez’s ‘Pami.’ And then he resealed his national treasure rank with ‘Made in Lagos.’ 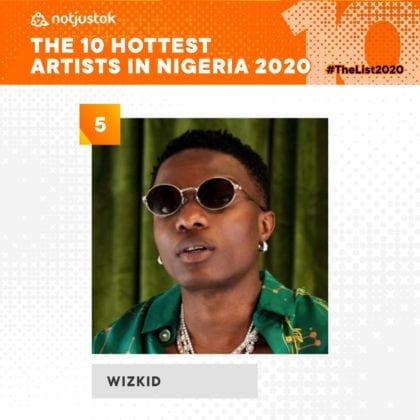 Simi’s ‘Duduke’ was so significant that we saw people of different age groups involved in a social media challenge that had them singing to baby bumps, both real and improvised. But that wasn’t the only time we were collectively serenaded by Simi’s vocals as she served the template for which Ladipoe offered us ‘Know You.’ 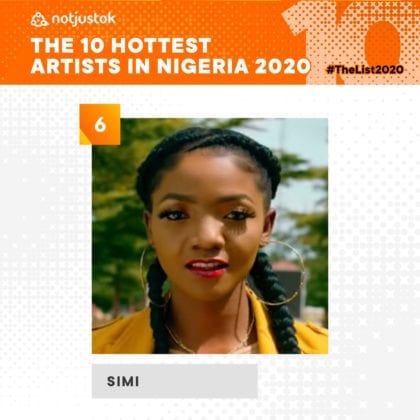 2019 was Rema's year, of breaking into the scene and owning it but his success is definitely no fluke as he's proved himself three times and more, this year alone. With ‘Ginger Me’, ‘Beamer’ and eye-opening Amapiano-infused ‘Woman.’ 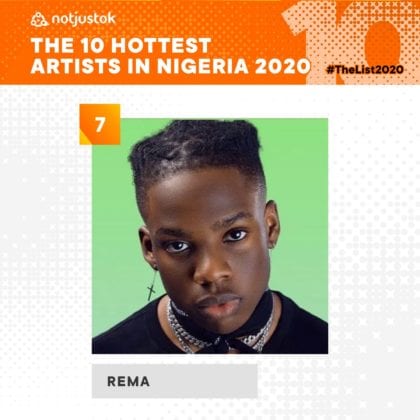 Other than giving us hits this year like every other year since 2010, Olamide also laid another blueprint for the industry. This time, it's titled ‘Collaborating with Young Cats 101’ and his 11th studio album, ‘Carpe Diem’ is the classroom. 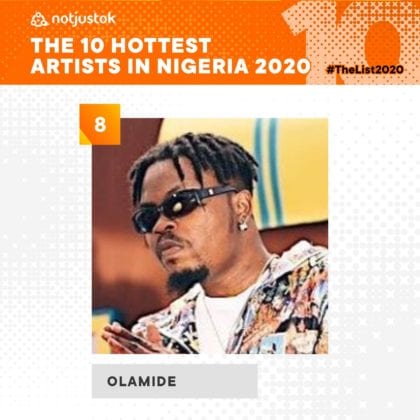 This year alone, AG went from being the baby to being the daddy but it wasn't just by declaring it. He gave us his feature on Kizz Daniel’s ‘Jore,’ then came ‘Pami’ before ‘Something Different’ which preceded his daddy-level ‘Afropop Vol 1’ album. 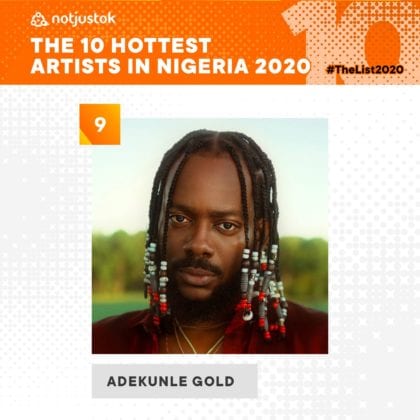 2020 is the year of the boy wonders and Bella Shmurda predicted and sang his way to this list as one of them. With ‘Vision 2020’ he landed himself a feature with Runtown on ‘Body Riddim,’ emerged ‘Triumphant’ with Olamide. There's also ‘Fade’ with Davido. And now he has the whole country reimagining ‘cc’ as ‘Cashapp’. 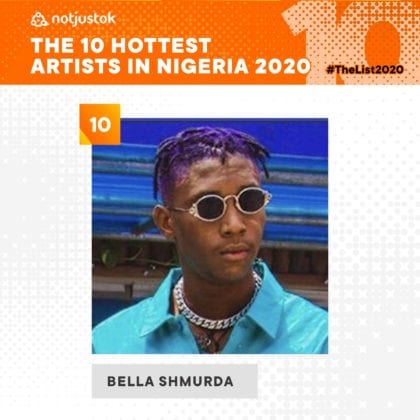 Here are some of the  hottest artists in Nigeria that didn't make the list but entertained us this year and deserve an honourable mention, in no particular order:

What do you think of our Hottest Nigerian Artist 2020 list? Do you agree or otherwise? Let’s know what you think and who your personal hottest artiste for the year is in Nigeria.