2020 was a tough year but it had nothing on the Nigerian music industry as our artists kept delivering hit songs back to back to entertain us. We had breakout acts like we’ve never seen before, and a barrage of quality albums as well, and then there were several hit singles. To succinctly put it; hot songs, o por. Here’s a look at the 20 hottest Nigerian songs of 2020: 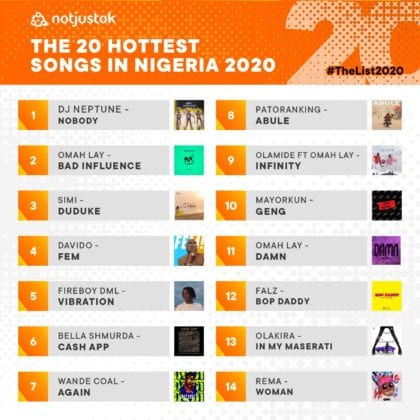 This song had several versions, from the Icons remix with Laycon to the Amapiano version and then the original song. This only served to see the song climb the charts several times. But nobody complained because DJ Neptune, Joeboy and Mr Eazi ensured that the song took no prisoners.

When viral sensation, Crackheadextra took to the streets singing 'Bad Influence' at the top of her lungs, we were taken aback like everyone else that watched her on the streets, but deep down we all knew that Omah Lay’s hit song had us in our feelings like that.

Being Nigerian living in Nigeria keeps getting tougher and tougher and during the heights of the pandemic, it was worse yet. But when Simi put out 'Duduke', it was the ultimate ‘God when song’ and we were able to pause as a nation and think of happier things like the beauty of childbirth even if we were more single than a grain of rice.

Davido knows how to give us hits and after his 3-month long social media break, he gave us 'Fem' to serve that purpose. What no one saw coming was 'Fem' going from one of the hottest songs then becoming the #EndSARS protests anthem used to shut down unwanted talks from the opposing parties.

'Laughter, Tears and Goosebumps’ might have been released late last year but this couldn’t take away from the fact that premium jams lined the album and 'Vibrations' ended up being the unanimous selection everyone made even till 2020.

We all knew ‘cc’ to mean close caption and was nothing more than office lingo used in an email, well until Bella Shmurda, Zlatan and Lincoln decided to incept the minds of everyone with ‘Cashapp’ and now ‘cc’ is the word from that hot song that won’t leave our head.

The description of this song, coincidentally lies in its opening lines; “sweet like water wey dey inside coconut.” 'Again' is a fresh and sweet tune from Wande Coal and it is little wonder it became quite the chart climber.

Wizkid’s affirmation of the power that 'Abule' packs as a jam might have come several months after the song first started to speak to our bodies, ears and playlists but it was the gospel truth and the confirmation we didn’t know we needed to hear.

9. Olamide ft.Omah Lay - Infinity: We’ve had a lot of earworms this year but in the case of the Omah Lay-assisted ‘Infinity,’ we’ve more or less been taken captive and the only accepted ransom is to run up the P.Prime produced record for the umpteenth time.

It was the 9th of April when DMW top striker, Mayorkun released not just a banging tune but set the precedent for a new slang with the refrain ‘set awon.’ 'Geng' didn’t just stop there however but went on to also give us a major social media challenge with the geng freestyle.

Next on the list of Hottest Nigerian Songs of 2020 is:

After his debut EP, Omah Lay has soon dubbed the breakout miracle of 2020 and his record ‘Damn’ holds some of the answers.

Whenever we remember the Coronavirus pandemic and life in lockdown, a corner of our brain will play Falz’s ‘Bop Daddy’ and that might just be the only memory from that period that doesn’t make us hate that time of our lives.

Olakira’s ‘In My Maserati’ spoke in melodious tones of the plush life we all dream about and work tirelessly for, so music lovers definitely had no choice but to give it a listen and then several more after that till it became the number one song in the country.

Nigerians musicians and producers have issued the South-African birthed amapiano genre a green passport and it all started from when Rema confessed to us about something we’re all guilty of on ‘Woman.’ 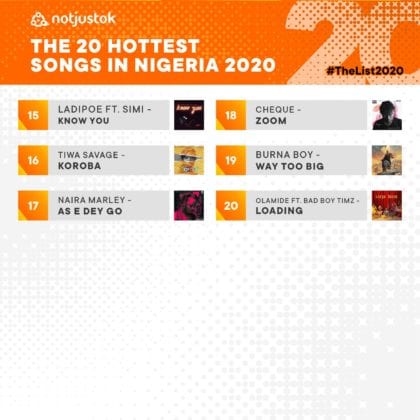 The Hottest Nigerian Songs of 2020 will be incomplete if we fail to mention this track. Ladipoe and Simi’s flow on this song can only be matched by the compatibility of jollof rice and dodo. The second blow was then dealt with by the introspective lyrics that made us all feel seen and ready to get into our 11th talking stage.

Tiwa Savage posed the question ‘who no like enjoyment?’ And the entire federation had promptly raised their koroba to take a stance against the hard life while singing along with the African Bad Gal.

Naira Marley made the 2020 hottest songs in Nigeria list with this jam. On this record, Naira Marley made Marlians out of the lot of us and reaffirmed his presidency as he hit us with another hot song with lyrics we could relate to on a bedrock of catchy melodies.

This makes for another chart-topping breakout hit which came with the promise of zooming away from negativity and into greatness.

When self-proclaimed African Giant released his Twice as Tall album, the entire tracklist literally made the charts. And then there was this irresistibly boast anthem that ‘Way Too Big’ presented.

Bad Boy Timz calling out ‘spiritual ginger’ at the beginning of 'Loading' is all we needed to know about how much of a banger it is.

What were your hottest songs of 202o and how many of these Nigerian songs do we have in common? Leave your comments below. 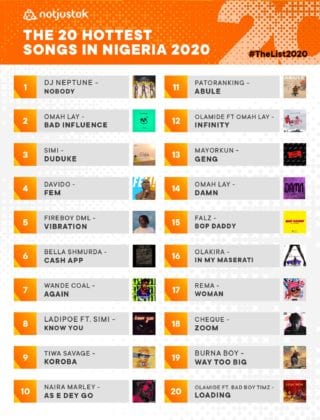