Next Rated or Not? Twitter Users Debate Over Laycon’s Artiste Ranking

From the moment he stepped on the stage of the recently concluded BB Naija show, Laycon became the talk of the show.

Then, it had been his illuminated jacket that drove the conversation. But not much later, he’d won the hearts of many.

The turnaround on the viewers’ end had been swift and can be partly attributed to the discovery of his rapping skills.

These skills were soon outed by Laycon himself as the reason why he’d ventured into reality tv. 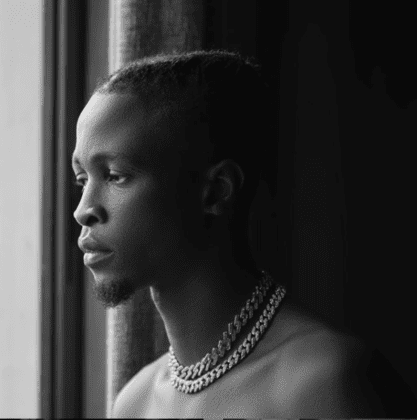 According to him, while speaking to Ebuka after emerging winner of the show; “I only came to Big Brother to promote my album, my EP.”

His plan paid off and right from day two of the reality show, viewers had taken his ‘Who is Laycon’ EP to the third spot on Apple music.

This support he has garnered since stepping into the reality tv world remains steadfast and he has become a trending topic on several occasions.

Today, the 6th of November is no different as Twitter users, fans, and foe alike of Laycon have engaged in a heated debate over his status as an artiste.

This discussion emerged when Naija PR, a PR page on the social media platform, Twitter asked music fans who to choose their next rated artiste. The question was supported with a graphic design that included pictures of 6 new-generation artistes namely Omah Lay, Bella Shmurda, Cheque, Zinoleesky, Badboy Timz, and Laycon's inclusive.

Who is your next Rated Artist??🙂 pic.twitter.com/Ct9od3JGX0

While a good number of Twitter users stand with Laycon, several others have reacted differently to his inclusion in the list. They are of the opinion that his career is still in the budding stages and his fans, known as 'Icons' are being motivated by their emotions. 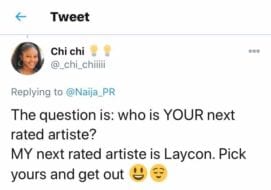 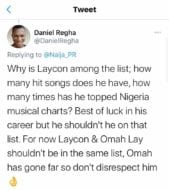 Laycon recently collaborated with DJ Neptune and Joeboy to produce an Icons Remix to ‘Nobody.’ His EP also featured indigenous rap gurus like Reminisce and Chinko Ekun. He has also made mention of an upcoming album.

What do you think, does Laycon deserve to be regarded as one of the next rated artistes of 2020?