As the world progresses into true globalisation with cultures and micro-traditions from different parts of the world being phased out and on the bright side, becoming adapted and popularised. For instance in Nigeria, we’re currently witnessing a more active interest in the Gaelic-influenced, Western Christian-propagated Halloween culture and city residents all over the federation have been in a costume-spirited frenzy, as they indulge in Halloween events with a first-of-its-kind vigour. Originally celebrated in Western nations were Christianity is popular, Halloween derived from “All Hallows Eve” is marked as the day before Saints’ Eve and in the United States of America and other nations with a history of the tradition, is celebrated on the 31st of October yearly. This celebration is distinguished with costume parties where partygoers cosplay or dress up as famous personalities either fictional or actual as well as trick or treating where costumed up kids are rewarded for their decor style with candy.

It is this tradition of playing dress-up and turning up at events that have been done up in Halloween-inspired decor that has now, in year 2021, found a soft-landing in pre-Covid lockdown Nigeria. So

In 2018, Wizkid went past name-dropping Italian luxury fashion house, Dolce and Gabbana in his songs such as Don’t Dull to walking the runway at their 2018 show in Milan beside supermodel, Naomi Campbell. Done with optimum Starboy swagger, Wizkid had walked in a swirly patterned gold-embellished jacket and pants with an embellished full face mask even before they become the world’s most popular fashion accessory no thanks to Covid 19.

ALSO READ: Here's A Rundown of Every Musician Wizkid Has Brought On Stage At the 02 Arena 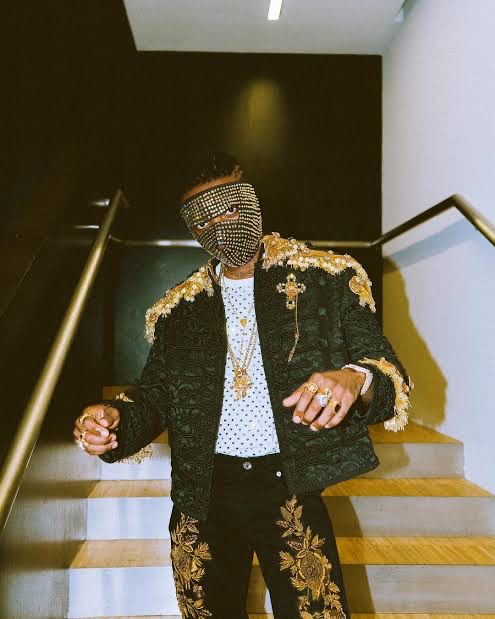 While Dolce and Gabanna is not a fashion brand for the lightly-credited, this outfit could be thoughtfully recreated as an all-black, gold-jewelled co-ord set complete with an embellished ski mask for fans of the star who are looking to experience Halloween as Wizkid.

Another cosplay-worthy Wizkid outfit is his much-talked-about beige coloured co-ord set that makes the cover of his world-renowned Made in Lagos album, styled by fashion editor and consultant, Karen Binns. And for more street-wear-inspired Halloween lovers of the star, his bright orange Moncler hooded jacket moment in Burna Boy featured Ginger may be a better swing at Wizkid cosplay.

On the 15th of March 2021, after Burna Boy had thrilled viewers from every corner of the universe to his rousing performance of some records off his soon awarded Twice as Tall moment, for the 2021 Grammys, the African Giant had changed outifts from his custom made Botter Paris cream suit to a white suit from Dior. Designed with colourful prints on one side of the jacket and paired with a shirt just as entrancingly colourful as the patterns on the jacket and a monochrome logo-splattered mesh glove from Dior on his left hand which was crowned with a huge diamond pinky ring, the freshly awarded star had made a statement in suaveness. And with such outstandingly minimalist elements, has now given fans costume ideas for a Halloween party.

ALSO READ: 'Burna Lo Help Stormzy': Here’s What Contributors to &'Twice As Tall' Will Be Getting from the Grammys 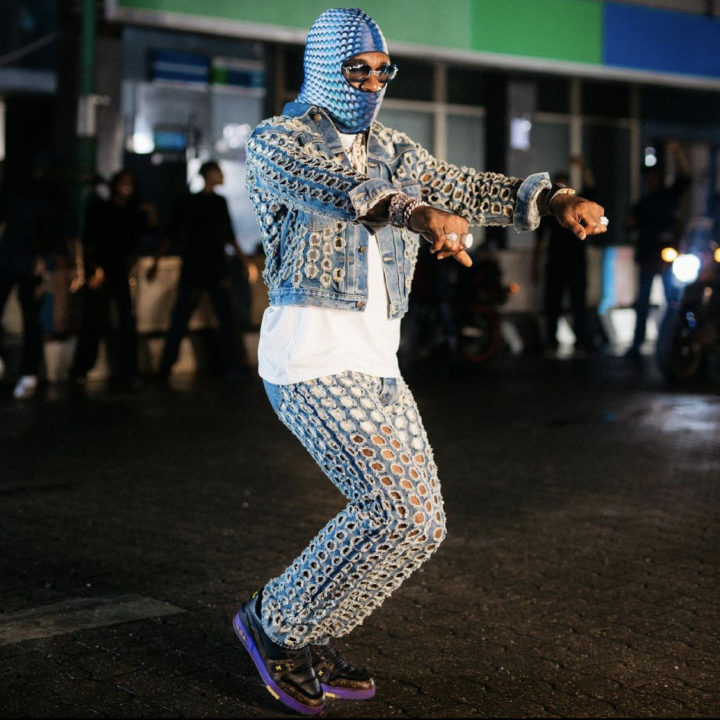 Another Burna Boy outfit to take inspiration from would be his baby blue perforated denim moment in the visuals of Kilometre which he paired with a blue ski mask and Louis Vuitton low tops for a chillingly cool look. A regular at making fashion statements, with the help of his sister, Ronami Ogulu, his double-layered Tokyo James damask suit for his appearance at the 2019 Grammys and his outfits for the Brit awards and BET that same year, bear elements fashionable fans would love to spin into a Halloween costume idea.

One thing about the ever bubbly megastar, he never fails to go big on whatever task he takes up had in similar fashion, shaken up style-keen fans with his full Bottega moment where he donned a padded Bottega vest, layered over a plain white tee with a pair of dark shorts and loafers and quilted tote bag from the luxury brand, styled by Eferoghene Asagba, popularly known as Twizei. 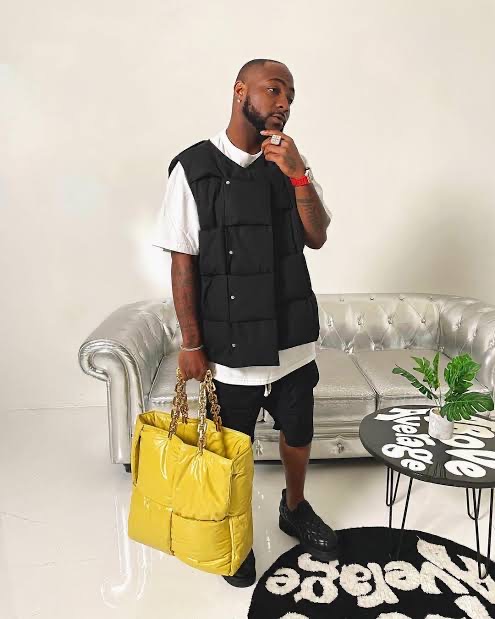 Padded accessories being the rave of the moment, lovers of the 30BG captain may decide to embody the singer by pulling inspiration from his triple Bottega moment or run with his Peaky Blinders-inspired look for his movie-like Jowo music video. There’s also his master of martials arts moment where he reasserted himself as the blueprint in Mayorkun-assisted The Best.

Irrevocably known as the African Bad Gyal, Tiwa Savage always shows her fashion mettle at any and every occasion and the rollout for her Celia album was no different with her fully-Nigerian-styled Koroba music video moment, put together by Daniel Obasi, taking the cake. Rocking Nigerian A-List brands from Banke Kuku to Deola Sagoe and more, nothing screamed Halloween-worthy cosplay more than her all red moment in Tokyo James which included a red wide-brimmed hat, a Victorian-style dress, and a red corset as well. 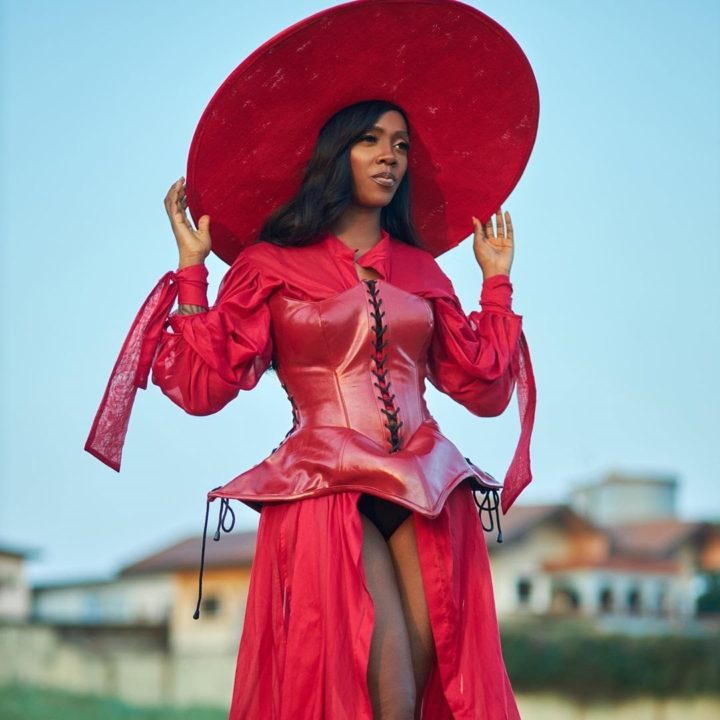 Other iconic Tiwa Savage style moments ringing bells of cosplay include her village schoolgirl look for 49-99 and her conversation-starting, skin-coloured sheer catsuit in her provocative Wanted video.

Halloween in Nigeria costume inspirations: Yemi Alade as the Woman of Steel and more

Never one to let up on her art-powered movement of black excellence, the millennial Mama Africa makes sure to always serve with her African indigenous costumes that are the stuff of cosplay moodboards. And so on the cover art for all her musical projects, Yemi Alade has exquisitely channelled African beauty and her Woman of Steel album art is a quintessential exhibit. 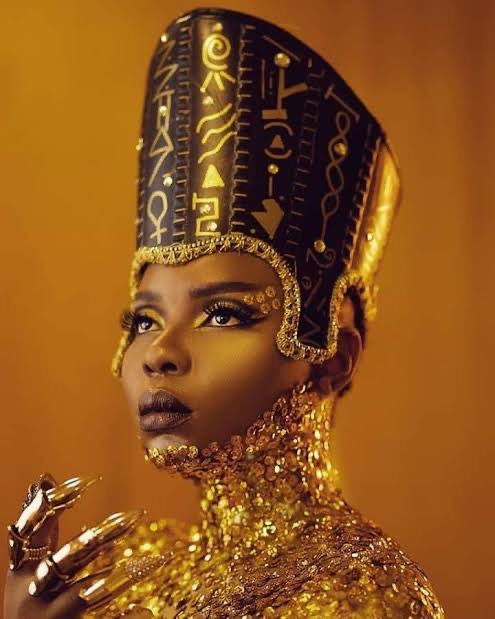 Other Yemi Alade cover art looks to pin up on a Halloween-themed moodboard range from her costume on Mama Afrique to Black Magic and her more recent Empress. There’s also that one time she was a limegreen fur, blond-haired, limegreen leather dress garbed enchantress that is every bit as inspirational as her Mama Africa moments. 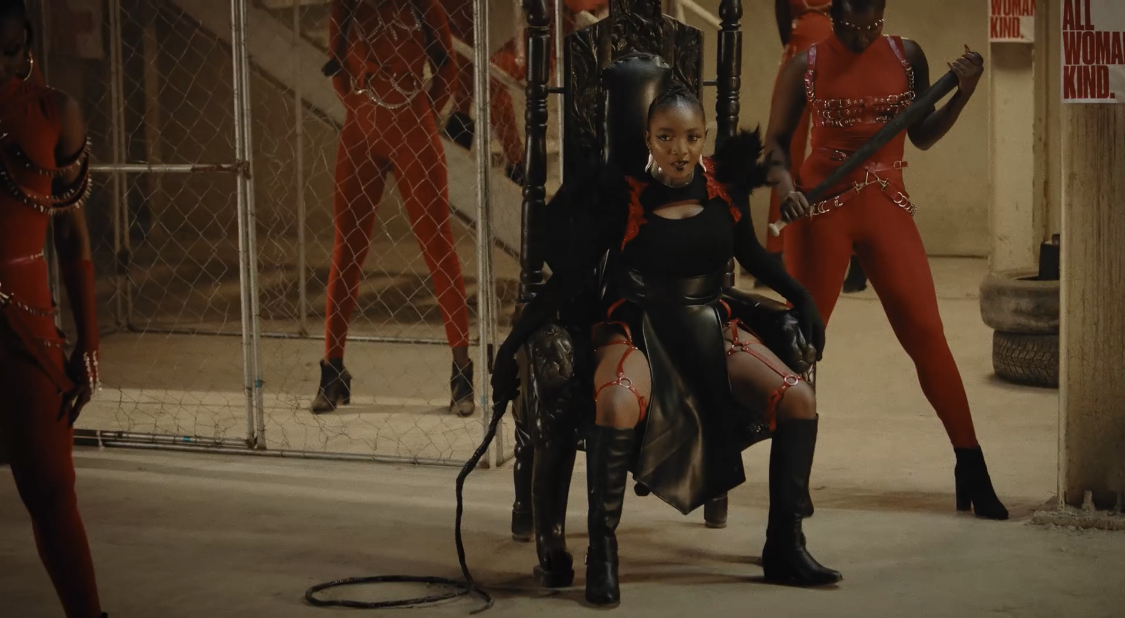 Baby-faced and butter-voiced, yet never hesistant or relenting in speaking up for the rights of women, Simi put this to song on her latest single, Woman and with help from Temitope Udual Betiku of Gang Styling, gave us images for the lookbooks. First, there was her bright green tower of tulle that brought to mind images of a black fairy godmother but her all-black moment in the cut after was even so much the more Halloween cosplay gold. With a fierce ponytail and black lippie, Simi assumed the role of a confidently dominant woman in her black bodycon top with red ruffles and slitted leather skirt, paired off with a black whip.

Establishing himself as the master of seamless and all-round evolution, Adekunle Gold had refined his sound and image on his most recent album, Afropop Vol. 1, stealing the scene with his spotless and iridescent look in a red co-ord and heavily beaded braids that had featured a mirror to reflect his immaculate style.

ALSO READ: Davido and 5 Other Nigerian Musicians and Their Kids that Give us Baby Fever 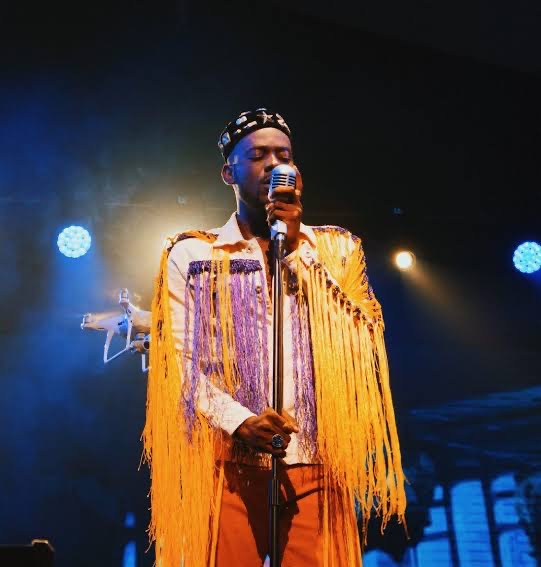 Many fans of AG Daddy as he’s now come to be known, will also not forget in a hurry and may choose to find Halloween costume inspiration from his fourfold serve at his 2017 concert, One Night with Adekunle Gold, with his yellow fringe jacket outfit as well as his gold-embellished suit, making rounds on social media.

Very much the family man, Adekunle Gold empowered with a cameo from his wife in Sinner had also provided outfit ideas for couples looking to experience Halloween as famous personalities.

8. Patoranking being the face of Nigerian dancehall in Celebrate Me’s video and more 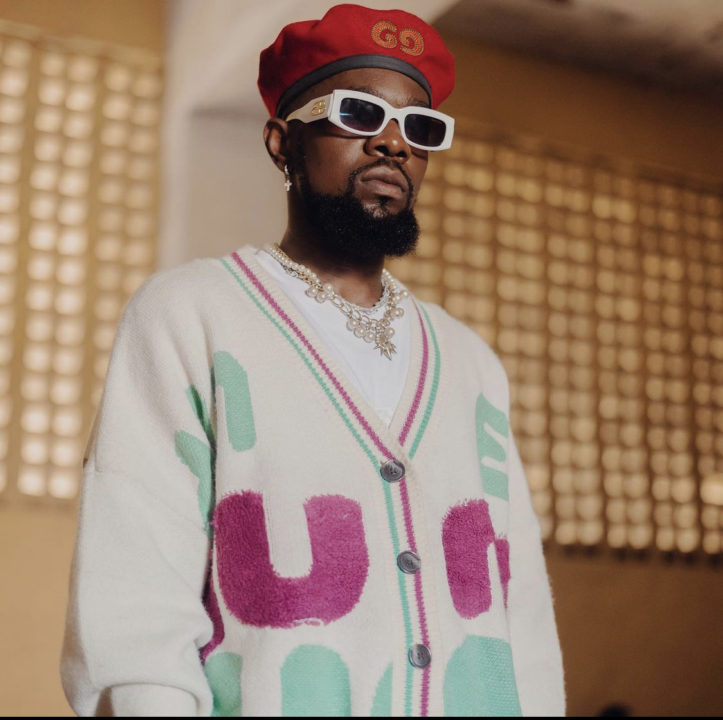 An undisputably powerful record from the leading face of Afrodancehall, Patoranking who never fails to cross his Ts and dot his Is where style is concerned, showed up as a swankly styled general for the video of Celebrate Me. Achieved with a red beret and a large multicoloured cardigan layered over a white t-shirt and touched up with diamond necklaces. Everyone loves a good dancehall-inspired look so chopping Patoranking’s outfit up for Halloween would definitely earn any partygoer a thumbs up.

There are also moments of Patoranking chanelling African royalty with sparkling gold agbada get up in the visuals for Mon Bebe and then his suit and wrapper-topped look for the visualizer of the acoustics version of I’m In Love.

Beanie atop head, smoking pipe in mouth, to style a simple sweatshirt, Olamide had understatedly manifested his godfather status on the cover art of his latest album, Uy Scuti, giving every inch of Halloween cosplay inspiration fans of the hip-hop veteran would need. 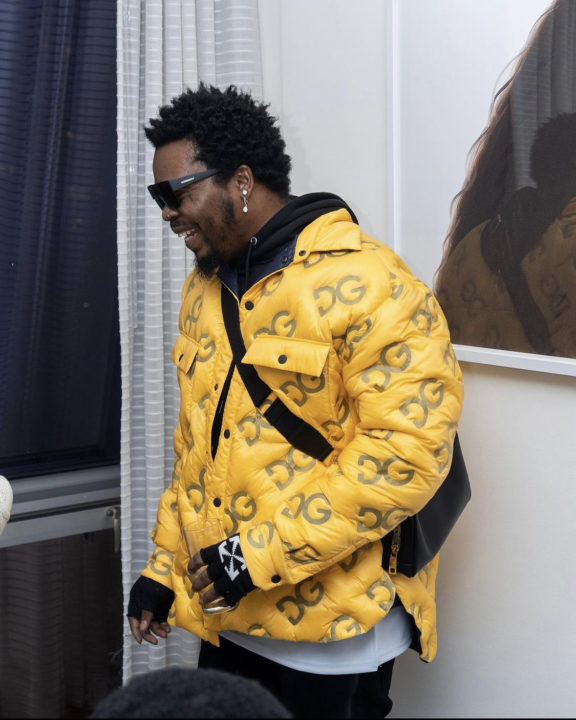 Olamide’s expertly layered moment in a logo-embossed padded yellow jacket from Dolce and Gabbana, paired with a hoodie and fishnet gloves was also a moment lovers of streetwear may choose to cosplay the star as.

10. Tems’ Rebel Gang leader moment in The Key and more

Smooth, sultry and fresh, Tems has stolen several hearts with her vocals and also her Dunsin Wright-styled looks. Playing the role of the Rebel Gang leader to a tee, Tems had unknowingly provided a look for the Halloween mood boards with her warrior princess moment in The Key with her scarf top and leather pants look that was finished off with a sword slung fiercely behind her. 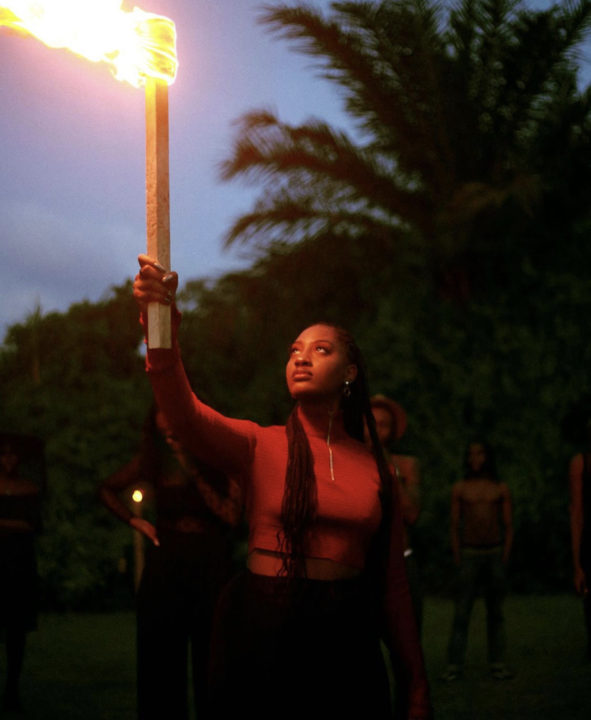 Another Rebel Gang leader look was her outfit at the closing scenes of her Try Me video where she had on a cropped turtle neck racer top, flared pants and a lit torch hoisted above her head. A poster girl for new school elegance, Tems’ co-ord pants set styled with a bejewelled bra to set off her heavily beaded braids is another look Halloween lovers could pull for a luxe costume.