Kingdom Is The Winner of #NigerianIdol Season 6!

The sixth season of the Nigerian Idol talent show has finally come to an end, and Kingdom has been named as the winner of this year's edition. 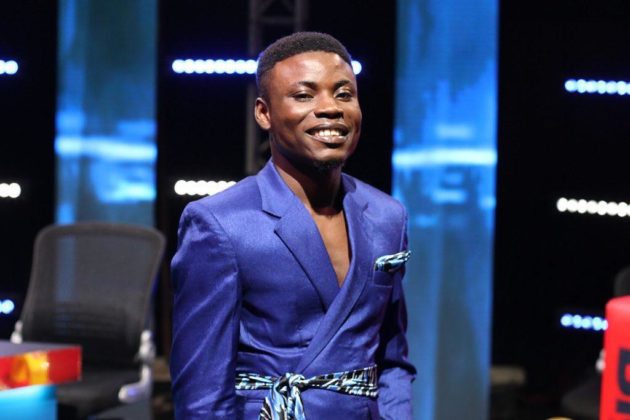 The final episode of the show was aired on Sunday, the 11th of July 2021. Kingdom was named winner of Nigerian Idol after an exciting 8-week competition which saw him beat fellow finalist, Francis at the final show this night.  The organizers announced his win via their Instagram stories. They wrote, "...and the winner is @IamDKingdom #NigerianIdol #TeamKingdom how happy are you?" 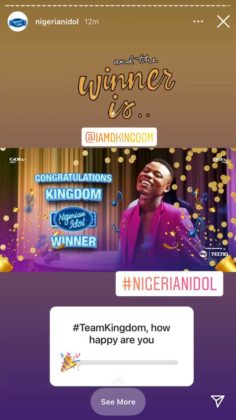 The show started with a performance of Master KG's 'Jerusalema' by the Nigerian Idol host, judges, ex-contestants, and finalists. The families of the finalists were also pictured in their seats during the show. Then Ice Prince performer his hit single 'Kolo', before Francis got on stage to perform Fela Anikulapo-Kuti's classic, 'Yellow Fever'. For his solo performance, Kingdom also picked a Fela song, instead opting for 'Gentleman'. Mavin Records act, Ayra Starr was on stage performing songs from her self-titled EP.

For their duet performances, Francis opted to perform a cover of Chike's 'Roju' with the singer himself. Kingdom performed Cobhams Asuquo's 'One Hit' with the legendary producer and songwriter. They both delivered superbly to the delight of the audience and viewers from home.

READ ALSO: Comfort Has Been Evicted from Nigerian Idol at Top 3 Stage

Kingdom was named winner of the Nigerian Idol season 6 show after beating off competition from Faith Mac, Dotun, Clinton, Daniel, Beyonce, Emmanuel, Faith Jason, Comfort, and Francis. This brings to an end an amazing edition of the show which was in the news during this run for different reasons. Nigeria Idol judge, Seyi Shay was in the news earlier during the audition process for being unnecessarily hard with her criticisms.