#EndSARS: Court Orders Probe Of Davido, Wizkid, Tiwa and others

With reference to their active participation in the nationwide EndSARS movement via Twitter, human rights activists, KeneChukwu Okeke made a criminal complaint against 50 individuals amongst which were music stars and other prominent influencers. 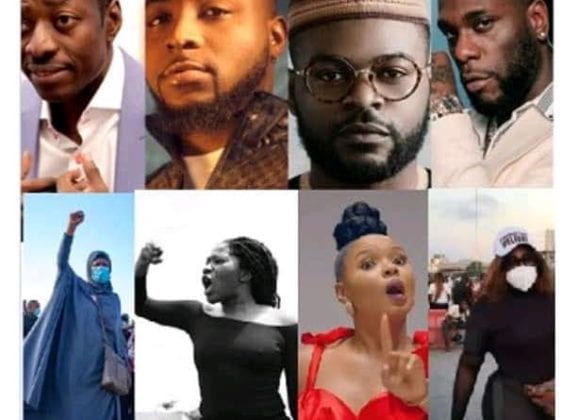 The complaint against Wizkid, Davido, Don Jazzy, Tiwa and others was made by KeneChukwu on the 9th of November 2020 and the criminal complaint reads:

The complaint KeneChukwu Okeke, a human right activist of plot 224 Gana Street Maitama Abuja who upon oath (affirmation) states that 1st to 50th accused persons hath between 3rd day of October, 2020 and 28th day of October, using Twitter, an internet web resource with URL (https://www.twitter.com) within the jurisdiction of this honorable court, did conspire amongst themselves to commit misdemeanor, to wit, promoting or acting with intent to assist the promotion of an unlawful assembly under the guise or composition of #EndSARS and thereby committed an offence punishable under Section 97 (2) of the Penal Code Act, C53, Laws of the Federation of Nigeria, 2014.

READ ALSO: The Influence of Music Stars In the Nationwide #EndSARS Protest.

Thereafter an order to investigate the protesters was given by Chief Magistrate Omolola Akindele of the Wuse Zone 6 of the Magistrate Court. Akindele gave the Police two weeks to conclude their investigation so that trial of the case would commence. 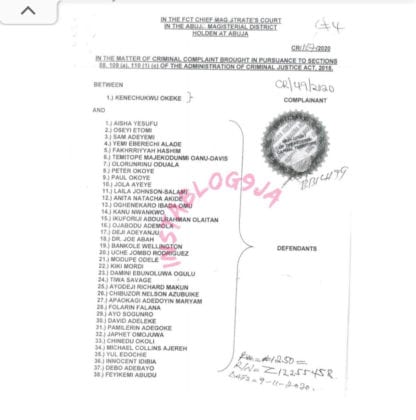 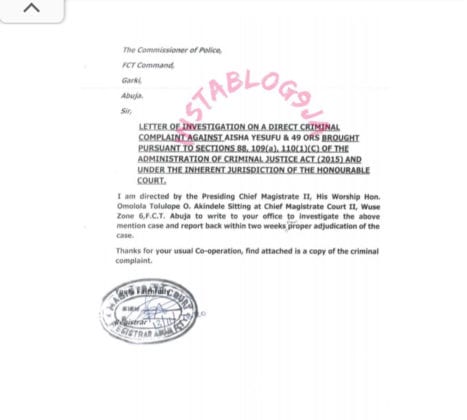