"The Industry Wants to Dictate to Females..."- Tiwa Savage Speaks to Ebuka on Sexism in Music

Tiwa Savage revealed to Ebuka during the second part of her Black Box Interview by Bounce Radio released on the 9th of November 2020 - The talk was centred around Sexism in Music Industry, and Tiwa spoke her truth as usual.

I’ve been to an event and when I landed-- it wasn’t in Nigeria and there was nobody to pick me up. Like I had to call an uber. This is not when I started. It’s the ‘Ti-wa Sa-vage.’ But then another artiste who was Nigerian, who was male had 6 cars waiting when they landed after me (I’d gone into the hotel with my uber. All the cars had gone to this airport to pick up these other artiste. 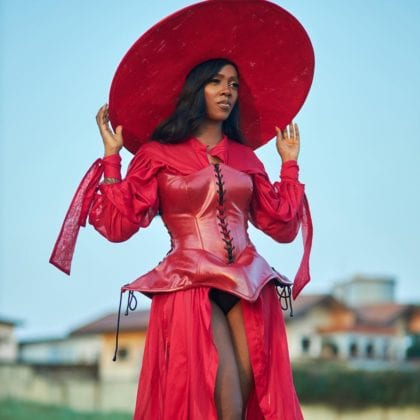 Prior  to this narration, Ebuka had asked:

Do you find your gender or your age has been a bigger problem?” This question was answered in the affirmative and gender had been the culprit.

To bring the conversation to speed, up till that point Tiwa Savage had been sharing on her experience raising Jamil as a woman in the entertainment sector. According to her, she often got chastised by people for drinking or having tattoos, on the grounds that she was a mother. Meanwhile, her male counterparts who were fathers multiple times got none of that.

“I’m raising someone that I know he’s already going to be exposed to so much so I want to be as transparent as possible with him. So  I’m ready for the day we’re going to have that conversation about that and just be honest and speak from the heart.”

Speaking on the gender challenges she faced, Savage opened up about the role gatekeepers in the industry play and took us behind the scenes through the eyes of a staff on her team who also works for Davido. This person was privy to see the difference in demands the industry gatekeepers such as OAPs make of Davido to those they make of Savage and how they always had unfair expectations where she was concerned.

Those are one of the things that gets to me that makes me cry because it’s like yo, you guys are gatekeepers... It’s how you present someone that the fans are going to… We go to a show, it’s who closes the show that’s going to get the loudest ovation. That perception is going to keep going, it’s like a vicious cycle.

Savage admitted to being stumped from trying to break the gatekeeping cycle as she spoke on having to put in extra work for her efforts to pay off in a male-dominated industry. With her experiences, she outlined how women are judged more harshly than their male counterparts despite doing more in some areas such as styling and live performances. She talked about her ‘Love Me, Love Me’ video being banned and some of her performances cancelled for being too sexy while her male colleagues had women doing similar things in their videos and never got any backlash for it.

Savage also spoke about how gatekeeping and male dominance affected her music releases as she was always mindful of the release dates of male artistes and how it might overshadow her work. However, for ‘Celia’, she threw caution to the winds, saying jokingly;

...at this point, if Jesus drops on the same day, I’m just going to pray.

Her chat with Ebuka brought up the issue of female tokenism in record labels when she narrated being turned down by Storm Records, EME and MoHits on her return to Nigeria. This was because they were already working with one female artiste.

The mentality of having only one leading female artiste was also discussed as Savage spoke about being constantly pitted against other female artistes and said it felt as if she was in a bid to knock her out.

When asked what female artiste’s emergence in the industry excited her, Savage mentioned Tems and Teni while paying respect to Simi.

The conversation moved to the Tiwa Savage and Yemi Alade's feud which was settled recently when Yemi Alade performed at the Everything Savage Concert. Ebuka asked.

How did that stage performance come about?

Savage admitted to calling her up personally and broke it down in detail saying;

Finally, they spoke on events that led to Kenyan singer, Victoria Kimani, calling Tiwa Savage ‘old African Bad Gal’ over reports that Savage had told radio stations not to play her songs. Savage denied doing any such thing and expressed that she’d been deeply pained and could never have done such a thing as she doesn’t feel threatened by anyone’s success and was once a fan of Kimani’s song.

What are your thoughts about this interview with Ebuka, and Tiwa savage's position on Sexism in the Music industry? Share with friends, and kindly leave your comments below, we'd love to read from you!