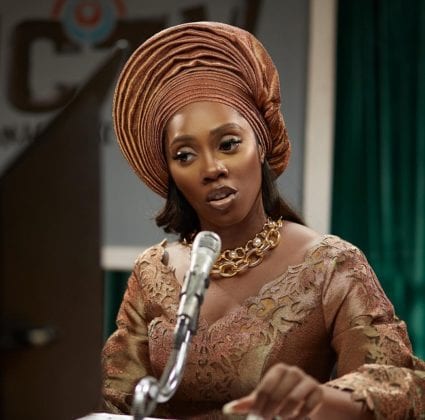 Nigerian singer, Tiwa Savage, fondly known as ‘African Bad Gyal’ or ‘Iya Jam Jam’ sat down with show host, Ebuka Obi-Uchendu to peel back some layers on her private life in a Bounce Radio interview.

The almost thirty minutes long interview touched on several aspects of the music star’s life such as her activism, moving to London, and rise to stardom.

Here’s a Condensed Version of all the tea Tiwa Savage Spilled;

The interview kicked off on a light-hearted note and Ebuka was able to get Savage to admit to a fear of flights.

The discussion soon segued to more serious topics where Savage affirmed that her NGO, We Are Tired, was birthed from the online trend when cases of gender-based violence were on the rise. With it, she aims to provide legal aid for victims.

When asked about her belief in the EndSARS protests, she said it was a means to an end and believes in it.

Savage made rare mention of her dad and this highlighted how much of a mummy’s girl she is. This was corroborated by her as well as her album 'Celia' which is named after her mother.

At age 10, she found out her supposed holiday to London was actually a permanent move and found growing up in the city daunting.

Savage was bullied by her schoolmates and suffered name-calling and physical harassment. It got so bad that she tried to bleach her skin and attempted suicide twice. Eventually, she had a police escort move with her in school.

She stumbled on her vocal talent at age 15 when she auditioned for a school play in a bid to get her crush’s attention. Her newfound talent elevated her in the eyes of her schoolmates and brought an end to the bullying. From here, she started to get back up gigs. She has done backup gigs for George Michael, Maryjane Blige, and even Whitney Houston.

She decided to pursue a career in music in her 20s  and moved to America to study after she got some words of advice from a drummer who played for the Black Eyed Peas.

Tiwa Savage's journey to fame was however not linear. Along the line, she had to stay in a shelter for underprivileged and abused girls for 6 months after school.

After hustling undercover, (due to a lack of work permit) by singing at weddings and waiting tables, she saved up and moved to New York. Here, she got a publishing deal and moved to L.A with the money.

When asked if her mom was aware of her moves and if she made them alone, Savage admitted to being an adventurous loner and a shy person. She also pointed this out as the reason why she had no bridal train on her wedding day.

At L.A, she started to get placement deals after pitching her records to various A&Rs. Eventually, she met Babyface and had a conversation with him about Fela Kuti. From there, she became invested in the Nigerian music scene and decided to come back to do ‘African music.’

The insightful interview was shortly rounded up with a teaser for the second part that begs the question; ‘Is Tiwa Savage a feminist?’

While in the past she’d denounced the title, there’s every reason to believe she just might be.

There’s also another question that weighs heavily on the minds of her fans. It is as regards her relationship with Wizkid which has been rumoured to have hit the rocks.

Ultimately, we’re glad Tiwa Savage never got round to bleaching her skin or taking her life and discovered herself to become the African Bad Gyal that she is now.