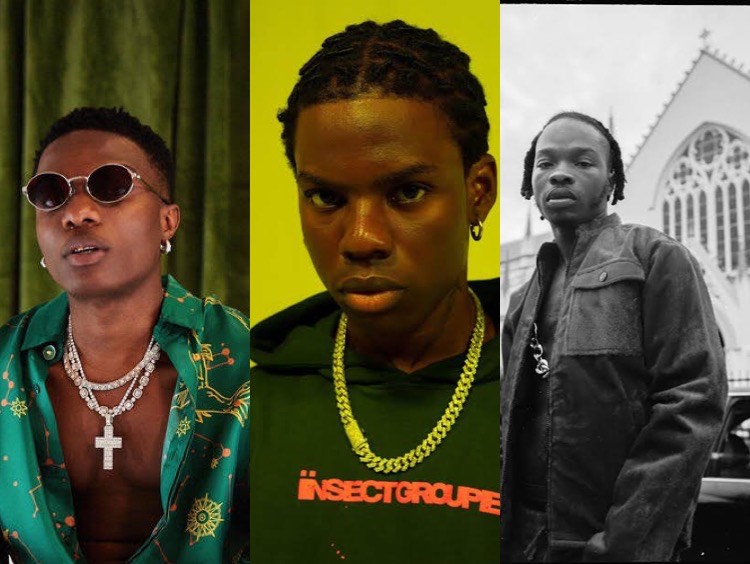 Hottest Songs in Nigeria So Far in 2021

As humanity works overtime to scrub off the scent of Covid-19 which rampaged for the most part of 2020 and threatens a devastating resurgence, we’ve all witnessed a boom in outdoor activities globally and in Nigeria as well where everyone is eager to seize the day in the running ‘We outside’ movement. Entertainers and musicians are not left out of this and have doubled down to create soundtracks to support the wave and thanks to this, we’ve had a sonically hotter year, with the airwaves taken captive by banger tracks after banger tracks.

To serve as a stamp of the times and give props as and at when due, Notjustok has racked up a list of the hottest songs released from the last quarter of 2020 till June 2021, scoring them with metrics such as streaming numbers, street relevance, radio and TV popularity and of course, personal impression. Here are the hottest songs released so far in the first half of 2021:

Every music aficionado swears that this song is the new era version of what Ice Prince and Brymo did with the smash hit track, Oleku, and with the instantly enchanting hook from Buju that goes “I like the way I’m feeling now, omo e get one thing wey dey stress me but right now I’m chilling now,” backed up by LadiPoe’s cocksure and on-point rap flows, the ultimate feel-good song has earned itself the number one spot as the hottest song thus far in 2021 and one that will go down in the books.

Once upon a time, Nigerians jokingly mused that Wizkid’s talent was backed by a strong baba somewhere who fortified his hit-making abilities. Thatjoke has now been laid to rest but what hasn’t is Wizkid’s propensity to make evergreen hits. Indeed, he’d warned us with the words “Tems and I made magic,” but no one predicted that Wizkid would have Nigeria’s music charts twinning with that of the United States thanks to the magic he indeed created with Tems.

The new era of music has witnessed an impressive number of captivating breakouts and airwaves takeover by members of the younger generation and the pink-haired, eye patch wearing Ruger who’d touted himself as the pandemic is one of such icebergs in the sea of 2021, taking us all with him on his ride with Bounce of his Pandemic debut EP. In this case, no one is sinking, but rather, singing wholeheartedly along. And so we have in a bid to “Give what Belongs to Caesar to Caesar,” come to recognise his track as the third hottest in the country.

Last year, the DJs decided to take theirs by reaffirming their import in the Nigerian musicsphere with executively produced banger tracks. And while DJ Kaywise’s Phyno-featured Highway may have ended the year like the literal banger firecrackers tossed on the streets of Nigeria in Decembertime, it had also tided over into the new year as the streets, airwaves and the people just couldn’t get enough of it.

In a country where the ineffectual has a better chance at long term tenures and second term seats, Rexxie and MohBad’s KPK is the euphonic breath of fresh air that shows us that some good things in Nigeria also last as it has continued to be a source of joy in parties, streets and everywhere else it’s played.

Like talented siblings of the same mother, South African and Nigerian collaborations in music are events that have served to bring additional repute to both countries and the continent at large.  This narrative continues to hold sway with the South-African birthed sound, Amapiano which is rapidly making its way around the globe and made a crowd-rousing pitstop in Nigeria with the Focalistic, Davido and Virgo Deep connect on Ke Star.

Some songs take several weeks and even months to unsheathe themselves and slash through the airwaves as hit songs but not Olamide’s promo single for his Uy Scuti album, Rock. A singular submission by one of Nigeria’s most revered rappers, his switch to the pop side of life rapidly climbed the charts after release to become everyone’s party-starting anthem.

This song was immediately after release, heavily padlocked against radio plays by the National Broadcast Commission. A listen to the very first verse would reveal the reason why. But this did not stop the song from creeping past the NBC’s embargo to become a favourite on every other music playing medium and become another noteworthy Nigerian-South African musical exchange.

On this track, the master producer reclaimed his spot as a master hitmaker and recruited street hop sensations, Bella Shmurda and Zlatan to take us to church and the song, to unforgettable heights as one of the hottest songs of 2021 released towards the end of 2020.

Whenever Bounce by Rema comes on, the air becomes charged with an electricity to match the fervour with which Rema delivered the record laid over frenetic Don Jazzy produced beats. A clarion call to all booties to take the dance floor, the electric feel is easily played out as partygoers yield to the song to do just that.

A prominent hit-making voice back in the noughties, KCee resurfaced on the charts with the Okwesili Eze Group to thrill fans all over to his Christian highlife record that defies the language barrier to nestle itself in the hearts of several music lovers regardless of their ethnic orientation.

Joeboy’s music has often been likened to the much-loved noodle brand, Indomie for obvious reasons such as its brevity and more importantly, its ‘sweetness’ and instant and irresistible effect on its listener. On Show Me, these elements have been deftly combined to create a pop love song which like the noodles, is also widely loved.

Not many Nigerian musicians can boast of having a fanbase as diverse, loyal, and widely spread as Naira Marley’s Marlians, who are ready to ride for him once he calls. This Naira Marley effect came alive on his hit single, Koleyewon which saw the track become not only a street anthem, but a TikTok challenge with content creators hitting the drawing boards to interpret the defiant lyrics and spirit of the song in different ways.

This Fuji number may be the anachronism on this list but it has undoubtedly earned itself a spot with the reworked Mystro-produced version released with his Fuji the Sound EP in 2020 which has since become a party favourite everywhere and a soundtrack to owambe moments of the year 2021.

When Lojay’s Tonongo had been premiered, it hadn’t been to much PR fanfare, no one had known it would be the precedent for the much-loved LV & ATTN EP and many hadn’t noticed the Sarz collaboration on the track as it had instantly done what needed to be done and captivated its listener after the first listen.

ALSO READ: Sarz is Not Your Mate: 10 Best Sarz-Produced Songs

If Jon Snow of Game of Thrones was recognised as the King in the North, Flavour and Phyno are both equally recognised as the Kings of the Eastern Nigerian music scene. The two nobles had then pooled their powers to create the aptly titled Doings that instantly stirs up any gathering of Easterners whenever it is played.

The ownership and origin of the Shedibalabala hype song may be a highly disputed one between the Sunkkey Snoop, Toby Shang duo and Jerry Shaffer, Bobby Banks duo, however, the version of it uploaded on TikTok soon blew up to be one of the hottest songs in 2021, first as an online sensation and then on the streets.

A common trope on this list of the hottest songs in 2021 has been collaboration and joint effort from stellar artistes, producers and DJs, yet with enchanting hums that seem out of place when elements of the typical Nigerian hit song are being counted, Rema’s atypical sexually heated single has worked it’s way to the top of the charts to grant him a second singular entry on this list.

DJ Spinall’s ‘Top Boy’ moniker never fails to prove itself and his Fireboy-assisted Sere lends to that as they take us on a melodious journey that concocts images of the tropics and crashing waves by the beach.

A song as effervescent as the title denotes, Bling is a three-way collaboration that showcased the power and talent of acts of the new age of music and was one song that garnered impressive traction on social media with its fun video challenge spurred on by Blaqbonez’s hilarious marketing tactics.