Already known for his haunting falsettos and melodic love songs, while making a name for himself as the go-to guy for hip-hop hooks, no one foresaw the resonance and freshness Oxlade served on his sophomore project, Eclipse EP, which was released on the 14th of August.

Notjustok had an in-depth chat with the singer to touch base with him on his EP, his artistry and his origin story, offering fans an insight into the tragic as well as heartwarming circumstances that have led to his rise to fame. Here’s the crux of the Oxlade talk with Notjustok in 6 points: 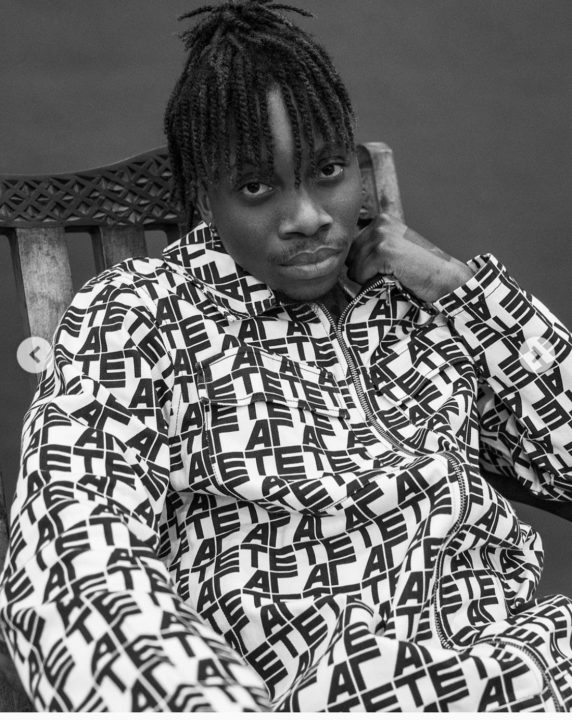 1. Oxlade talks to Notjustok: Growing up with his grandma and discovering his musical talents

While it is no news that Oxlade, born Olaitan Ikuforiji lost his mom when he was just three and grew up with his grandma ever since, Oxlade shared on what the latter part was like, stating that he’d gotten his musical inclination first from his grandma’s house where they sang praise and worship and he’d learned how to sing in that process. He also has musical ties with an uncle that’s a gospel singer and another who is a sound engineer.

ALSO READ: Oxlade is the Desert Rose Breaking the Mould with His Love-Torn Melodies

For Oxlade who said that making music was the only thing that made sense to him, he also shared the prophetic coincidence that led to him meeting 2Baba as a kid when the NGO that sponsored his schooling invited the iconic singer to an event convened by them. In a viral video that is now ten years old, Oxlade was recognised as one of the kids singing beside 2Baba, highlighting how dots always connect no matter how long it takes.

2. The journey from being OH Boy to Oxlade

Speaking to Notjustok, Oxlade shared that he had dropped out of the Lagos State University, LASU in his final year and as a result, had to leave home as most of his relatives, excluding his grandma, saw him as the black sheep. Leaving home, he found a haven with Naya and Ojahbee and together they were able to progress musically into household names in the industry with Naya blossoming into Nayaeffectz, as a prominent cinematographer and Ojahbee earning his chops as Oxlade’s manager. But before that, Oxlade had put in the work, taking CDs to locations like Fela’s Kalakuta shrine to play for whoever would give him ear.

ALSO READ: "I Was Extremely Introverted"- Here's the Gist of Tems' Talk with Apple Music

It was through his unrelenting passion for music he’d struck up a relationship with Blaqbonez and they’d made Mamiwota which resulted in being his breakout song. Speaking on this, Oxlade shared how he used to frequent rapper and producer, Alpha Ojini’s studio and had begged him to hop on a beat and upon being obliged, had gotten heard by Blaqbonez who had then requested that they work together. He’d shared that his professional name then had been ‘OH Boy.’

The journey from that point on had however not been linear as Blaqbonez’s management initially refused to drop Mamiwota with premise that it wasn’t hip-hop enough. According to Oxlade, when it had eventually been released, he had been in critical survival mode and couldn’t care less about making music but this had been a turning point for him.

From that point on, he had secured pivotal collaborations like Sing with Fireboy DML and Causing Trouble with DJ Tunez. For him, performing the latter at the 02 Arena upon’s Wizkid’s request and watching the crowd sing his lyrics back to him had served to reassure him that music was truly his calling.

Oxlade talks to Notjustok: Breaking out fully as Oxlade-- Oxygene EP & Away

When Oxlade put out his debut project, Oxygene EP, his promotional single, Away, was a fan favourite and soon became a hit song but in between the rise, the Covid-19 pandemic had happened and the world had gone on lockdown. Oxlade shared that this incident had greatly disheartened him and in his distress, he’d called his grandmother who had comforted him with the words, “For you shall thrive even in chaos” and soon after, Away had found wings and taken off as a hit. According to him, Oxygene is a miracle project as a result of its success despite the lockdown.

ALSO READ: Here's A Rundown of Every Musician Wizkid Has Brought On Stage At the 02 Arena

Asked about the motivation behind his unique sound which had taken fresher iteration on Eclipse, Oxlade shared that he’d embarked on a music-consuming journey where he had stayed off from making music and had listened to sounds from a diverse roster of acts from Pasuma to Enya and more.

“I made Eclipse during the darkest moments of my whole life because I was home in Covid” Oxlade opened up when asked about the significance of the title of his second project, Eclipse. For Oxlade, who assertively stated that making music is his job as he gets paid to create art, making Eclipse was also an escape in a time of deep strife and he shared that he broke down several times while recording Ojuju and had to take breaks from recording because he’d had a massive fallout with his partner at the time. Already a work in progress as far back as the lockdown days of 2020, Oxlade had even gotten arrested once while on his way to DJ Coublon’s studio to record. He however shared that while in the process of creating Eclipse, he realised that even in the darkest times, there’s always a ray of light, and this realisation had inspired him to title the project Eclipse.

While stating that he was able to make heartfelt songs from his experiences with love, he also opened up on being heartbroken, stating that this had influenced his switch from Oxygene were he was a bright-eyed and open lover to being the Oxlade on Eclipse, a guarded and traumatised lover.

Some months ago, Oxlade was present at the Off-White store launch in Paris, serenading the crowd to a performance of his hit single, DKT. He was also captured chumming it up with founder of Off-White and artistic director of Louis Vuitton menswear line, Virgil Abloh. When he was asked about the experience, Oxlade explained that he had originally been in France to expand his music, while also commenting that it felt great to meet Virgil, stating that the brand was family to him.

Oxlade also took the liberty to speak on his other interests, sharing that he’s begun dabbling in fashion while he might also premiere on our screens as an actor one day. The singer shared that he’d also love to own an NGO, stating that he operates with a very deliberate brand and sense of style.

6. Being an indie act and getting heavyweight collaborations

Oxlade’s Eclipse EP, in collaboration with DJ Coublon, was released through Troniq Music which upon questioning, he explained was a management company made up of himself and a couple of his friends. He also spoke to Notjustok on being an independent artiste without a record label deal, saying that he was deterred by caucuses, circles and godfathers in the music industry but had also through his success, proved to other singers that indie acts stood a chance regardless of the obstacles.

Calling himself strategic collaborations personified, Oxlade revealed how his feature with Ice Prince on Kolo happened, telling of how after Ice Prince had sent him a song he wanted him to work on, he had afterward sent him Kolo with the insight that it was more new generation inclined and Ice Prince had agreed and worked with that to create the song that grew to be the Kolo hit.

Read the full interview where Notjustok had a talk with Oxlade, click here.