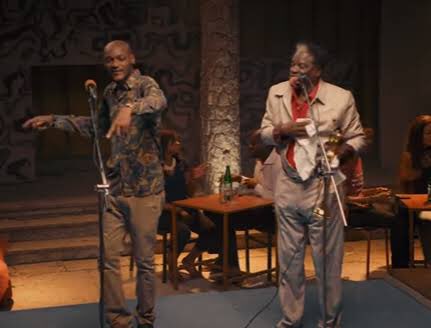 Dr. Victor Olaiya and 2Baba on the set of "Baby Mi Da"

Veteran Highlife musician Victor Olaiya is dead. At 89, the "Omo pupa" hit maker was confirmed dead on Wednesday afternoon. He had been admitted at the Lagos University Teaching Hospital at he was said to have passed at exactly 12 PM.

Victor Abimbola Olaiya (born 31 December 1930), also known as Dr Victor Olaiya, is a Nigerian trumpeter whose works feature prominently in the Highlife genre. He was quite famous during the 1950s and early 1960s, with Alhaji Alade Odunewu of the Daily Times describing him as "The Evil Genius of Highlife."

In 2017, Dr. Olaiya retired from music. But not before collaborating with 2Baba on the remix of his timeless classic, "Baby Jowo."

Many eminent Nigerians have reacted to his sad passing, with some touting his demise as the end of the Golden era of Highlife.

Devastated by the news of the passing of Dr. Victor Olaiya - maestro, mentor, legend. Thanks for the beautiful music. Thanks for the inspiration. Blessed for the honour of sharing a mic and stage with you. Rest in peace baba.

My condolences to the family of Nigeria’s highlife legend, Sir Victor Olaiya, OON. His artful delivery on the trumpet and his hits from the 50s are moments we’d never forget. Most recently, the duet with @official2baba, was a musical bridge to travel. May his soul Rest In Peace. pic.twitter.com/xa9VNambw5