Nigerian singer, Oxlade has disclosed in his recent interview that Wande Coal was the major inspiration behind his music and career.

Oxlade told Beat FM during the interview that he will forever be in awe of Wande Coal due to the level of impact he had on him as a person and his music. The interview was aired on Thursday, the 19th of August 2021. 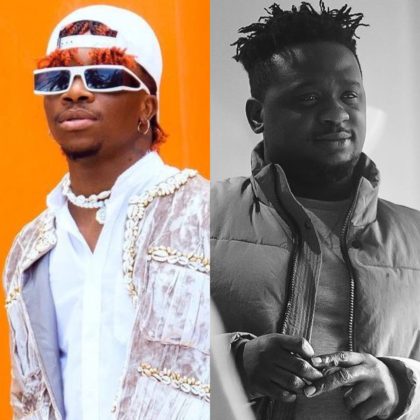 Oxlade was asked by Nadine of Beat FM if there's any artist he still gets starstruck by and he promptly mentioned the veteran singer. He said that Wande Coal literally impacted his sound and how he patterned his music. Oxlade also describes any comparisons of himself and the legendary singer as "arrant nonsense".  When Nadine asked what he thinks about people who try to compare him with Wande Coal, Oxlade says;

I think it's nonsense. I think it's arrant nonsense, like what's that? Sometimes, I'll be on Twitter and people will just tweet some things, and I'll be like these guys have started taking that thing again.

Wande is the reason I'm singing. "Mushin to Mo'Hits" is the reason I went to studio to record music. Falsetto, harmonies, melodies, and all that. Wande is clear o, please.

Oxlade did not only speak about Wande Coal during his Beat FM interview as he was also there to promote his new single, Ojuju. He also discussed his time in Paris recently and how he almost got signed by M.I. Abaga.