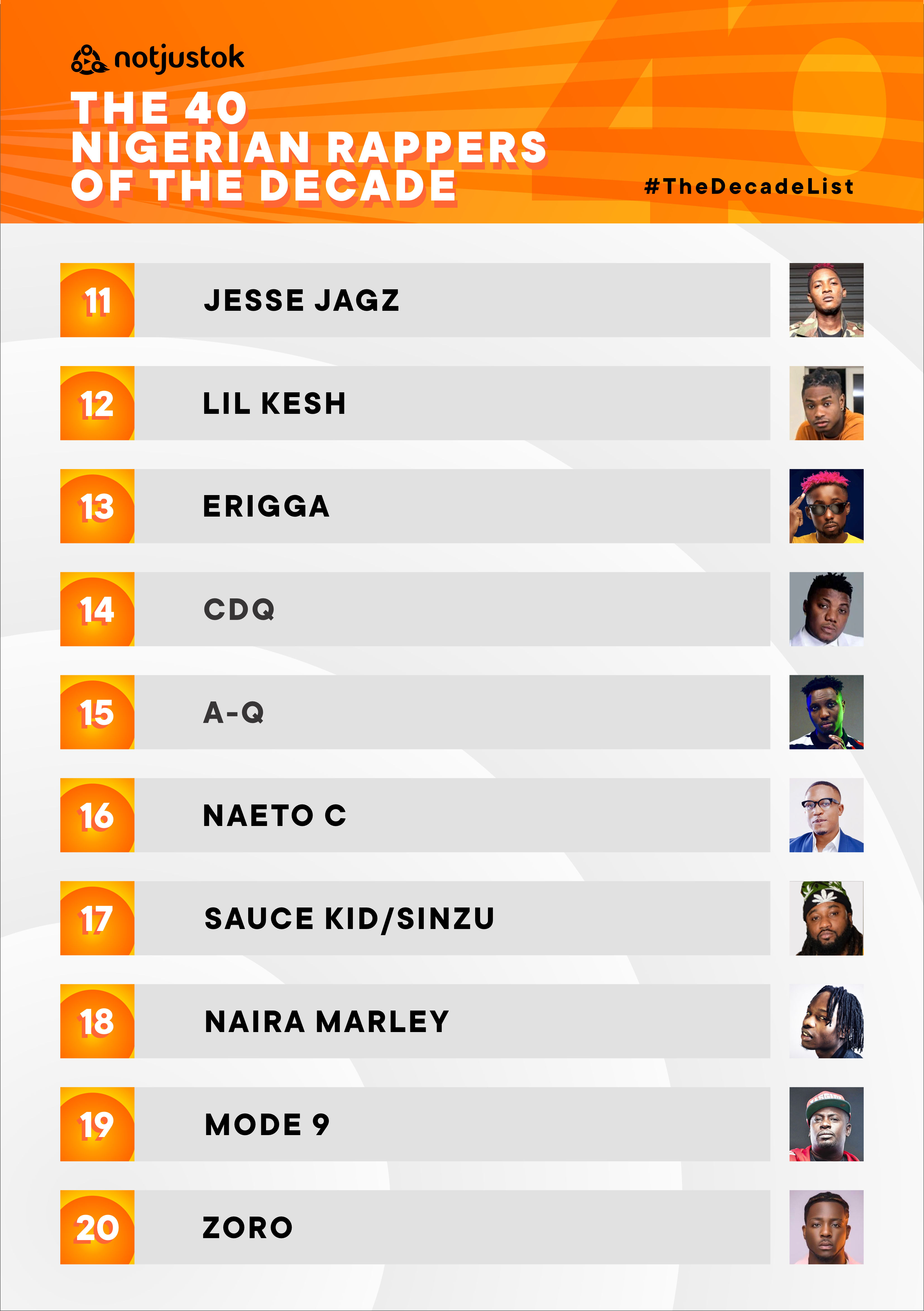 Born Owoh Chrismathner, the rapper is one of the acts repping the South Eastern part of Nigeria. His raps are fluid and with heavily influenced by the Igbo tradition. He got his breakout with the single "Ogene."

Modo, though he didn't achieve much relevance in Nigeria in the past decade (even though he had four albums), still makes music. And when one holds up the quality of Modenine's lyricism, he's got to be up here.

The Supreme Leader of the Marlians was another fiercely debated topic. Should the rapper, based on two explosive years feature in a decade list? Usually, the two year-rapper wouldn't. Or shouldn't. But Naira Marley is an enigma. For the many essays he's influenced, for the artistes who'll fancy a copycat approach to getting their own followership, Naira Marley is a thesis on his own.

Of course, music-wise, he's put in the work. J Hus once credited him with shaping the West African-influenced rap that belies the UK music industry; with "Soapy," Naira Marley made one of the most declarative rap songs in recent times.

Saucekid was hot property in the early years of the decade. His "Carolina" song with Davido was, at the time, the biggest song in the country.

With his arrest and jailing in the US (in 2017) for identity theft, his release the following year saw his career come to a full circle, as he was signed onto Davido's DMW. Late last year, he released an album Better Late Than Never, and its lyricism showed a wisdom and perspective which marked growth.

The only MC with an MSc. So don't be surprised when they jealous him. Lol. Naeto C's fluid and very American rap style got him a large fan base.

At the early years of the decade, with his singles and the 2011-released Super C Season, Naeto was practically a Pop star, and enjoyed relative success. His "Tony Montana" song (and the remix with D'banj) remains one of the biggest rap songs to emerge from Nigeria.

Known for his fiery rapping, A-Q is one of the most consistent rappers in the game. He released three albums in three years: Rose (2016), Blessed Forever (2017), and Crown, a joint project with Loose Kaynon in 2018. The first two of those albums are considered classic projects and Crown got him and Loose Headies recognition in the "Best Rap Album"; in the same year, A-Q went home with the Golden Head for Lyricist on the Roll. It was the first time he'd won it, after being nominated several times in the past.

As a co-owner of 100 Crowns, A-Q has also contributed to the growth of up and coming acts, most famously the rapper Blaqbonez. He's also the man behind The Coronation, an event which is steady gaining repute as the number one Hip Hop show in the country.

Ever since his feature on Masterkraft's "Indomie" (2014), the rapper has moved on from strength to strength, consolidating on his ghetto appeal to drop songs that have been massive within the streets.

He has two albums (Quality and Ibile Mugabe), and while they seldom garnered critical acclaim, they were both successful commercially, especially the former. His influence on Street Pop also lands him here.

The rapper who's known for his vivid tales of the streets has an incredible fan base. Loved for his lyrical prowess, Erigga's raps (which are mainly delivered in Pidgin English) are like tourist guides into places where your safety isn't guaranteed.

Erigga has two albums and two EPs, with his latest project being The Erigma 2, a project which satisfies the dual standard of critical acclaim and commercial impact. Just recently, the album hit 7 million streams on Audiomack.

In 2014 Lil Kesh released "Shoki" and his career was never the same. The song had his YBNL boss Olamide and Davido on its remix. The following year, he was nominated for Best New Act at the 2015 Nigeria Entertainment Awards.

Lil Kesh quickly consolidated on his stream of successive singles ("Gbese," "Efejoku," and "Is It Because I Love You?") by releasing his debut album Young And Getting It (YAGI) in 2016. It was his first and only album under YBNL as he moved on from the label, setting up his own imprint YAGI Records.

The Abaga son, at the start of the decade, was a rapper who feature heavy Pop influences on his songs. 2010's Jagz Of All Tradez featured Northern-influenced maximalist production, with Jesse constantly declaring himself "the greatest." That claim would be somewhat realized on his third album (Jagz Nation Vol. 2: Royal Niger Company), released four years later. The project is widely considered how magnum opus.

Jesse Jagz would've been ranked higher on this list was he more consistent, or has more numbers. He however, has an album scheduled for release this year. Perhaps that will make up for those discrepancies.