Manchester United's midfielder, Bruno Fernandes, has called on himself and his teammates to look into the mirror to find the on-field problems going on at the club. 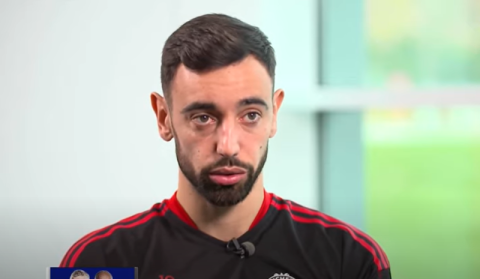 Fernandez was speaking in an interview on Manchester United's website, the club's channel for interviews and passing of information to the fans.

He believes the team is not giving enough performance on the pitch, hence why they concede goals.

We know we can do much better and we know this is not enough for a player who is representing this big club. We have to look at the mirror.

I'm saying again the same things probably from the last interview, but that's it. We have to look at ourselves, everyone at his home, understand what they can do better to help the team. We just have to apologise to the fans and that's it, because it was not good enough for us. Great atmosphere they create. They pushed us until the end. They tried to give that energy to us, but from us, it was not enough.

The Portuguese also spoke about the timing of the goals scored during the game. He described it as bad timing.

It's always a bad time to concede a goal. The problem is the way we concede goals. It's too easy. As I said many, many times, if it was not David again, the result could be much higher and worse for us. We have to protect better, David, because he is protecting us a lot and we have to help him because he cannot make every game. eight, nine saves and then still concedes goals.

Manchester United play their next three fixtures away from home, Watford and Chelsea in the Premier League and Villarreal in the UEFA Champions League.