Manchester United's new signing, Cristiano Ronaldo, has arrived in Manchester to meet up with his teammates. The Portuguese was released from the Portugal camp after he received a yellow card in the game against the Republic of Ireland. 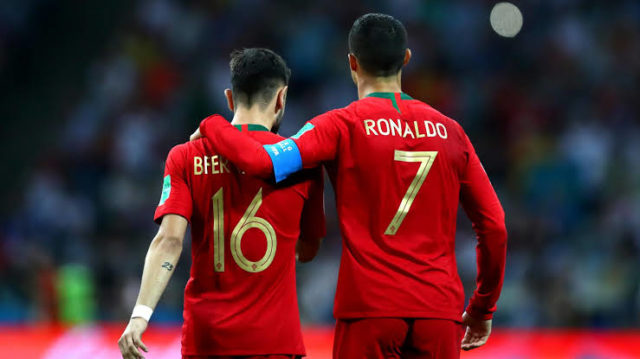 The city of Manchester is already buzzing following his arrival and fans of the Red Devils will look forward to having the attacker play at Old Trafford again. Ronaldo is coming into the camp with an elevated spirit after he set a record of scoring the most International goals by any player.

According to reports from the Sun, a source said, Cristiano Ronaldo has told his Portuguese teammate, Bruno Fernandes, that it's time Manchester United wins trophies again.

He also said the players need to believe that they can win trophies and must work hard to achieve that at the end of the season.

Ronaldo has also spoken to Bruno Fernandes and told him to tell the other players that they need to win this year.

They need to work hard and start to believe in themselves. The players have not stopped talking about Ronaldo since he signed and they can't wait to train and play alongside.

The source also confirmed that the fans, players, and backroom staff are all excited about the signing of Ronaldo and there is a fresh air of optimism around Old Trafford.

Lots of the staff who looked after Ronaldo when he arrived at the club as a shy teenager are still there and looking forward to welcoming him back.

Everyone is proud of what he had achieved in his career and they will be so happy if he managed to bring the good times back to Old Trafford.

Ronaldo played for Manchester United between 2003 and 2009, where he won three Premier League titles, one FA Cup, two League Cup, and the FIFA Club World Cup. He also scored 118 goals in 292 games before joining Real Madrid for £80miilion in 2009.