It was a mouth-watering game between Nigeria and Liberia at the FIFA World Cup qualifier on Friday, September 3rd, 2021. The Super Eagles were hoping to give the fans at the Teslim Balogun Stadium something to go back home with, while the Liberians were also hoping they will go back home with at least a point. 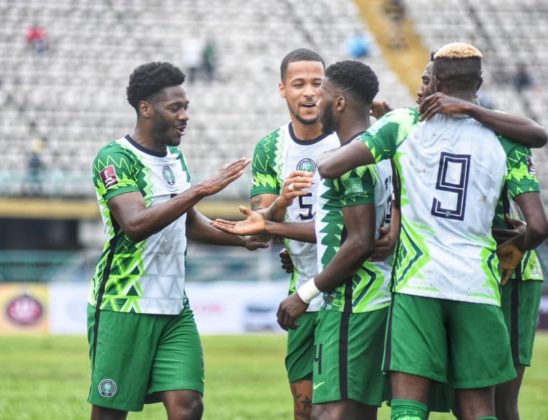 Liberia was coming into the game with a poor statistic against Nigeria. The West Africans have not beaten Nigeria since their 2-1 victory in a World Cup qualifier in Monrovia in 2000.

Nigeria dominated the game from the sound of the whistle, creating half chances, but none of these opportunities could find the back of the Liberian net. Kelechi Iheanacho sent the Lagos fans on their feet when he scored the opening goal of the game on the 22nd minute of the game.

Iheanacho’s goal put the Nigerian team on a high spirit as they created more chances to extend the lead, but they did not take advantage of their pressure. The next chance of the game fell to Victor Osimhen, but the striker missed a sitter to extend the Super Eagles lead.

The Pressure finally paid off for Nigeria as Kelechi Iheanacho got his brace and the second for Nigeria with seconds away from the halftime whistle. The half-time ended 2-0 in favor of Nigeria.

It was business as usual for the Super Eagles, as they dominated most part of the second half, creating chances. The highlight of the second half was when Ahmed Musa came in on the 86th minute of the game to register his 99th appearance in Nigeria.

The game ended 2-0 in favor of Nigeria. The Super Eagles top Group C going into the game against Cape Verde on Tuesday, September 7th, 2021.