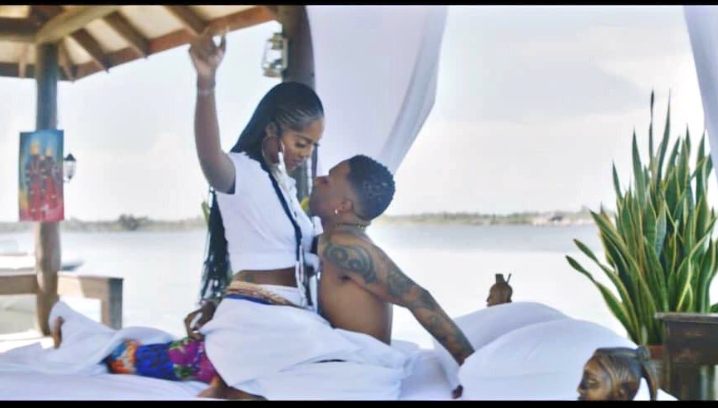 Tiwa and Wizkid on a music video set

Yes, Wizkid pressed Tiwa's yansh and at the One Africa Music fest in Dubai and the internet cannot let that go!

Twitter is presently reacting to the performance between Wizkid and Tiwa at the One Africa Music Fest in Dubai which took place on the 15th of November. The Nigerian singers performed their single, Roboskeske on stage and during the performance, Wizkid, in lack of more effective description, PRESSED Tiwa's backside popularly known to Nigerians as "Yansh". In the video, Tiwa's immediate reaction showed she wasn't cool with it but then again, Wizkid seems to have looked pretty comfortable PRESSING it.

This "pressing" act is stirring reactions with fans saying Wizkid only brings Tiwa on stage to pull off stunts like these and that it is disrespectful and embarrassing.

Here are the reactions... what do you think?

This is just disrespectful, disgraceful, disgusting and embarrassing. Even Tiwa savage reaction tells it all. But wizkid who sees women as “money hungry hoes” obviously don’t know the line between catching cruise and harassment#oneafricamusicfest pic.twitter.com/U4A5JS9OX2

This Wizkid no get respect o! See as e grab Tiwa yansh. Tiwa didn’t like that. https://t.co/dxcEQvppo2

What roboskeske as really caused ehn,. it keep making Wizkid et Aunty Tiwa bestie going beyond human comprehension... Where is my own Roboskeske bestie?? pic.twitter.com/36x7HenM2v

WizKid and Tiwa would just be giving this twitter Street something to talk about with their vibes and TAPPING current..and we all would smiling and shaking our heads pic.twitter.com/kJyESLD12Y

Am I the only one who thinks this wizkid and tiwa savage’s thing is embarrassing???? Like tf “Aunty Tiwa”

2017?
Tiwa has never for once stop being relevant.

Just say you don't like her relationship with Wizkid. https://t.co/lf5oKwDweS

How many shows has Wizkid done this year without calling out tiwa savage to comman shake her "soft to press" yansh? Is that his selling point now?