CEO of Peruzzi's former label Goldenboy Entertainment, King Patrick has denied any involvement in leaking an old mixtape of the singer titled 'The Leaktape'. 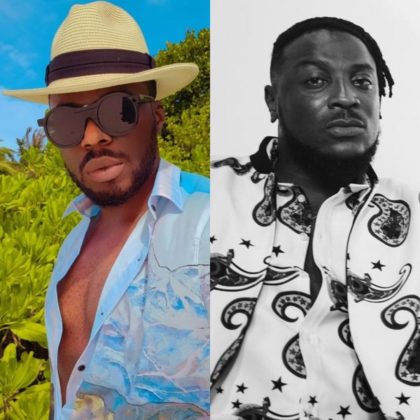 King Patrick responded to our recent report via his Twitter page on Sunday, the 20th of June 2021. He replied that he had nothing to do with the release of any Peruzzi project titled 'The Leaktape'. According to him, the singer has no rights over the projects and should not be bothered about it either way as they're protected under copyright laws. He further promised to look into the leak. In his words;

Don't know anything about any "Leaktape by Peruzzi". Either way, he has no rights over the records and should mind his business accordingly because they're protected under Copyright laws. My Copyright. Will definitely look into it. 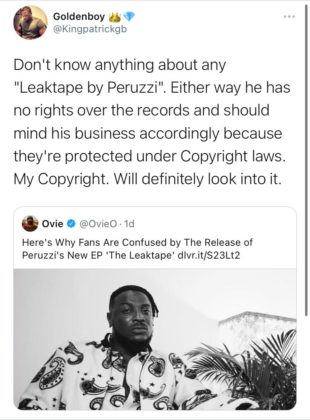 READ ALSO: Here's Why Fans Are Confused by The Release of Peruzzi's New EP 'The Leaktape'

Recently, We reported that there was a new Peruzzi EP titled 'The Leaktape' on all digital platforms. Fans were confused about this and we tried connecting the dots. King Patrick has now denied any involvement in the leak of Peruzzi's old tape. However, he has promised to look into where it is from.