Cuppy Admits Passion for Music Keeps Her from Quitting

Nigerian singer and DJ, Cuppy has admitted that she would have quit music a long time ago, but her passion has kept her strong all this while and still keeps her going. 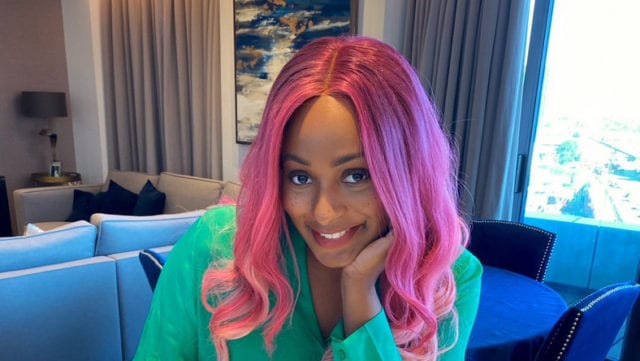 Cuppy revealed this via her Instagram stories on Friday, the 28th of May 2021. Encouraging people who are currently in a bad place, Cuppy said that disappointments and bad day are a norm for people chasing their dreams. She implored people to always follow their heart, citing passion as the only thing that has kept her from quitting music. She writes;

Follow your heart and do your job wit PASSION....

When following your dreams, there's going to be so many bad days and disappointments. That's the TRUTH.

Passion is the only thing that keeps me from melting down or from quitting.

My brand is all about proving that I can make money whilst doing what I want and still be responsible, and still be happy, and make also my family proud 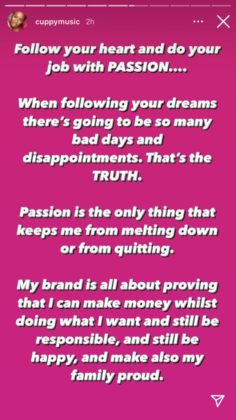 Cuppy moved from being just a DJ to releasing songs as an artist when she dropped "Green Light" with Tekno in 2017. The song was largely successful but Cuppy has been slated by various parts of the internet, with many calling her music terrible. She has however not let any of that get her down, and she went on to release the more succesful "Gelato" with Zlatan in 2019, before dropping her "Original Copy" album in 2020 which had hit songs like "Feel Good" with Fireboy DML, "Litty Lit" with Teni & "Karma" with Stonebwoy.

Cuppy is not going to let bad comments get to her, and she made this clear in her Twitter rant last month where she said she no longer felt the need for  praise or validation from anyone.