Nigerian singer, Burna Boy has finally received the Grammy Awards Plaque for his 2020 win. His ‘Twice As Tall‘ album was victorious in the Best Global Music Album category. 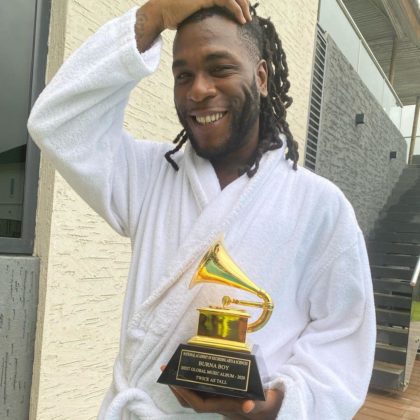 Burna Boy announced this via his Instagram page on Thursday, the 10th of June 2021. He posted a photo of himself with the Grammy award, along with a video of himself and longtime producer, Leriq. The singer expressed his delight at receiving the award and remarked that it was a result of his parent’s prayers. In the video, Leriaq can be seen visibly excited and asking, “Have you ever seen a Grammy?” Burna Boy wrote;

Early Morning deliveries from across the pond! 😪
–
My parents prayed for excellent children, not houses, cars or “things”. They asked my sisters for stellar degrees; one got a first class in Finance, the other got a Distinction in Engineering. They asked me for a Grammy, and here we are. I am a product of sacrifice! Thank God and thank you all again! ❤️

READ ALSO: “I Did It On My Own” – Burna Boy Reacts To GRAMMYs Win

Burna Boy’s “Twice As Tall” album which won him the Grammy Award has been described by many as a masterpiece. It has hit songs like “Way Too Big“, “Monsters You Made” featuring Chris Martin, “23” and many more. The album also had the legendary Diddy on as executive producer.