Iconic Nigerian singer, Asa has shared a new video that shows her performing with highlife band, The Cavemen and Ghanaian songbird, Efya.

Iconic Nigerian singer, Asa has shared a new video that shows her performing with highlife band, The Cavemen and Ghanaian songbird, Efya. The video was shared via her Instagram page on Wednesday, the 8th of September 2021. 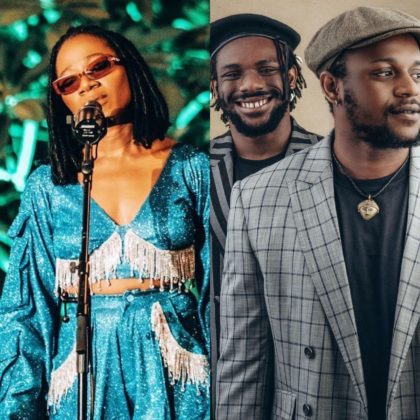 Asa and the Cavemen

Asa was recently reported to be working on a new song with rave of the moment, Buju and there's a video of them recording together. She has now shared another one of her live performance sessions with the Cavemen and Efya. Asa wrote, "Ok ok @the.cavemen + @efya_nokturnal".

In the video, Asa is singing with one-half of the Cavemen while strumming her guitar, the other half playing his own guitar while Efya handled the keyboard.

The Cavemen are a fast-rising highlife band out of Nigeria. They recently performed at their first Headies award show and even grabbed an award for their debut album, Roots. The Cavemen were also seen recently with Wizkid when he attended their own show in Ghana.

WATCH THE VIDEO OF ASA'S PERFORMANCE BELOW: