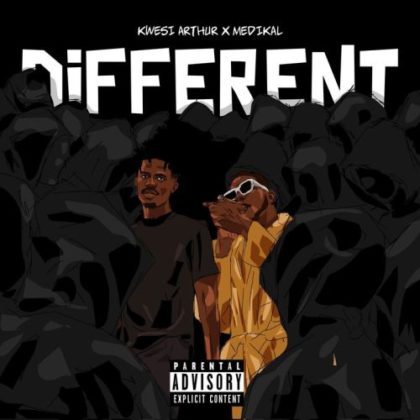 In anticipation of his upcoming album "Song of Jacob", multiple award-winning rapper Kwesi Arthur displayed his lyrical prowess on the newly released hip-hop tune 'Different', alongside his Ghanaian compatriot Medikal, who was recently arrested by the Ghanaian police for brandishing a pistol on social media.

The 2-minute song 'Different', released on 28th of October 2021 is a follow-up to Kwesi Arthur's last tune 'John Wick (Freestyle)' and it was produced by Ghanaian talented beatmaker Shadxw.

Taking to his Instagram page to announce the new song, Kwesi Arthur stated that the collaboration with Medikal was long overdue but God's time is always perfect. He wrote:

People been saying this collaboration is long overdue but God’s time is always perfect 🕰 Myself and EL Chairmano @amgmedikal 💎🐐🤞🏾 DIFFERENT AUDIO OUT NOW!

Kwesi Arthur whose real names are Emmanuel Kwesi Danso Arthur Junior (born 18 December 1994), is a rapper and musician from Tema, Ghana. He was nominated for Best International Act at the 2018 BET Awards. He is currently considered one of the best young artists in Ghana and Africa. Kwesi Arthur began to pursue a career in music after listening to Drake's debut album, Thank Me Later. In 2015, he released the lead single "Grind Day" from his debut EP, Live from Nkrumah Krom (2017).