“The #14thHeadies, it's time to explore!” is one tagline that came alive on the 21st of February, 2021 which several years from now, will be remembered for several reasons. One of which will be the additional credence and clout it gave to some industry players-- old and  new, the snub, sting and spur it gave some other expectant players, and the year-long consolidation and acknowledgment of days of creative toil and hard work of the industry hands. But there was more to the Headies than that, other than such significances of the show, here are the things we loved best about the 14th Headies: 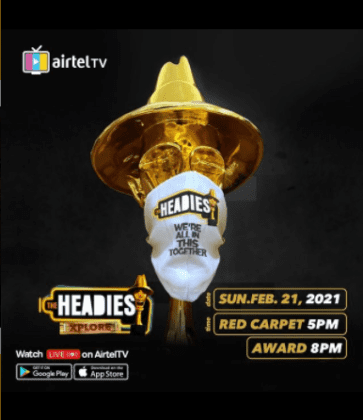 Music like humanity, will always continue to evolve and break new barriers. The panelists that deliberated on the categories for the #14thHeadies awards showed that they understood the need to flow with the times by creating new categories that reflected the burgeoning narrative shift and creative forwardness of the industry.

These categories include that of the songwriter of the year, Best Alternative album, Hall of Fame and Special Recognition.

Thanks to the internet, we’re now in an era where creatives do not have to wait till a totally unpredictable twist of events gets them recognition and people can now get their flowers in due time. This is the case of the breakout acts and newbies that made it through in 2020, the year in review where they made a name for themselves. The Cavemen are some of the people who received their well-deserved flowers. As well as Omah Lay, the breakout wonder of 2020. Another is veteran rapper, Eedris Abdulkareem who won the Special Recognition award. There’s also Fireboy DML who went home with an armful of plaques.

With 5 wins at this year’s Headies, Fireboy DML officially joins P Square (2006) and Wande Coal (2010) as the most awarded artiste in a single night. A champion 🏆 #14thheadiesaward pic.twitter.com/ZbH5BDJjIq

Over the years, the Headies has gradually lost some of its hype and reputation due to one reason or the other. As a result, it has been soft snobbed by most heavyweight artistes. But Wizkid had made the #14thHeadies an epoch moment by gracing it, silently giving more grease to the elbow of the younger stars who aspire to tread the path he’s taken and beyond, while also lending the Headies some credence from his ever-flowing purse of goodwill.

While the organisational ethos of the Headies will be discussed in another section, one thing that was largely and undoubtedly enjoyable was the musical cypher where the contenders for the Rookie of the year category held down the night with highlights of their hit records.

So we had Alpha P pass Olakira the mic to sing his In My Maserati, after serenading us with Paloma. Afterwards came the winner of the Rookie award, Badboy Timz to put some groove in our seats with MJ. The mic next travelled from the hands of Zinoleesky the Mapariwo crooner to Jamopyper who sang his heart out to If No Be You.

The 2016 Headies will not leave anyone’s mind in a hurry and it’s mainly due to the Don Jazzy and Olamide drama that ensued after Reekado Banks won the award for Next-rated, a category which had Lil Kesh nominated on as well.

There was no drama at #14thheadies but rather, a lot of good energy as we all witnessed a night of high spirits and good vibes from several new acts paying their respects to Wizkid, to the aforementioned musical cypher, then Omah Lay giving a shout-out to other contenders in the Next-rated category which he won, there was also the hlarious videos of Bella Shmurda hanging out with Omah Lay and Oxlade.

ALSO READ: Badboy Timz is The Rookie of the Year at the 14th Headies

Here are the things we’ll love to see an improvement on ins subsequent editions:

The Headies have become famous proponents of the concept of ‘African Time’ by starting their award shows late and the #14thheadies was no different. This time, due to it’s livestreamed feature, several viewers got an earful of the show’s tagline before the show started as they had to wait for several minutes and then hours for its commencement.

Due to this, we couldn’t fully appreciate the beauty of the stage setup and the looks that were served by the show hosts and award announcers.

While quite a number of things didn’t turn out well at the show-- the #14thHeadies edition, and several people disagree with their selected awardees which is not a new occurrence at award shows, this is however not a nitpicking exercise and we'll love to see the Headies do a better job of representing the musical talents of the country in subsequent shows.