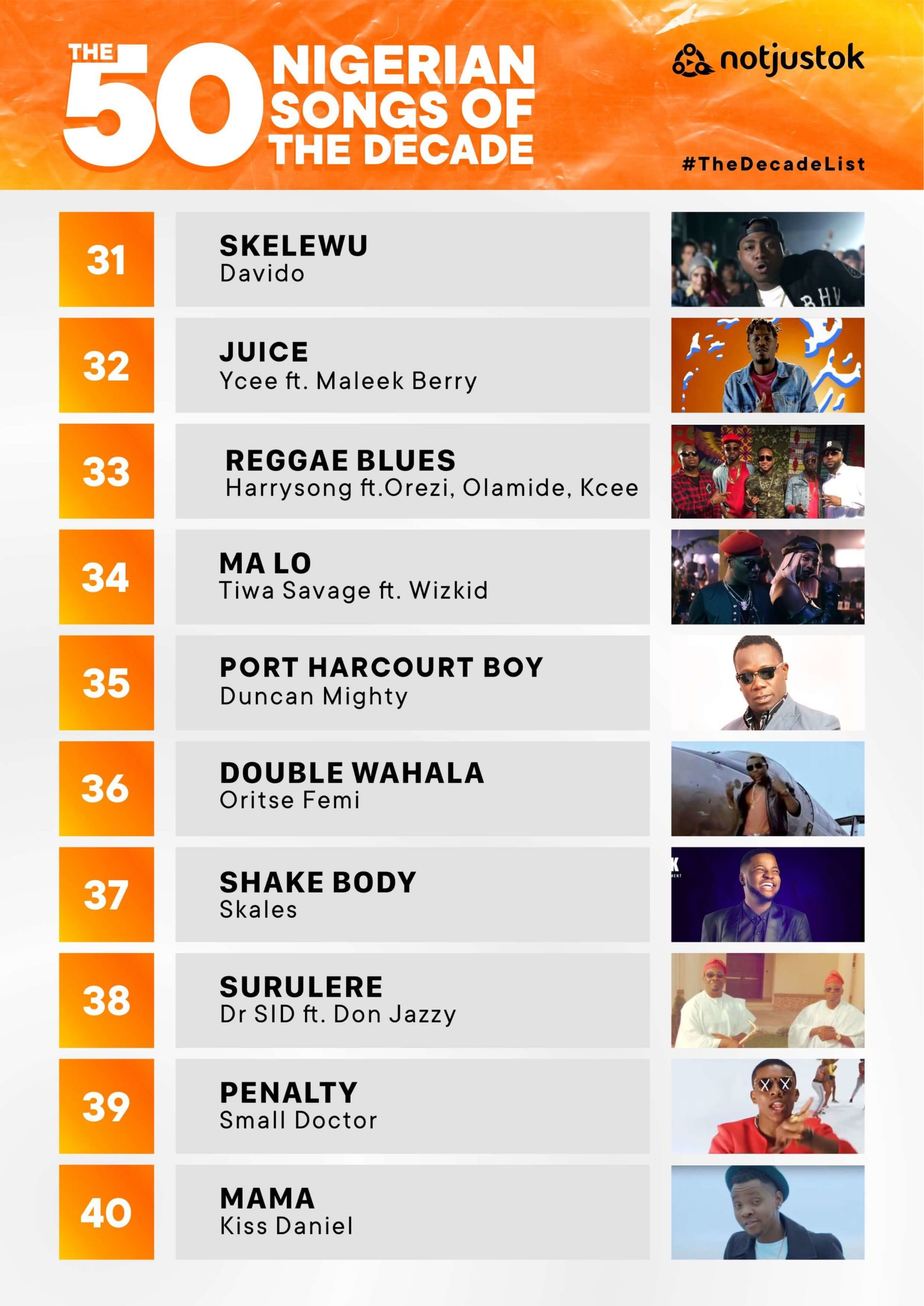 The former G Worldwide artiste staked his claim in the industry with his sugary Pop songs. Following up on "Woju" and "Laye", "Mama" was a fan favorite, and was being played in just about anywhere one could think of.

The streets massively supported this song – it was, after all, made for them. Small Doctor's upbeat song was the toast of popular culture and, more than any other song by the Street Pop act, "Penalty" introduced his unique and playful Fuji-influenced sound to the country and beyond.

So huge was this song that it bagged features/remixes from Wizkid, Phyno and, at some point, Tiwa Savage on it. So huge was it that, for a time, it was the only song which could break out from one's lips unknowingly.

Responsible for re-introducing Skales to a Pop audience, "Shake Body" proved Skales' mettle as once more, he was "Mukulu" Skales, but with less lyricism and more dance.

Dedicated to Fela Kuti, the song ran like wild fire through harmattan, bringing new devotees to the gospel of Oritse Femi. To the older fans, the song's success was only proper for such a talent.

The Niger-Delta song was Duncan Mighty's proper introduction to mainstream audiences. For close to a decade prior, he'd been wowing locals in the South East and South-South markets with his fresh sound and sharp voice which carried his often-didactic lyrics.

Tiwa and Wiz's musical chemistry should have resulted in a joint project but "Ma Lo" is enough consolation for now. The Afro Pop number features all the sultry and sassy that makes both artistes tick.

In truth, one could make a case for Tiwa having 1 or 2 more singles among the 50 Nigerian Songs of the Decade, with hits like "Eminado", "My Darlin" and "Kele Kele Love" narrowly missing out on #TheDecadeList.

This upbeat song became an anthem and it is easy to see why. With such eclectic production and wonderful verses (and that epic hook!) from top tier artistes in the Afro Pop genre, the song could've only become a hit.

"Juice" featured the sultry rapper-singer vibe that YCEE is known for. Paired with Berry's eccentric musicality, its success was only expected. "Juice" also did a lot for its creators outside the country where its sound drew comparison with that of Bryson Tiller, an artiste known to evoke the cool and sensual in his songs.

The dance-affiliated song was one of Davido's first excursions into the American market. A successful one, it would attain critical and commercial acclaim from Nigeria to LA, Johannesburg to London.