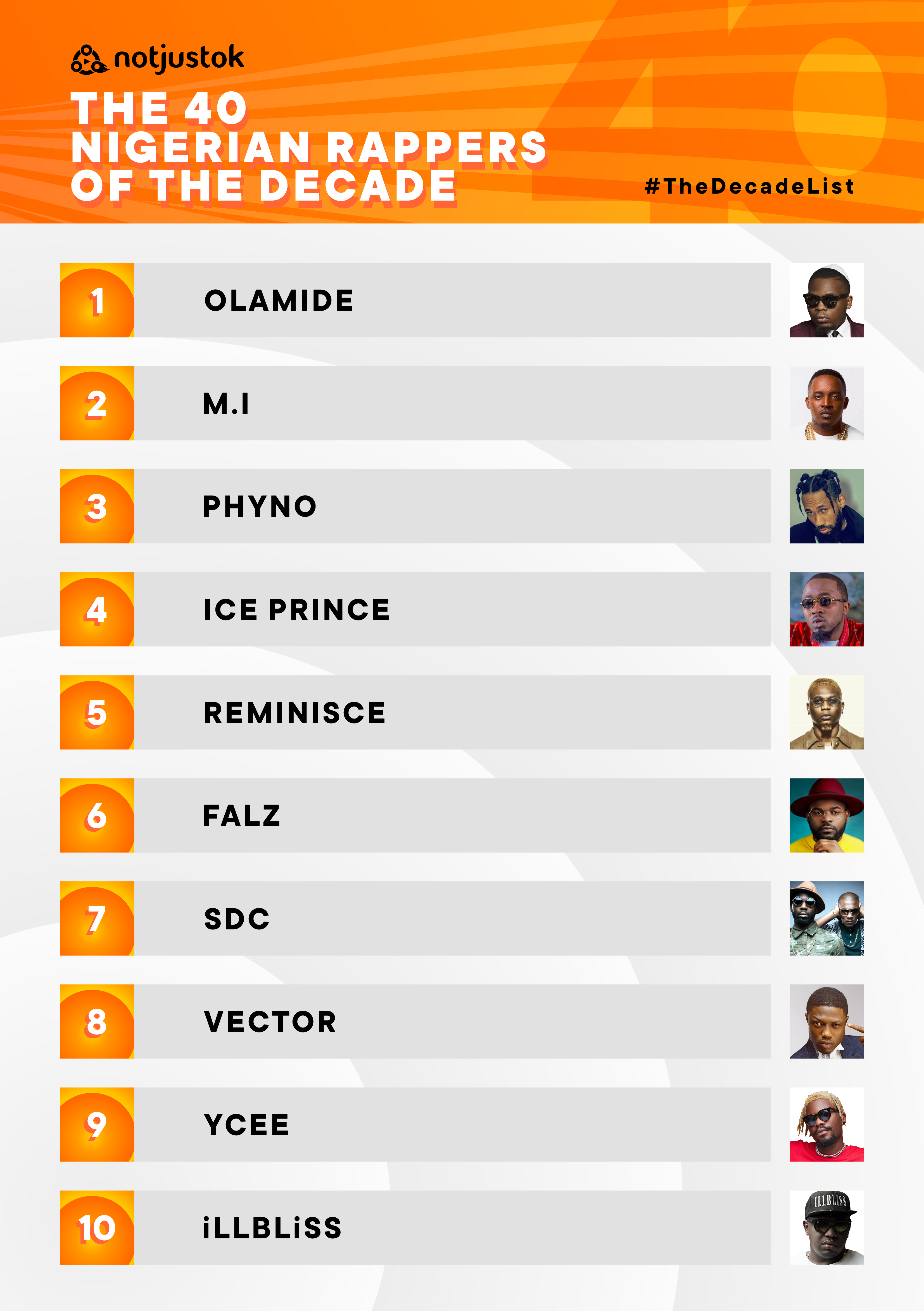 The Oga Boss has been one of the most consistent rappers in the country. Just last year, he released three bodies of work, most of them collaborations with producers.

iLLBliss is one of the few rappers who've managed to fuse commercial appeal and lyrical content. While that remains one of his strongest traits, his role in launching the careers of Chidinma and Phyno through The Gorretti Company (which he owns) also alludes to his influence as a talent spotter.

"Jagaban" was one of the hardest Hip Hop songs of the decade. With Olamide on its remix, YCEE seemed to have been blessed by the king. He could soar if he wanted.

In the decade in review, he released two EPs (with one being a joint project with Bella Alubo) and late last year (after he'd fought off Tinny Entertainment and established his imprint Ain't Nobody Badder Than [ANBT]), he released his debut, the conceptual Ycee vs Zaheer.

And people seldom acknowledge this when discussing YCEE but his reach outside the shores of the country is massive. No doubt helped by the massive "Juice" single and his Trap Hip Hop style of rapping.

From the start of the decade to its mid point, Vector was one of the hottest rappers on the continent. With his Pop affiliations, Vector gained massive follwership, featuring the likes of Samini and 2Baba at his peak period. His "King Kong" song is one of the biggest African rap songs of all time.

A major factor which places Vector's legacy in doubt is the fact that he has no unanimous classic in his discography. However, his 2018 EP Vibes Before Teslim was a solid project, one which could signal his intent in 2020, when he's expected to release what would become his fourth album.

The duo of Ghost and Tec are among the most impressive rappers on the continent — surely the greatest duo since Don Jazzy and D'banj.

They're niche rappers who know how to make good songs and an incredible album. Whether they're serenading with love-coated lines on the melodic Palmwine series or dropping hard lyrical miracles on the socio-political Clone Wars, they're incredible at it.

During the peak years of his career, Ice Prince was arguably the hottest artiste in Africa. His breakout song, "Oleku," is arguably the biggest Nigerian rap song of all time. If not numbers-wise, then surely one takes its instant impact into account.

Also take into account Ice Prince's successful projects, his reputation as one of Africa's most decorated rappers, his strong run in mid 2010s, and his spot here is justified.

With Moral Instruction winning Album of the Year at the Headies, it brought Falz's rap to the fore. His socio-political commentary was being acknowledged.

When Falz isn't making Fela-sampled truth doses, he's a turn-up king, he's "stupid and proud, tryna shoot for the clouds," as he rapped on "Chardonnay Music." He's one of the most dedicated artistes in the game, and the extensive reach of his artistry is demonstrated across his four albums.

The man born Remilekun Abdulkalid Safaru has had a fine career. His four albums (all released within the decade) are culturally relevant and important reference for indigenous rap's growth and push into Pop consciousness.

Reminisce has, throughout the decade, worn different hats: he could be a rapper's rapper on one song, flexing his trademark baritone over maximalist production, and on another song, Reminisce could be the singer. Whichever he is, he pulls it off perfectly. His fusion of styles and versatility is perhaps one of the reasons why in 2014, he was named by TIME Magazine as “one of the seven World rappers you should meet.”

Ever since "Ghost Mode," Phyno has never looked back. He's ran with his unique sound which is a fine mix of hardcore Igbo raps and melodic singing which is often celebratory. With these tools at his disposal, Phyno has created some of the biggest rap and Afro Highlife songs of the decade.

Phyno also has an impressive discography with three solo albums –his debut, No Guts No Glory is an acclaimed classic. The following year, his musical chemistry with the rapper Olamide was marked with an EP that did incredibly well.

He's been at the center of almost all the defining moments in the genre for the past decade. His influence is unquestionable, his skill level at a point very few artistes can reach. MI is the most deliberate Hip Hop artiste in history –no questions.

Most of his projects are critically acclaimed, and his bold proclamations and brilliant music ensure that he's never really been not relevant since Talk About It.

MI, with deliberate lyrical intent on his Illegal Music mixtape series and his commercially-tuned albums is the perfect embodiment of the wide market rappers are encouraged to reach.

All hail King Baddo! Ever since his 2011–released Rapsodi, the Bariga-born rapper has gone from strength to strength, reinventing himself at every turn and being the artiste most artistes wish they were.

Olamide has the street on a choke hold, his stock fattened by him staying true to himself and representing his flagrant character in his music. When these flit between genres, Olamide's writing retains the uncanny ability to be relatable to many Nigerians regardless of any social classification. Olamide embraces the visceral quality of music, the sounds of Lagos, and the musings of his heart; all his music is these in one sweet package of edgy wordplays and streetwise punchlines. His placement as an A-level hitmaker has been unrivaled (even by Pop stars) throughout the decade. Since 2012, Olamide has had (at least) two hit songs every year.

With Eyan Mayweather's release in 2015, Olamide found himself in the thicker folds of Afropop, with his often-rapped lyrics finding home in melodious Fuji-esque affairs. Lagos Nawa (2017) was the most realized project as regards Olamide's intentions. From start to finish, the streets is his primary gaze, and the music caters largely to their tastes. Since that fruitful exercise of blending indigenous elements in his raps, many have risen after Olamide, confident in the blueprint he set. Lil Kesh, Naira Marley, and Zlatan Ibile could be said to fly because Olamide  walked.

Olamide's understanding of which sound sells (and how best to sell it) has positioned him as a top talent spotter and developer. Over the years, artistes like Lil Kesh and Adekunle Gold have been signed to his Yahoo Boy No Laptop (YBNL) imprint, and were successful so as to move on, establishing themselves under their own record labels. The kid of the moment, the uber-emotional Fireboy DML, is signed to YBNL. Throughout the years, Olamide's mentorship has proven to be golden.

In a decade where he (Olamide) makes a very strong case for the Artiste of the Decade, it will be hard convincing us he isn't the rapper of the last ten years.