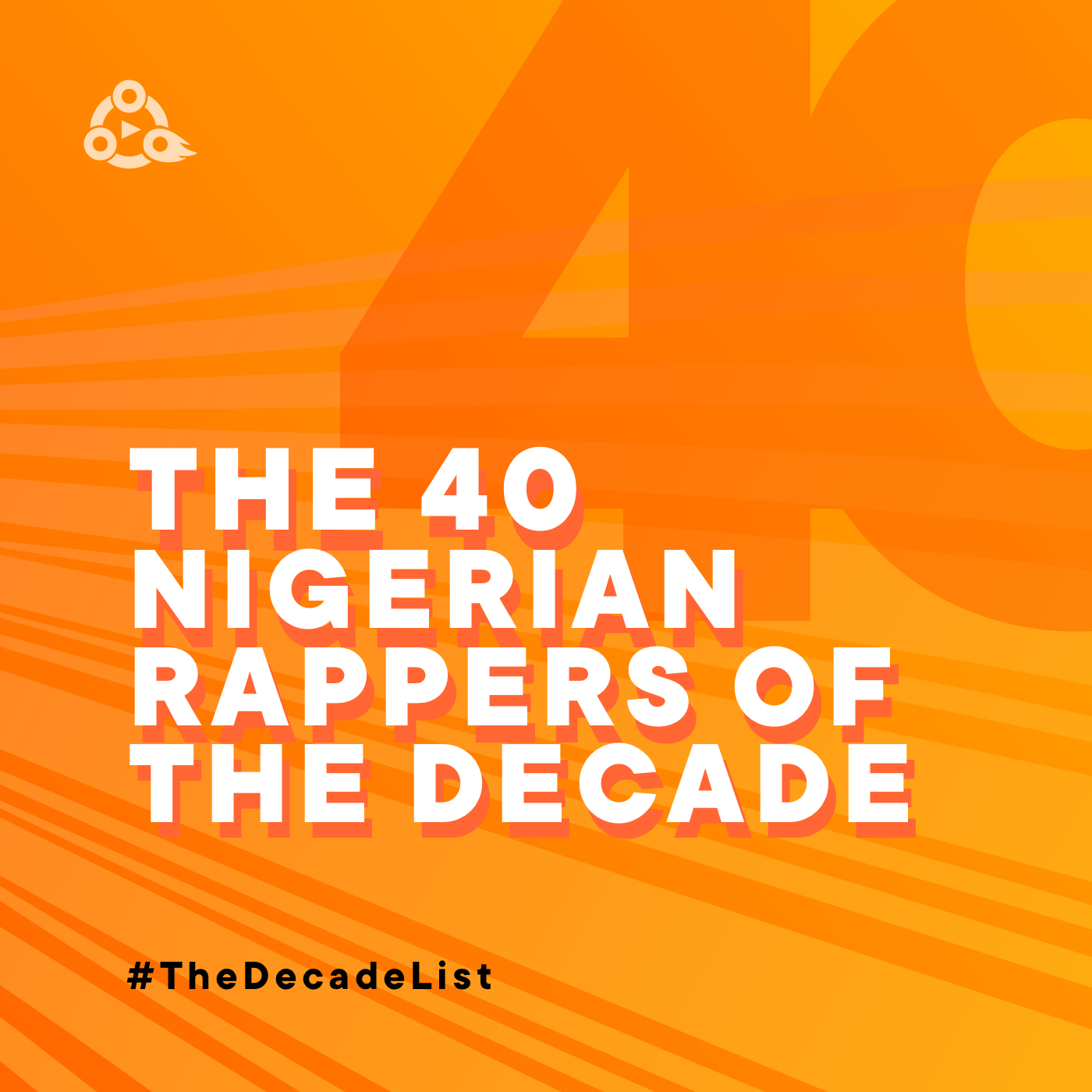 Many times in the years past, Hip Hop has been leveled as being dead. More so in Nigeria, where the Pop-inclined listener casually says “there are no rappers in Nigeria.”

Well, that’s false. Never in the history of Hip-Hop in Nigeria has there been a rapper-lyricist drought. Rather, the conversation’s been frequented with projections of what we think a dope rapper should sound like. For Hip Hop purists, the punchlines and wordplays genre needs to stay that way –others, like Reminisce, Phyno, and Olamide have disagreed, in the preference of the derogatory term (“local rappers”) used to describe rappers of their kind.

But Hip Hop is as vast it comes, and rappers, since 2010, have found a way to achieve commercial success without losing their lyrical standpoint. Even in a country where very few rappers are able to live a good life solely off the work, some have put in the work still.

Back in 2014, NotJustOk debuted its annual #TheList series, with the “Most Gifted Rappers in Nigeria” list shaking up the whole industry, sparking major conversations, debates, rap beef(s), diss tracks, and everything in between. This time around, we decided to take the whole decade into account.

#TheDecadeList recognizes the 40 Nigerian rappers who stood out across the 2010s. While some made their mark at the start of the decade, others took the game by storm towards the tail-end. And then, there are those who stayed relevant from the beginning to the end. The real OGs! But who are they? Find out below!

With these in mind, we put forward #TheDecadeList, curated by our team of music experts here at NotJustOk.com, to lend our voice, to recognize these Nigerian Hip-Hop powerhouses over the  past decade. 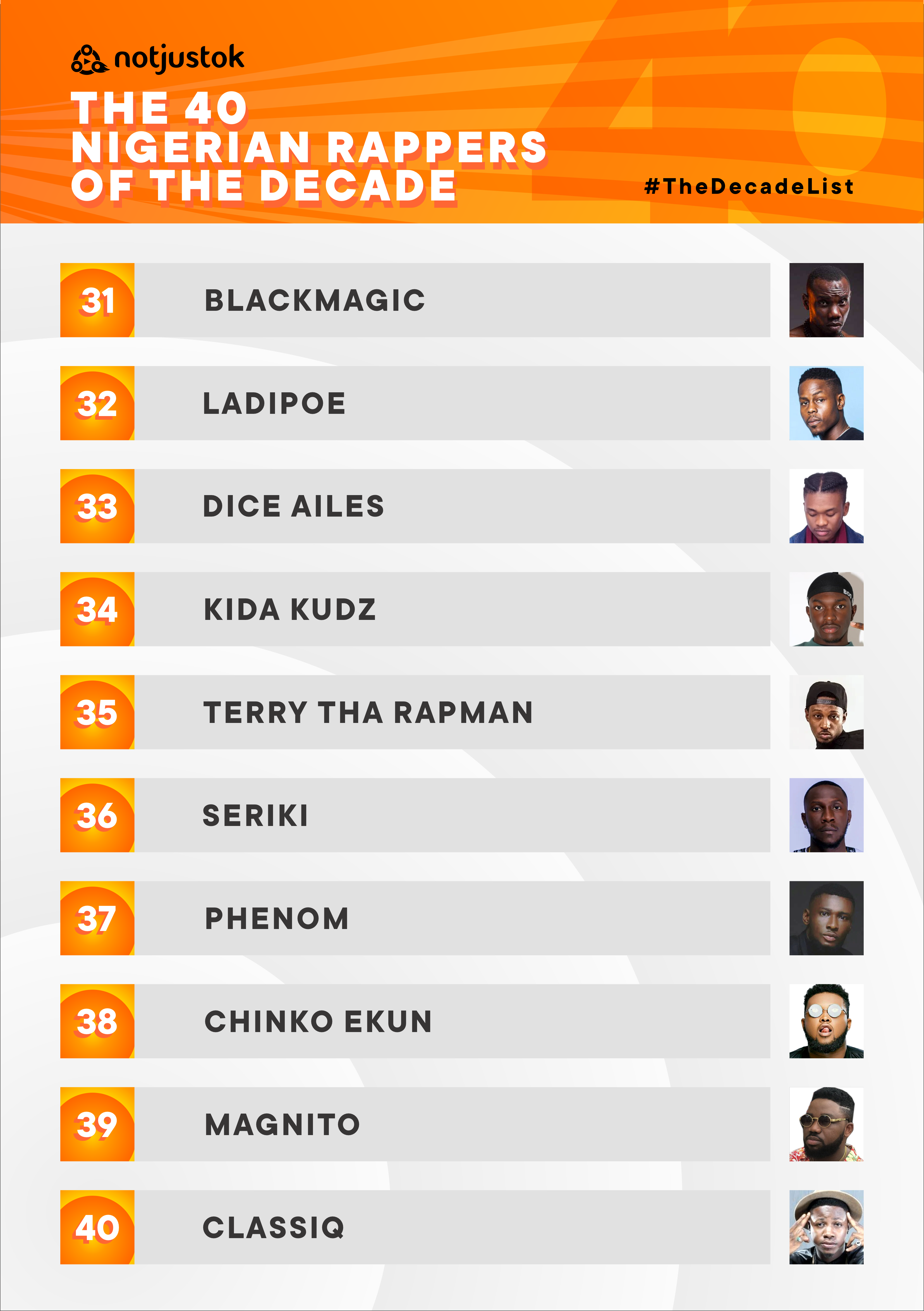 The 40 Nigerian Rappers of the Decade | #TheDecadeList

A ferocious rapper, Classiq’s blend of Hausa, English and Pidgin English has won him fans both far and wide. His September 2018–released album New North was widely acclaimed and featured the song “Gudu” which had MI Abaga on its remix.

Often considered one of the most creative artistes in Nigeria, Magnito’s charm lies in his slick storytelling which is usually spiced by comic elements. His Relationship Be Like series remains one of the longest running production of its kind, and has birthed some really special (and humorous) songs and scenes.

Although he has no body of work, and his singles are relatively received in a lukewarm fashion, Chinko Ekun became one of Nigeria’s hottest properties with “Able God.” A seismic event, that song could be mentioned as one of the first propellers of the Zanku rave –remember Zlatan on that video?

Chinko hasn’t done much, but the YBNL affiliate has never been a less-than-impressive spitter. That unquestionable talent, his street appeal, and of course, the aforementioned hit song lands him here. His Chinko’s Diary series also deserves mention.

He came into the game at a time when rappers we’re everywhere, and yet, with his candor and brash punchlines, Phenom took the game by storm. He was signed to Knighthouse Entertainment, who discovered him when he did a freestyle on an open mic session, but other label heads at the time like M.I, Wizkid, and Olamide wanted to sign him. Among his projects is the 2014–released The BRA EP, with the BRA meaning “Best Rapper Alive,” a title Phenom is known to fancy.

In the final months of the decade, he made a fine return to mainstream attention with his superb verse on Phyno’s Deal With It album, on the socio-political song “Get The Info.”

Seriki is a known spitter in the underground rap circle and has, at intervals, achieved some mainstream buzz with his singles. He has worked with a lot of respected cats in the game lik Vector, 9ice, Harrysong, and many others. In 2018, he released the album “Sakamanje” whose title track (which featured Reminisce) became a hit.

Joe Spazm might be known for youngish looks but it applies to his music too. The veteran rapper has never truly left the scene, retaining relevance and reminding us of his greatness at every opportunity. Last year, he released “Kapenta of Lagos,” a solid song which reminded us that the man who gave us the classic Boyz Are Not Smilin’ album in 2011 is still here.

His work as an artiste helper is duly noted, with the rapper Blaqbonez (among others) having credited Terry with pushing them at the earlier stages of their respective careers.

When Kudz won the second edition of the Peak Talent show in 2010, it was expected that he would have no problems breaking into the industry. He hasn’t had it easy, but with a stream of singles and EP, the artiste (born Kayode Odesanya) has managed to rep Nigeria in the UK, where he’s mostly based.

With influences from Kojo Funds and J Hus, Kudz’s music merges West African sounds with UK rap, and this has become his style, which he calls “jiggy.”

At some point, he was the shiniest artiste on the country, with his soft melodies fusing with trap Hip Hop instincts. Dice Ailes quickly moved into the game, signing a deal with Chocolate City in 2014 when he was just 17. By 2016, he had been nominated for an Headies award, in the “Rookie of the Year” category.

Dice Ailes has enjoyed mainstream buzz with his songs (he has no project yet), many of which can be described as Afropop candies. His single run started with 2014’s fantasy and last year, he had two massive songs: “Alakori,” a collaboration with Falz, and “Ginika,” a song whose cover art sparked controversy upon release.

Born Ladipo Eso, the rapper who singularly went by “Poe” has been in the game for quite some time now. With his show-stealing guest verses on Show Dem Camp’s projects, he got serious underground buzz, his fans constantly urging him to release a project.

That came in 2018, when he released Talk About Poe, his first under Mavin Records. The album received some critical acclaim, with fans and critics rating it highly amidst the projects which dropped at the time.

Ejay is a big deal. With some obscurity in the latter years of the decade, it’s easy to undermine his efforts, particularly in the genre of Alternative Hip-Hop which he birthed in Nigeria. His legend is supported by his duo of eponymously titled albums, with the third in that series scheduled for release on January 30th, 2020.