When a message popped up on my Instagram about The Lion King, I hesitated to check. The month has been extremely tough and I wondered if I was prepared to see whatever my friend sent to my dm. A list of artists on the track list for the Lion King album? I had read that Beyonce was tasked with executive producing and curating the album so I was quite fascinated. The number of Nigerian artists I saw on the list was staggering. Afrobeats don blow? 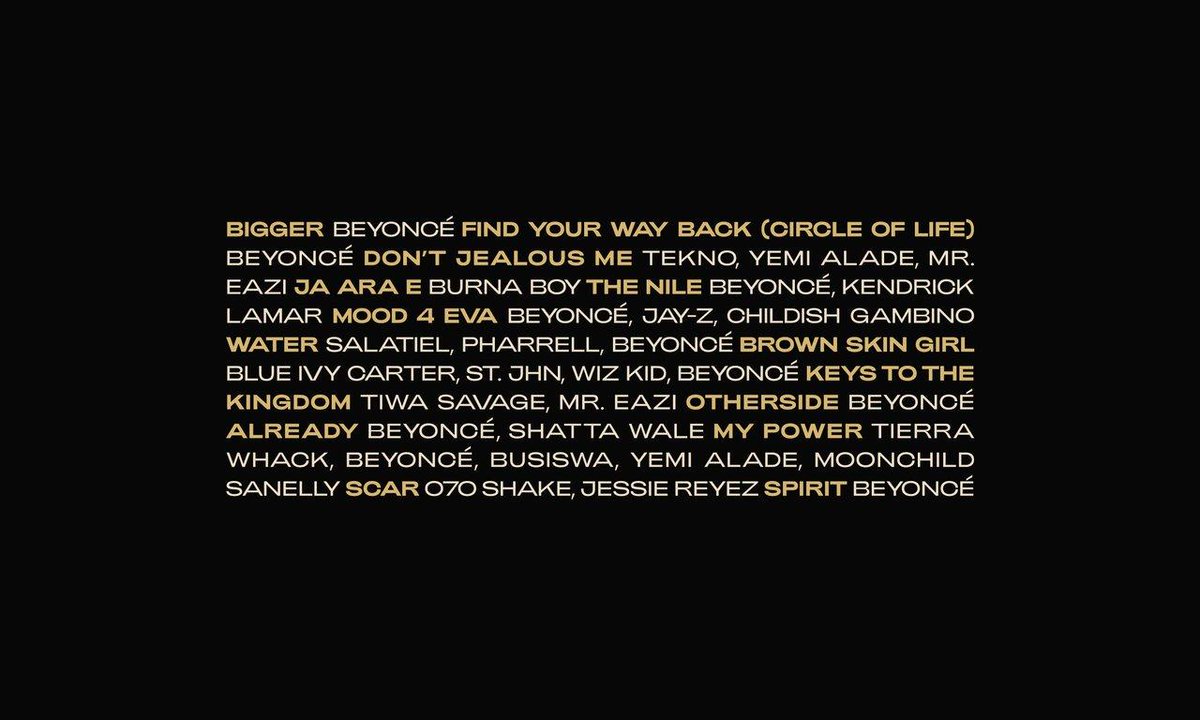 Some might say this is a major win for Afrobeats and they wouldn’t be wrong. I’m one of those Nigerians who like to carry every achievement Nigerian artists or Afrobeats make on my head. And I’m proud to say that. It might seem inconsequential but it cannot be denied that Afrobeats (and Nigerian musicians) are getting recognition in the international scene. I wouldn’t dismiss that. Nigerian acts featuring on the soundtrack of a movie is not something that happens regularly. Featuring on the Lion King album? That's major.

Firstly, the sentiment that many of us hold for Lion King movie is enough to make us gingered. If you never watched Lion King as a child, chances are that you were adopted and most likely picked at random in a room full of kids. It’s those kind of memories that we regard special and the fact that our very own Naija acts will be on the soundtrack of the movie is incredibly exciting, if not mind-blowing. Imagine hearing a Burna or Wizzy while being thrilled by one of the favorite movies from your childhood. I bet that’s more fulfilling than eating the bottom part of party Jollof rice.

Collaborating With Beyonce And Other Eminent International Artists

Secondly (and can I say most importantly?), Nigerian artists will be working on the same project as Beyonce. Oh, I know what you’re thinking. Is Beyonce God? Well, in the world of music, she, undoubtedly, is a deity. She is very influential and I believe that getting a nod from Beyonce is a win for Afrobeats. Asides Beyonce, there’s a chance that Naija acts will get to work together with other prominent acts including Jay Z, Pharrell, Childish Gambino, Kendrick Lamar, and many more. There will be conversations and relationships will be established. Maybe a Wizkid and Jay Z collab is in the works? Tiwa Savage delivering a powerful Afro-vibe hook to Kendrick Lamar's rap? If you take time to think about it, it’s worth being hyped about.

In Beyonce's words; "The soundtrack is a love letter to Africa. I wanted to make sure we found the best talent from Africa. Not just use some of the sounds and do my interpretation of it. I wanted it to be authentic about what is beautiful about the music in Africa."

[It features] a beautiful, multi-genre symphony, steeped in African influences from various corners of the Continent, with unexpected collaborations, pulsating rhythms and crisp production that celebrate the African diaspora. This love letter to Africa highlights the setting of the film, rooted in African culture and wondrous narratives"

An Important Platform For Afrobeats

Honestly, this is the kind of recognition that our Naija musicians need. It’s equally important for Afrobeats as a genre and the acts whose names make the project. Operating at such a level also comes with a different kind of exposure for the genre. Composing soundtrack for a movie is not a thing that many Nigerian artists can boast of. It's a commendable thing to put on your resume as a musician. It’s the start of something novel, a great start. It’s a viable means for Afrobeats to penetrate further into the international market.

The Stupefying Number Of Nigerian Artists On The Album

The Nigerian artists on the list include Wizkid, Burna Boy, Tiwa Savage, Yemi Alade, Tekno, Mr. Eazi. The album, which contains 14 tracks, is set to be released on Friday, July 19, 2019.

Some people have taken to their social media to troll Davido for not being on the Lion King album. I know it's 'bants' but permit me to say that Nigerians derive joy in focusing on the unimportant aspect of things.