List Of The Best Albums And EPs Released In April 2021 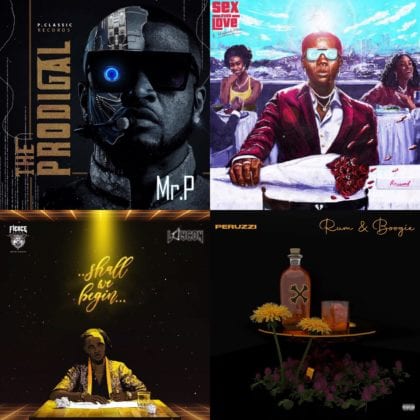 A collage of some of the best albums released in April 2021 by Nigerian musicians.

The month of April marks the beginning of the second quarter of 2021 and it's been a year filled with lots of activities, new releases, dramas, and controversies (whose name popped up in your mind?) in the Nigerian music scene. Yes, there were lots of drama, premium dragging by rival fans but despite all these, our Nigerian music stars delivered amazing albums and EPs in April 2021. Below is a compiled list of the best projects released in April 2021;

The highly anticipated ‘The Prodigal’ album by Mr P was officially released on the 2nd of April 2021 and for me, it wasn't just a debut album by the artiste but a major statement to his doubters. 17 tracks were on offer on the project and each track proved that Mr P possessed the vocal power to succeed as a solo artiste despite the general belief that he only delivers with his dance moves.

Over the years, Peruzzi has established himself both as a songwriter and top vocalist. ‘Rum & Boogie’ displayed the versatility of the DMW act. 20 songs divided into two parts consisting of 10 tracks that splits the singer into two personas. The Rum part of Peruzzi is primarily the lover boy, while the Boogie side of the vocalist is more of vibes. The album was released on 9 April 2021.

Laycon - Shall We Begin

Laycon delivers his debut album dubbed ‘Shall We Begin’. A project that conspicuously shows the lyrical strength and versatility of the BBNaija 2020 winner. From the sexually charged ‘Bam Bam’, to the soothing rap vibes of the Terri-assisted ‘Jeje’  , and the self-glorification infused in ‘Verified’ featuring Mayorkun, ‘Shall We Begin’ was the perfect project to announce Laycon to the Nigerian music scene. The album was released on 30 April 2021.

Chocolate city rapper, Blaqbonez finally released the highly anticipated ‘Sex Over Love’ album after much buzz and hype surrounding the project. With this album, Blaqbonez has positioned himself as the ‘poster boy’ for Hip Hop in the Nigerian music industry. The album was released on 30 April 2021.

Runtown’s fourth studio album, ‘Sound God Fest Reloaded’ confirmed his OG status in the game. A compilation of 12 tracks offering the best of Afrobeats laced with Afro-Caribbean vibes. The smooth delivery of English and patois is something to behold and Runtown truly showed that he isn't anything short than a ‘sound god’. The album was released on 23 April 2021.

Waje serves us this 5 track project in the form of an EP. Waje didn't fall short of what we expected from her on this EP, the usual top vocal delivery by the songstress was on display on every song in the project. The EP was released on 16 April 2021.

King Perryy - Citizen Of The World

Normally, we tend to box artistes to specific genres of music and that's fine and ok, wait did you just say that's fine? After listening to King Perryy’s debut album, ‘Citizen of The World’, your views on boxing recording artistes to a particular genre of music will change. The singer serves us an album which defies the logic of categorizing every studio project by an African artist as ‘Afrobeats’ . The album was released on 28 April 2021.