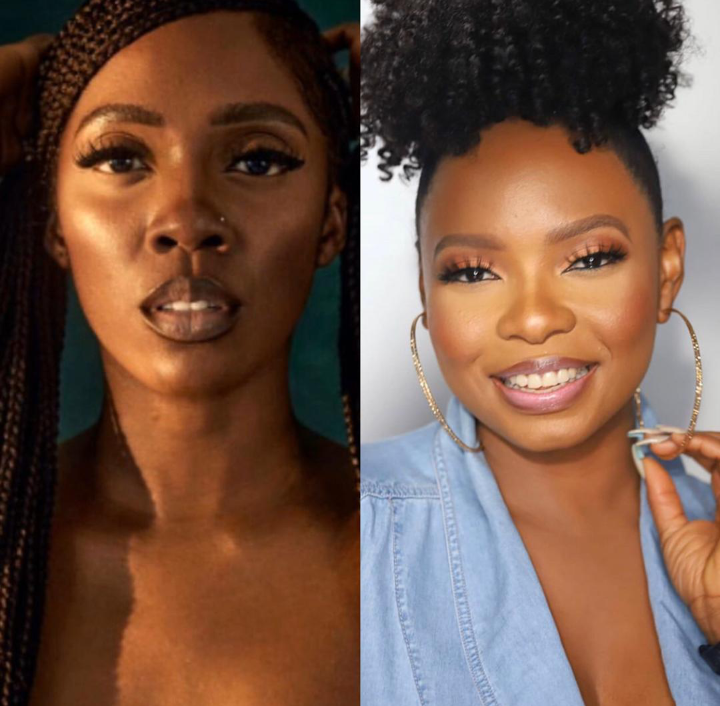 We Need an Instagram Live Battles Ladies Edition - Tiwa Savage Vs Yemi Alade, Asa Vs Simi, and others

Live battles on Instagram have become a coping technique for the COVID-19 pandemic which has rocked the world, although we haven't seen Ladies IG Live Battles. By now your favorite artist has probably been in one, either corporate-facilitated or by themselves. What follows is a semi-formal show, playing songs, sharing stories, and interacting.

We love it: from Sarz and Shizzi exchanging light banter over the songs they've produced to Ladipoe and Vector having a stirring conversation on Hip Hop, practitioners in the entertainment industry –mostly artists and producers– have taken to these events like a duck to water, the most recent clash being between rap behemoths Naeto C and M.I Abaga, who set the pace for Nigerian Hip Hop in the late 2000s, and into the new decade.

It's a thing of legacy. A look at the faces of any artist or producer while these events hold and there's always that smile, the one that says I'm actually enjoying this. Artists are however wary of engaging in these events, primarily because of the destructive brand of competition upheld by the fans. When a friendly spar turns to a fight that draws blood, you want to turn away from the sword in front of you.

It's the reason Davido and Wizkid will never get on the IG Live train, talk more of a song together.

The Place of Female Artists

The Nigerian music industry is a strange place to be a woman. While American artists Megan Thee Stallion and Beyoncé enjoy number one spot on Billboard, a similarly-achieved feat in Nigeria can set off a chain of reactions.

Some of these are better dubbed as a path to the conversation, especially this Native Mag feature on Simi. The writer's concern, as expressed in the title, 'On Simi’s “Duduke” Being The Most Played Song In The Country & Not Having A Moment,' is one I've thought about often. How female artists barely get to the top of the food chain. How, when they do, they barely affect powerful discourse –powerful being women's empowerment and the relative subjects.

It's an interesting topic to explore in the essay. But it's an unfair topic because it would mean asking the musician to step into a role other than creating music. (Fortunately) many would, but few wouldn't. And the hurt of the writer is these few are also the top placed females, occupying great spots on charts, having the discography and success to match and triumph against most. Simi is just one artist; Asa, Tiwa Savage and Yemi Alade complete the quartet of the most visible female Nigerian artists working today.

Set up in the way it has, there's little question that the music industry is male-dominated, and in more ways than one. There's the invisible hand working against the dominance of more than one female act. There's the representation of women as sexual fantasies in videos. They're the fans, who furthers the invisible hand by striking up comparisons at every turn, instigating hate, however silent it is. There's the sexist talk peddled by some: that female artists are less likely to cooperate than their male counterparts.

These are conversations we should cultivate. But more than conversations, what we need right now is for women artists to step into their greatness. To be classy, bougie, ratchet and savage with it.

As a personal preference and the Ladies IG Live Battles goes, Simi and Asa would a great fit, and for obvious reasons. The music and themes of both artists tilt towards expressionism. For a "Complete Me," there's a "Be My Man." Depending on who you ask, Simi and Asa share more than twenty hits between themselves, and that equates to more than two hours worth of genuine conversation about their music, their creative process, how uniquely they accessed acclaim. Women creatives in the same field should have so much to talk about.

Asa and Simi version of the Ladies IG Live Battles will surely be a boogie down, but Tiwa Savage vs Yemi Alade will be 'Fantabulous'. These two are often pitted against each other, even though their qualities vary in scope. The marked difference in their music is Tiwa Savage's preference for the cheerier terrains of Afro Pop music, and her songwriting tendencies differ from the other person. Building her discography on the influence of more traditional African sounds (with heavy reliance on drums, chants, and dancing), Yemi Alade is more of Angeliqué Kidjo than Mariah Carey. Tiwa, with early orientation on Western music, could be said to mirror the latter.

Between themselves, Yemi Alade and Tiwa Savage have more than twenty years as top tier entertainers racking premium numbers: At shows, on streaming platforms, YouTube, on social media. They're two queens thriving at what they do, and people need to understand that's possible, hence a friendly match-up between themselves should prove humongous.

Everything Savage, the Tiwa Savage concert which held on December 24th, 2019, featured a glorious stage moment. Clad in a black dress, Yemi Alade joined her colleague, much to the excitement of all at the sold-out venue. “I am very happy to announce my dear sister (Yemi Alade) coming on stage. From this very moment, I don’t give a hoot about what you hear on Twitter or Instagram. If it’s not about my love for my sister, do not believe it,” Tiwa Savage said, a powerful statement, considering they'd been fan-inciting rumors of "a supremacy rift" between them.

Six months later, that experience can't be replicated; not now. We can't shuffle our bodies into Eko Hotels. But here's what we can do: Turn up in the numbers for a versus between two of our foremost female artists.

It could take international precedence: On May 9th, iconic American musicians Jill Scott and Erykah Badu participated in a Verzuz, the clashes created by revered producers Swizz Beatz and Timbaland to celebrate great black artists. In a story detailing how the night "felt more intimate than a live show," Doyin Oyeniyi wrote of both women's impact, and how graceful the night (which had 700,000 viewers) had been. It was reported that the participators' streams went up by 300 percent. Which is to say asides its obvious cultural currency, they're also commercial prospects.

Tiwa Savage and Yemi Alade boasts similar placement in contemporary Nigerian music and were they to hold theirs, will parlay traction. Asides the perks I've cited (owning their greatness, spike in streaming numbers, social media buzz, etc.), speaking on the ideas and stories behind their music and career moves will be a good way to give the game to the many female artists they inspire.

All I'm saying is

(An African proverb) The tale of the hunt, unless lions learn to document their stories, will always glorify the hunter. We say enough to the hunters, and yes to women artists relating their stories and tested strategies, not being humble about their skill level and achievements. The prominence, relevance, and timeliness of these IG clashes present just the perfect platform, and it will be a disservice if they don’t engage it. So, again,  We need Ladies IG Live Battles, whether Asa vs Simi or a Tiwa Savage Vs Yemi Alade, we want a show