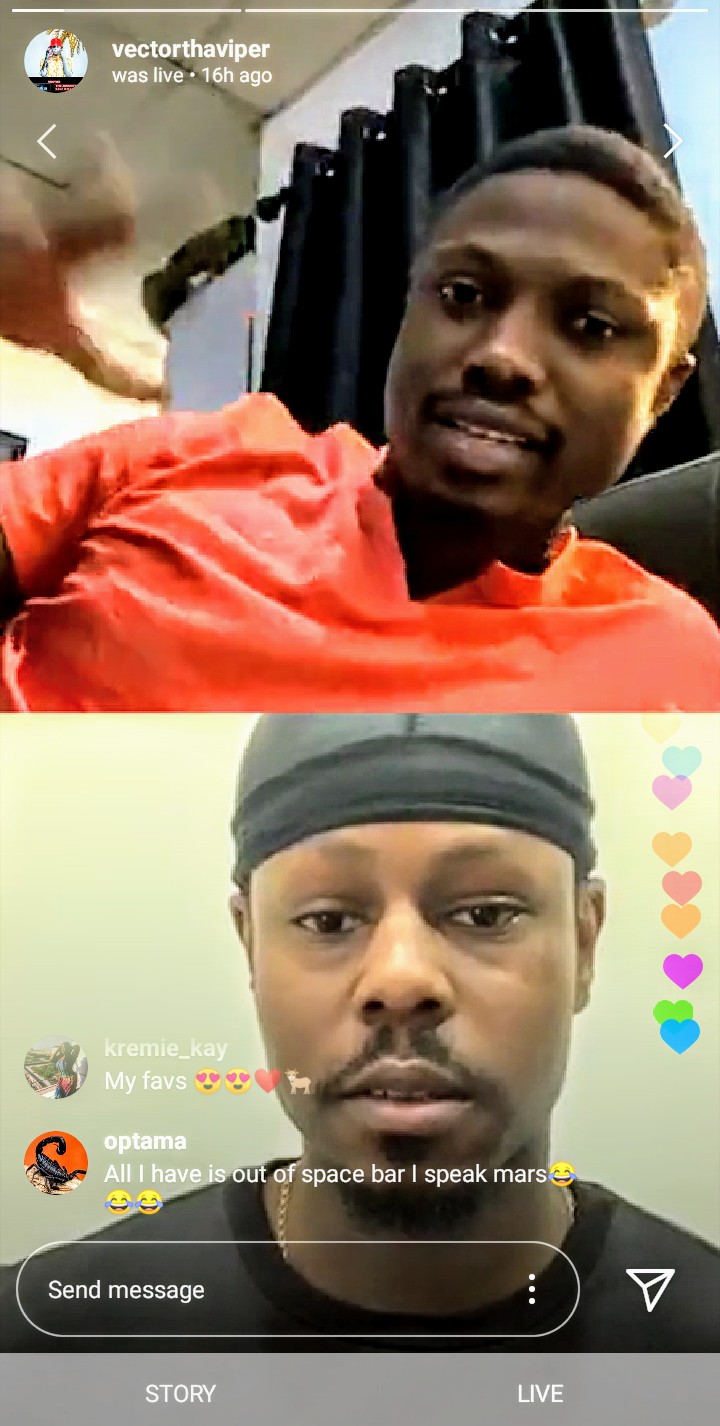 Ladipoe and Vector have been frolicking lately. From teasing a song, to actually confirming they've worked on something, both rappers has had us anticipating something great for a minute now.

It started on Saturday (April 18th), when Ladipoe tweeted "I want to do a breakdown of my verses. Too many lifelines not too share." Some hours later, he would mention Vector and ask him if he was down for a "back to back" on verses.

More than just agreeing to it, Vector came up with a dope title for the event, hashtag Mind to Mind. Ladipoe expressed excitement about that, and VEC did too, saying, "This should be interesting". Quickly enough, a flyer circulated around and we were up on IG Live, 9PM (Nigerian time) on Sunday (April 19th).

While fans waited for Ladipoe to join in on the IG Live, Vector played "Oja", a song off his latest tape, the acclaimed Vibes Before Teslim. A fan favorite, the song sure kept the people piqued, as they expressed excitement with flying flames and emojis in the comments. It was a great mood set already and Vector, sporting an orange shirt and an uncut hair, looked a sibling who was so excited to see the extended fam. Smiles and all.

Ladipoe joined. More smiles. You could see the respect in the eyes of both rappers as they took us through the mission of what they were doing. "This rap thing, e goes deep; they're some things they not catching", Poe would say, expressing the need for breakdowns like these. Before they began playing songs, Ladipoe, ever thoughtful and gentlemanly, would issue a disclaimer (sort of), of both rappers being at home (in case of unsatisfactory sound quality), of the power situation, and most importantly, of the network palaver that has plagued many IG Lives of this kind.

Vector played the first verse, off "Stay Scheming (Freestyle)" a song on his 2012 mixtape Bar-racks. Poe went on to play "New Era", one of his first official releases, and produced by the masked genius, Charlie X, who he shouts out. "For me, it was like introducing myself at the time, cos not many people knew who Poe was," the rapper explained, going on to state his love for punchlines, but then, there's always an underlying message or story, hence his preferred "lifelines".

Talking about his penchant for storytelling, Ladipoe still touches on the importance of relativity, through witty lines and popular culture references. He references a middle finger line of his, a double entendre which suggests a sexual act and also a f**k you to haters. Vector further drives the idea, mentioning his own line, "If I ever sucked, my shawty's legs would be wide open", then going on to reiterate the need for such bars. 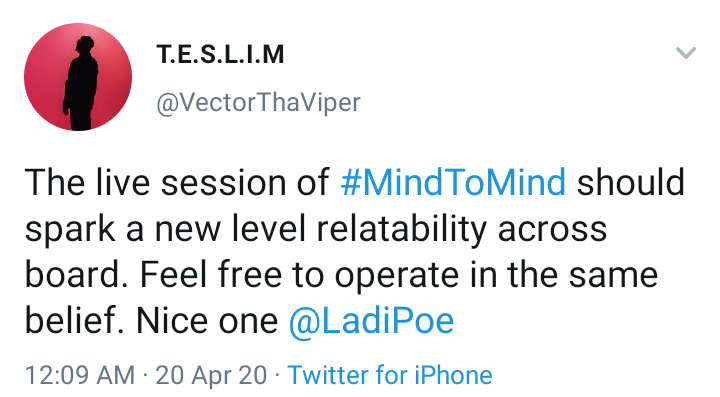 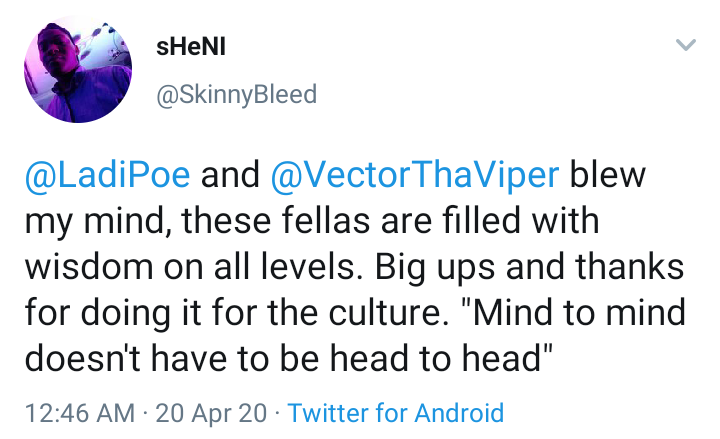 What makes this Ladipoe and Vector Mind to Mind event a dope one is its lessons. Two rappers, with almost two decades in the rap business. With similar styles, they know what they're saying when they allude to being a rapper trying to make relatable content. Whenever they play a song, its breakdown is inundated by mini lectures on rapping, as both rappers speak on their philosophies as it relates the art form. And you see the admiration in each rapper's eyes when the other's verse is on, head bumps and ohhs.

"It was poking fun at something I don't really see as a bad thing", Ladipoe said of his "rappers dying off from afrobeats fever", line in "Revival", the last song of his debut album Talk About Poe. Going on to explain his point, he says he believes afrobeats will take Nigerian music to the next level, and there was always going to be a difference between his style of rap and a Wale Turner (who streamed in). He went on to explain that it's not really Hip Hop anymore – as in strictly abiding by its tenets and classic sound. But rap. "We're rapping", he says.

"I've been browsing a new consciousness about rap", Vector speaks. He went on to allude to his barrack boy episodes, how back then, they would banter each other. But their bants, too, relied on punchlines and wordplays. For entertainment, and for more points. He also referenced an art form, Ewi. Rhythmically and Applied Poetry, the full meaning of rap, was painted in an illuminating way by Vector, who took the word 'rhythm' as native sounds, peculiar to one's place of origin. Therefore, it's an obligation even, to rep the rhythm of one's roots when rapping. And no one should be made to feel inferior about his style of rapping, Vector posited.

Throughout the verses breakdown which doubled as a conversation, there was a strong audience of close to two thousand. Among the celebrities who tuned in were our own Ovie (who Vector spoke of his support towards artists), Nigerian-born American journalist Ivie Ani, Ehiz of MTV Base, Show Dem Camp (longtime collaborators of Ladipoe), and a host of others. 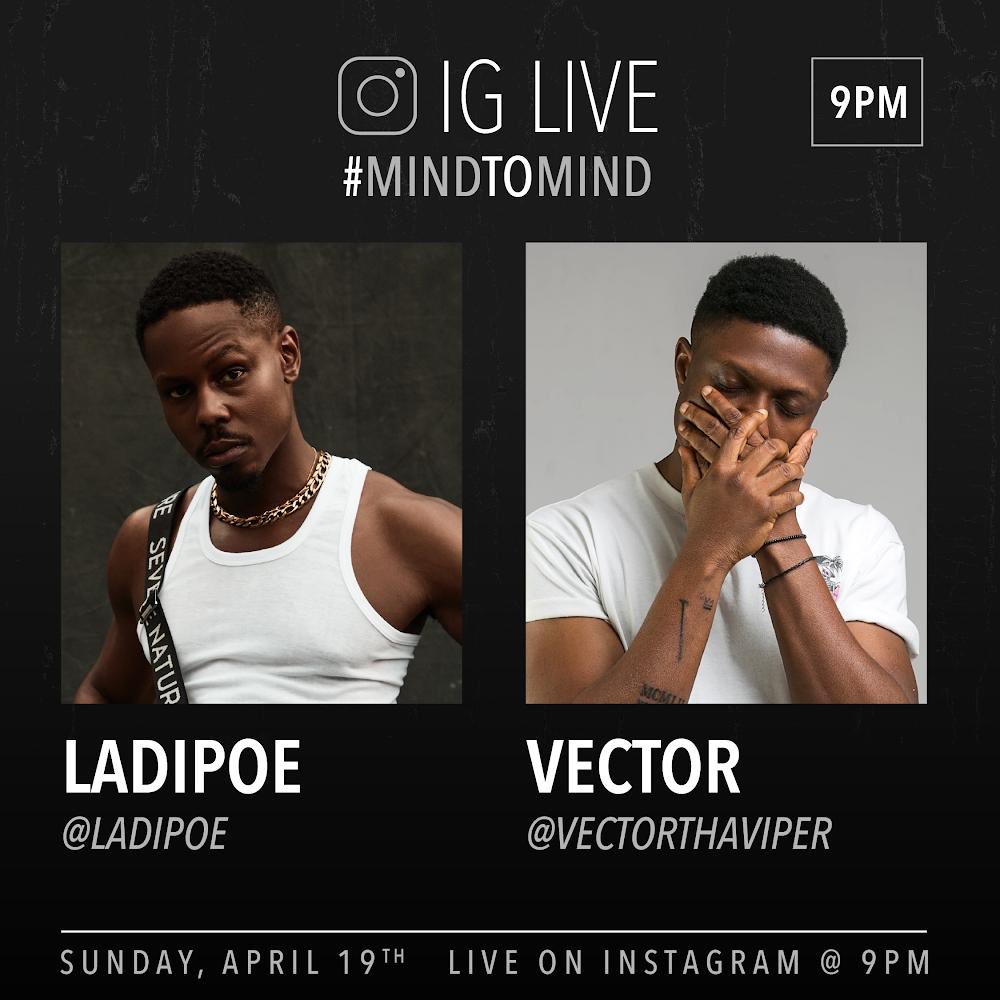 All in all, it was a dope show, a great atmosphere held by mutual respect and knowledge of the craft. As everyone who loves rap continue to make sure it rises to prominence in Nigeria again, Ladipoe and Vector's moment last night was a great effort towards enlightening the masses and shedding some of the mystique behind rappers and their works.

It was a dope session.. blessings to both rappers