In this edition of Fan Affairs, we speak to the Away star with the enchanting falsetto, Oxlade who recently put out his second project, the Eclipse EP, to get the scoop on all the fan love he's been getting since his voice broke him through. 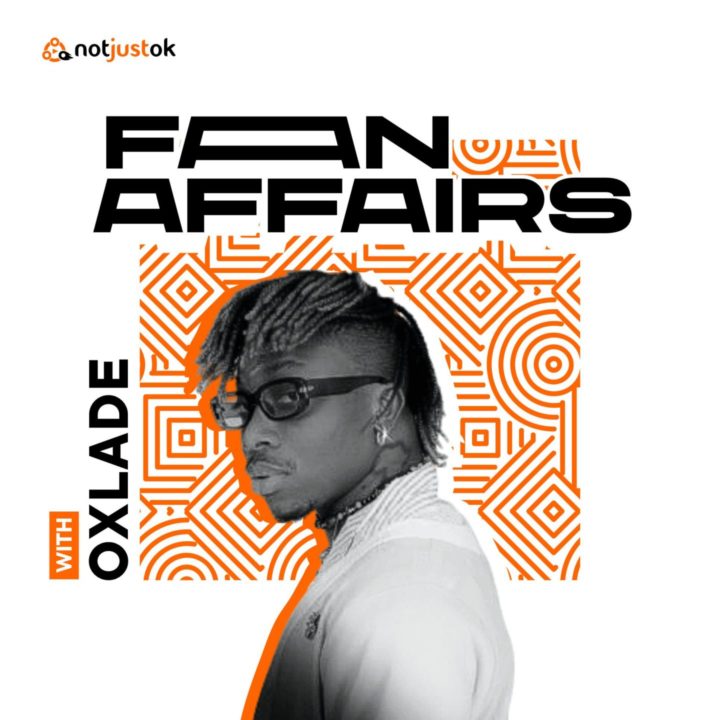 Fan Affairs with Oxlade: When did it first hit you that you had fans?

This was a weird experience but one time, the Nigerian police carried me under the bridge of Ojuelegba like they literally stopped me, took me out of my ride, and carried me into their van. I've never shared this story before cause it would make me seem insensitive but inside the bus they took me to, the police that was driving was jamming to Away and they didn't know that I was the one they were harassing. And I had mixed feelings like ‘Damn, I've blown’ but again, they didn't know who they were rough handling. But outside the streets, as they were taking me in, everybody was shouting ‘Oxlade, Oxlade, Oxlade!’ It was past the center of my hood itself, Ojuelegba in Surulere. It was a bittersweet feeling but I couldn't pay attention to the fact that the police were actually jamming to my song on the radio. It was weird.

Did they ever get to find out and how did you get out of that situation?

ALSO READ: Fan Affairs with Lojay: 'I want to Go on A Tour Round Nigeria"

Back then I'd never performed Away, Covid was just starting to ease out and everybody was just starting to go out. So getting to see everybody recognise me, not from the perspective that I could have done something bad but instead, regardless of the fact that the police were rough handing me, they were happy to see me outside and they recognised me and getting into the car, it's still my song they're using to enjoy while beating me.

Was this arrest during the #EndSARs period?

It was before the #EndSARs, this was one of the various events that triggered us to stand up and go for the #EndSARs.

I missed street fried yam with ponmo, in Surulere I could casually trek outside and go and buy fried yam. Everything here is classy and packaged. I can't even go out. There are some things I can't wear-- some rumo rumo outfits that I can't just get away with because I'm an artiste. There are some places where I have to get into character. But trying to switch from Oxlade to Olaitan can be stressful. I wish I could still play football in the streets. I miss street soccer-- I'm a street boy so pardon me.

But I still go to the streets. I shot Frenemies in Shitta and I go back home to connect with my people, at least one weekend in a month if I'm in the country.

Would you say you ever feel overwhelmed by being an artiste and the fan love?

Now I just allow everything that happens to flow naturally so when they come gassing me up, I just show equal appreciation to the ones that I can thank. But there are some people that go beyond the line and do some extra things, those are the ones that give me goosebumps. So I always wear shades because I'm a shy guy by default and that hides my facial expression. Most times people go over the line on these Ps, I get goosebumps.

So of all these times, what's the craziest or most memorable thing a fan has ever done to get your attention?

A fan inked my name on her waist. It happened last year during Covid.

How did you find out?

Till now I don't know how to feel about it but that goes to show how diehard it is to receive that much pain. And it's on the waistline so it's not everyone that'll see it so it feels less pressuring on my side. But her boyfriend is also always going to see it and that's the weird part.

I sent her a message, all those newsletter things saying thank you for supporting my music and then I gifted her a free ticket to one of my shows.

Wande Coal, any day of my life. Or Chris Brown but he won't really leave me starstruck but I'll feel it. But for Wande, I'll not blink for the first one minute. And we've met but it can never go.

You've always had a core following, what would you attribute this to?

I really have no idea but I think my genuineness and my transparency in my circle actually helped a lot. I try my best to interact with my fans. And all these little things matter. So once in a while, try to check your tweets and your DMs. They would understand that you can't reply everyone but when they see these little kind gestures, you know how they send these long-ass messages without expecting a reply and just go in and tell them you're a star, you can do it, don't give up. If that's the one thing you can ever send to them, you have no idea how many lives you're touching and it will have an effect on the person's friends too.

ALSO READ: Fan Affairs with Olakira: 'A Politician's Wife Moved to Me in the Club'

So if I feel like celebrities should try once in a while to retweet something or just show appreciation cause these are the people enriching us. So we need to actually care more about fans and I think that's why my own people they don't want to hear any story, if you come at me on Twitter, they'll come for you and your family.

You've also always had closet performances when did you start having these shows and of all of them, which would you say is your favourite?

That'll be Plug the Ox in 2019 December. That's the only time where I could connect with my fans at the fullest capacity before Covid so it was quite spiritual and personal and it was like “Damn I actually have fans that came only for Oxlade’s music. Now I can't wait to do that again cause this other time it's going to be bigger. Now I'm not even capping myself again cause the last time, I felt like ‘Lemme just have 200 people and do a meet and greet. Plug the Ox had 15, 000 entries and 2,000 people in a 200 capacity space which was a madness so ever since then, I don't undermine myself and how many people I can perform for.

If you enjoyed Fan Affairs with Oxlade, make sure to check Notjustok.com every Tuesday, as we'll be sure to bring you more authentic stories from all your favorite music stars. You can also stream Oxlade and DJ Coublon's Eclipse here.