#GidiFest2018: Was This Year's Show A Great Compensation For Last Year? 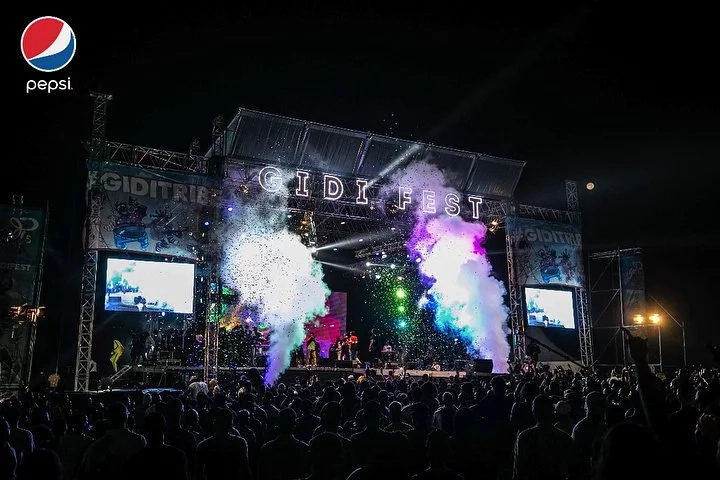 The 2018 edition of Africa's biggest music festival, Gidifest finally came through on the 30th of March at the beach behind Hardrock Cafe which is a change of venue compared to the past three years which was held at the Eko Atlantic. Considering the organizers of the festival, Eclipse Live and Pepsi have been using Hardrock Cafe for some of their shows in 2017 like Maleekberry and Simi debut headline shows, No Shakin' Carry go and some more, the change of venue was not much of a surprise, As popular as Hardrock Cafe is, these shows have helped create buzz around the place from last year till date.

Was #GidiFest2018  a successful one? Let's start with the activities...

This year's GidiFest was full of fun activities and while people waited for the show to start, they played different interesting games such as Volleyball, football and ping pong. Body painters were available to decorate different body parts and video games were made available for people to get busy with. For the photo lovers, great photo spots and themed areas were made for them to design their social space with.

A lot of thoughts seem to have gone into these activities before the show like they usually do with different kind of food and snacks readily available for your consumption. I'm sure the vendors made a good profit as one was seen at the end of the show singing a money-themed song... how rich Gidifest hath made thou.

To some people, part of the expectation was that since Pepsi is on board as a sponsor of the event, things would not just look up for the organizers, but also for the fans especially a guy who said he's looking forward to the free unlimited Pepsi he'll be feeding his system. Well, that expectation didn't go well because apparently, the price of the drink was placed at 2 bottles for 500 Naira which doesn't make any sense as a bottle of Pepsi goes for 100 Naira. Before you raise your brows, a lady made a valid point, stating that it is possible the intended crowd GidiFest was looking forward to pulling this year is one that won't blink twice if Pepsi was sold for that amount. Well, I think some people went out to get themselves drinks... they cannot come and die.

Another thing that didn't sit well is the car parking plan. Compared to the former venue, Eko Atlantic, that was not a problem because their car park is big enough to contain as much as it did last year and probably even; a parking lot and that was also means of avenue for some people who charged 1000 per vehicle. That wasn't much of a con until we were informed that we have to pay 500 Naira to transport us back to the venue of the event. 500 naira from one gate to the next! So if you're taking a tricycle popularly known as Keke Marwa, the distance would be about 50 Naira and even the Keke Marwa driver would be really thankful if you give him that amount. It was quite a short distance and if you're familiar with Hardrock, you'll know the first and second gate isn't that much of a distance so asking for 500 per person after collecting one thousand Naira for parking space was not a good way to treat fans that have been with you under the rain and in the sun (Sounds like Nigerian corp members). But then again, back to the target audience, they are probably people that are not supposed to complain about 500 AC bus to transport them down to the venue... so case closed!

Gidifest this year provided two stages; one for the NextGen and the other for this generation. This was a great idea because it gives these NextGen artistes their own space, fans, crowd and the opportunity for people to see them without the distraction of a big star. So any fans standing in front of the NextGen stage was there to see the NextGen artistes perform an enjoy the good music they create. It was great to see the guests vibe to artistes like Odunsi The Engine, Lady Donli, Teri Apala, D'Truce and more and speaking to some of these artistes, they revealed this is their biggest stage to perform and expressed gratitude for the opportunity. This was different from last year as the segregation had been marked by the hosts. Hypeman Jimmy and OAP, Folustorms hosted the show for the biggest artistes last year leaving another host to handle the show for the upcoming artistes. So where they had been set apart by hosts last year, the mark to set them apart this year is the stage.

Moving on to the main stage, the show didn't kick off as expected and fans who had been patient started grumbling when told of the technical glitch they were experiencing which apparently was due to the rain the day before which had disturbed some of the equipment (Whats with rain and GidiFest), but that didn't last for long as the show picked up and every con was forgotten. The performance was a delivery of back to backs from some of Nigeria's best and every bit of it was delivered on a high note as they gave their throwbacks and their recent hits, making the experience more magical as fans sing along.

The DJ started with Shakushaku vibes and then came Maka who was later joined on stage by Muna Abi giving us a great show of women working together.. .great show they gave. This was followed by Mayorkun who went from throwbacks to his recent hit, Bobo. Then came Tay Iwar who jazzed things up for himself as the crowd wasn't up for some jazz while they look forward to the artiste that'll continue the Shakushaku Mayokun and his crew stopped.

Ycee stepped up to it as he gave fans great vibes with his songs, from Jagaban to Juice right to his recent Say Bye Bye. Brymo gave the crowd great music and according to him, it was a great pleasure to watch this much crowd sing along to his song. While people expected to hear him sing Heya, he left after working the crowd to Ara'm be, leaving really happy but slightly disappointed fans who were looking forward to showing him how well they've learnt the song in such little time by singing along with him.

2Baba came to give us a great show as he connects with fans with his songs which we all know are hits and classics. How he went seamlessly with the beat, flowing through all song with little or no break, that is really commendable and we gotta give it to his band and back up singers who were in tune with his every step. Efya gave more covers of other songs like Wizkid's Daddy Yo, Skintight by Mr Eazi and the crowd enjoyed another vibe of the songs they love.

Adekunle Gold as always gave his golden performance that got fans dancing, happy and prophesying into their lives with songs like Call On Me, Money, Ire, and him dancing with fans on stage is certainly not forgotten... gave those fans great highlight to end the first quarter of their 2018.

Tiwa Savage brought her first lady aura on stage with her girls giving energetic Shakushaku moves behind her. She carried the crowd with her hits and ended with MaLo which was a smooth transition into her bestie, Wizkid's performance.Wizkid wrapped up the show with oldies, evergreens and new hit like Soco and Manya and bringing MuTay on stage was also a great one.

So do you guys think this year's GidiFest made up for last year's show where rain had its own festival on us? I think it did with the great genre line up that came through and almost everybody left the place really happy including "the official DJ" for the show, that is if there was any, as it seems he was too happy that he packed up after Wizkid, forgetting he is meant to keep playing for a while after the show, because at the end of the show, nothing was playing and it looked as if Wizkid went home with the sound leaving the place silent but for the voices of some fans talking about how to get home at few minutes before 6 am on the 31st of March.

Despite the ups and downs every show including this one has, the show was successful and it gave fans value for their money.

Cheers to a better #GidiFest2019