5 Reasons You Should Listen To Brymo's "Heya!" Before Time Passes You By 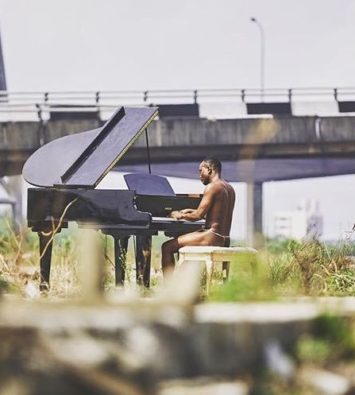 5 Reasons You Should Listen To Brymo's "Heya!" Before Time Passes You By

In the midst of all the Shaku Shaku we've been feeding on in the Nigerian music scene, good music is forever a breath of fresh air and Brymo has never failed us in delivery.

In this post, I'll be talking about 5 reasons I think you should listen to Brymo's new song despite the nudity that seems to be blinding everyone from seeing the message.

1. Breath of fresh air in the time of Shakushaku: In these time where we are now too beat conscious and all we do is go from pon-pon to Shaku Shaku, Bryno has come to give us something to really think about. Something light but deep, something fresh but strong. The melody and the sound of the piano, if you zero all your being to it, places you in an environment that helps you reflect. Without lyrics, the sound is a hit. So first things first, the sound is definitely a reason to plug yourself into this song.... detox your systems to create space for some Brymo melody in your heart. This is one emotionally beautiful song that will give you goosebumps before even listening to it.

2. The simplicity of the song: Simplicity will always be classy and this song, with how it is simply delivered, is already a classic and you know it too if you've listened to it, which you should immediately if you haven't. The song is really simple, flows right and nothing distracts you hence it is easy to match the words with the pictures. The delivery of song and video is seamless and fluid, everything was vibing well together. Simple song and simple video. The thing is, people like me might want to ask, what is this scene for? Why use this picture during this lyrics? But with this song, I had no reason to do that hence I just enjoyed the song and how simple the video is. That again is a hit!

3. Lack of consistent rhymes in the song: You know how some of our artistes these days give us rhymes by any chance they get? even if it means repeating words or chanting meaningless lyrics just to fill up that gaps and give us a 4 minutes song of almost nothingness? well, Brymo's Heya! lacked that kind of regular rhymes with some predicted lyrics, but that's the beauty of it, helps us to sing along. It lacking regular rhymes like we're used to hearing from artistes who want to show us they can drop bars shows how raw it is being delivered. It shows how much the artiste is more concerned with content, his message, and leaving beauty to his video. But of course, the song itself is beautiful. Its lack of consistent rhymes brings to you  The simple words used, dredge up memories and bring you face to face with something ordinary you didn't know you've been neglecting.

Dey look for woman to hold her tight

But na him ignorance

Dey let him love down (Heya!)

and some dey Talk

and love just dey pass us by

The simplicity of these lines bring up memories and when he talked about his childhood, that felt like pure storytelling with simple words like come and go, fall and rise and that makes it easy for you too follow the song and also enjoy his effortless delivery. The rhymes are not forced, they appeared where they should and sounded too normal you'd barely notice and that for me is sheer brilliance and unadulterated art. It feels pure, straight from the heart and not willing to please any lazy listener who isn't ready to enjoy good music.

4. The message: This song is one that activates your reflection button and sends you to a place in your life where you realize your ignorance has been costing you and you've been allowing things happen that we have the power to change. It is a song that tells us that life is not as hard as we make it if only we find knowledge and apply it with wisdom. The message is seen from song to video as he found a way to ensure the seamless flow of both. This song is the reminder that there is hope for all man because when we fall we rise but let's also maximize our time and not make any unnecessary mistake because there are some mistakes we might not be able to rise from. The message, many and tight and the most important reason you should listen to this song with great themes of time and love.

5. The video: Almost everyone that listened to this song immediately it was released was attracted by its video which a lot of people saw as obscene asking questions like "why would Brymo want to go mad on us after all the accolades we've given him?" even though it's not enough. I saw all the comment, saw the short video on, and I wanted to ask "why go naked?" but then as a fellow creative I know he wouldn't just decide to go naked in his video if that won't further pass his message, hence I went straight to  watch the full video. Brymo is what a lot of people aren't and from this video he continues to show that he is ready to do what it takes, not to please us but to ensure that he gives the right visual interpretation to his story and of course, also make sure his story be told even though it means him wearing the cavemen thong.

Now, when you watch music videos of some of our artistes, you'll realize that the essence of their video is just to either show their faces, make money on YouTube for their song or just shoot a video simply because the song should have a video hence the song and the video look disjointed when it comes to flow and the only similarity they might have is high sound, loud colourful visuals and girls shaking their  asses or dancing shakushaku. Brymo's video is a video consisting of just him and Lagos road but he showed us that the video is a huge part of the song as he was able to say in pictures the things he didn't say in his lyrics hence maximizing both media. The video is very simple and it strongly interpreted his message(s). The video is very artistic, from how he started; not knowing and coming out naked except for his thongs that were properly covered in front, then picking up his slippers from the trash and walking further to get to the clean piano covered with white clothing. That movement is something, and guess what? It can also be interpreted as "if you don't move things won't get done" his movement was shown and the song itself started over 1 minute 45 seconds into the video. That calm and steady way he told the story, taking us on the journey and teaching us some life lessons while he's at it. What's not to want to watch this video?

So these are the top five reasons you should listen to Brymo's Heya; it is too edutaining to ignore! You might have your own reasons, so please share!