If you've ever seen Burna Boy live in concert, you'll know he ranks as an energetic entertainer who knows how to get the crowd's attention, tease them and then appease them with a good time that leaves them eager for more. 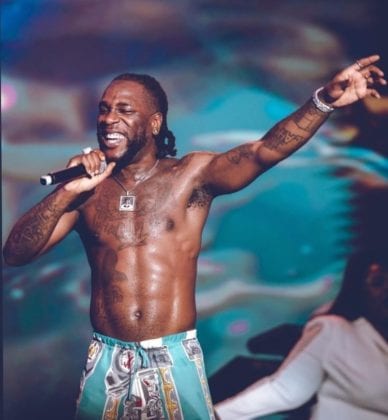 And if you've not, that's all fine and well as his virtual performance on Melody Livestream yesterday, 18th of November was a chance to witness Burna Boy live in concert without changing location.

But if you also missed that, here’s a review of the Burna Boy virtual concert:

The show happened at The O2 Arena Brixton, a venue Burna Boy conquered the year before on his African Giant tour.

However, this time, the crowd was at home, meaning the thousands of lights from phone screens and voices that would have been following Burna’s movements and renditions were nowhere to be found. As we know, the crowd and the energy they give are key elements that fuel the performance of an artiste.

Yet despite their absence, Burna Boy made the best of the situation, working with a talented live band to bring the sounds to life. Music has been established to be a universal language that can communicate a feel without even words. With his live band’s colourful execution of the instrumentals of his songs, Burna Boy was able to pull the diverse live streaming crowd in.

Then there was his vocals, which were fluidly supported by his back up singer, Christy. His performance which wasn’t restricted to any particular body of work saw him give soulful and elocuted renditions of his songs from ‘23’, ‘Way Too Big,’ ‘Anybody’, ‘Killin’ Dem’, ‘Comma’ to those he was featured on like Wizkid’s ‘Ginger’ and the remix of Master KG’s ‘Jerusalema.’

The sounds were also well mixed and especially so on records that featured another artiste. For instance, when Zlatan’s part on ‘Killing Dem’ came on, it felt so alive, you’d almost be convinced Zlatan was singing from a corner on stage.

It was likewise for Wizkid’s ‘Ginger’ where his vocal texture was retained so well that Burna Boy was content playing with his vocals and mostly lent Wizkid backup.

In the spirit of year two thousand and gbese, Burna Boy also didn’t fail to show off his dancing skills especially during the ‘Anybody’ set where he went off during the instrumentalisation.

Additionally, he put on the mantle of a show host as he addressed the home-based crowd a few times, humorously telling them to enjoy the show via the cameras.

On the note of camera transmission, it will be remiss not to mention that the camera placements on stage also served to make it a remarkable experience as you had to turn and tilt your phone screens to follow Burna’s every movement. While it tended to be a bit stressful as Burna Boy was quite the stage voyager, it also worked out as it kept the remote audience alert and hooked to their screens.

Overall, the production was good, down to the stage that had projections of Burna Boy’s videos as an alternative to choreographers and the three marionette gorillas dancing during the ‘Killin’ Dem’ set. With this virtual concert, Burna Boy has concretised the fact that he can deliver on any front and has no intention of falling short of his self-given ‘African Giant’ title.

Watch clips of his performance here: