In preparation for their performance this week, Wizkid teamed up with Burna Boy in a rehearsal studio in London as they both serenade our eardrums with live rendition of their latest collaboration 'Ginger'. 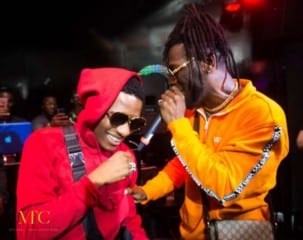 The duo collaboration 'Ginger' was featured on Wizkid's 'Made In Lagos' album that was released in October. However, since the release of that album, 'Ginger' has grown to be one of the favourites amongst the songs on the M.I.L album.

In partnership with YouTube originals, Wizkid earlier announced that a deluxe live version of his M.I.L album would be streamed on YouTube for 1hr and he also told the fans to be highly expectant as he intends to spring up some interesting surprises.