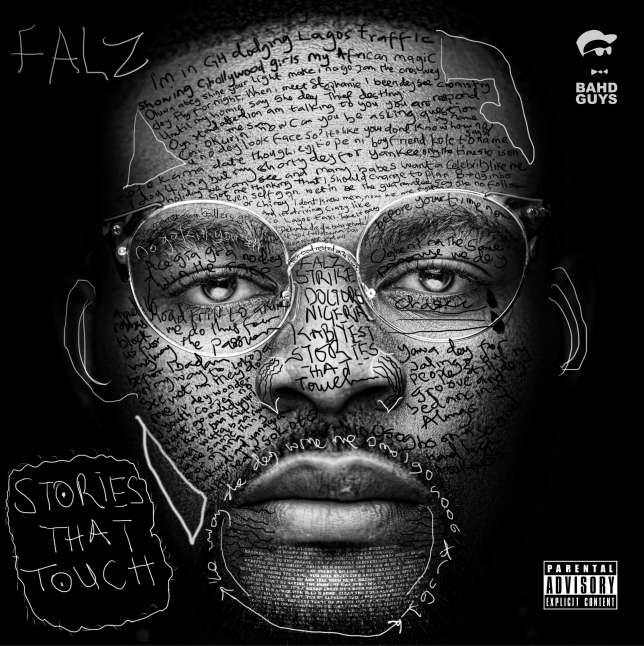 Coming off a very successful year, Folarinde ‘Falz’ Falana is back with his sophomore record, Stories That Touch. He’s been ubiquitous, from fronting Ad campaigns for several brands to becoming an A-list star, still, it’s back to the music for him. Being the scion of one of Nigeria’s foremost legal luminaries must come with it own pressures, indeed, Falz is a qualified lawyer but his route to the music scene has been less than conventional, blurring the line between his act as a comedian and a rapper. One is never quite sure which is which. Oddly it works, as he switches effortlessly between Yoru-English, Yoruba, and Pidgin.

The record opens up with Kabiyesi feat Oyinkansola (Kabiyesi means ‘his highness’), which samples Fuji legends, KWAM 1, and Sikiru Ayinde Barrister. His oriki (lineage poetry) forms part of the chorus, his praises are sung in a manner that’s akin to the rapper smiling at himself in a mirror. The reflection is dope though; this is the most appropriate way to open the record.

Stories is a concept album in the sense that every song is a stand-alone story; playfully admonishing as on Workaholic or encouraging as on My People. He gets seemingly personal whilst relaying the angst of a young man enduring a long-distance relationship on Time Difference. Karishika feat. Phyno & Chigurl, is as much about the production as it is the rappers’ work. Falz has undeniable chemistry with the album’s chief producer, Sess. The haunting underlay of the beat marries perfectly with the mood the rappers’ verses set. It’s a head-nodder, a rap along-er, and Falz’s second verse on the track is one of his best showings on this record. Soldier feat. Simi marks the album’s zenith, a tale of unrequited attention that would have been made that much better had Falz delivered his verses in standard Yoruba/English. Simi does her thing on the chorus, coming off as assured and vulnerable at the same time and she is mostly the reason the song makes such a lasting impression.

This is a very good record, its standout tracks are made by each of the album’s featured producers, Tintin with Kabiyesi, Sess with Karishika, Soldier by Oscar, and Chardonnay Music feat Poe & Chyn by Spax; this one is for the Lekkoyi wine-sipping crowd, his natural constituency. Horns laid over honey warm percussion, it’s a delight; this is SS3 senior rap, make my juniors bow/ still do this for the cake, we do this for chow/They say when they don blow they turn stupid or proud/I guess I’m stupid and proud.

He has shown that he understands how to make a record, for the second time, following the unfairly slept on Wazup Guy. The Bez assisted wedding jam, Love You Pass is an obvious play for the huge wedding market, laid over what sounds like a large live band production. Even if the song does not quite convince one that Falz himself is ready for what he’s rapping about it all comes together beautifully.

The level of confidence it takes to resist resting on the undoubted synergy he and Sess enjoy is to be admired. The disparate producers managed to make a record that sounds like an album. Each story is given its proper chance to be enjoyed, minus Kawosoke; this track is Falz overindulging himself, an unsuccessful attempt at making a pop fuji record, and to a lesser degree, Celebrity Girlfriend. Falz has made what has to be the Hip-Hop Album of the Year to be specific and a contender for Album of the Year.

Perhaps he had something to prove or he was just having fun making music but Falz has injected some much-needed excitement into the scene, a joker. ‘Stories That Touch’ is the Nigerian equivalent of the sarcastic refrain, cool story but there’s nothing funny about this record, he’s clearly for real. His work ethic and his desire to make a record worth remembering is best illustrated by Karishika (Part 2) feat. M.I & SDC. He didn’t call it a remix and leave one of his original verses on, he laid a fresh sixteen bars on it. It’s something small but these are the signs that let his audience know that he takes this record-making process seriously. Another point worth noting is, the features all enhance this record; the aforementioned Simi, Reminisce, the particularly impressive Poe & Chyn, etc, they all showed up on their respective tracks.

Stories is an exoteric album, not surprising since his shtick is very much the hapless everyman who is unaware or uninhibited by his own flaws. Largely shorn of invectives, sans the risque Clap, this album certifies him as a rapper in every sense of the word; his flow, delivery, and storytelling skills compare very well with the better amongst his peers. The minor gripe is, Falz is a character. It’s unclear how much of the man behind the character sneaked on to this record but it isn’t much of a problem if the character can make music that will stay on deck as this record will.

For those who get the joke and understand that Falz is a character and for those who can’t tell the difference, Stories That Touch offers something to enjoy for all.

*The opinions expressed in this article/review are those of the Author, and do not necessarily represent the views of notjustOk.com.*