Album Review: Experience All Of Adekunle Gold In #About30 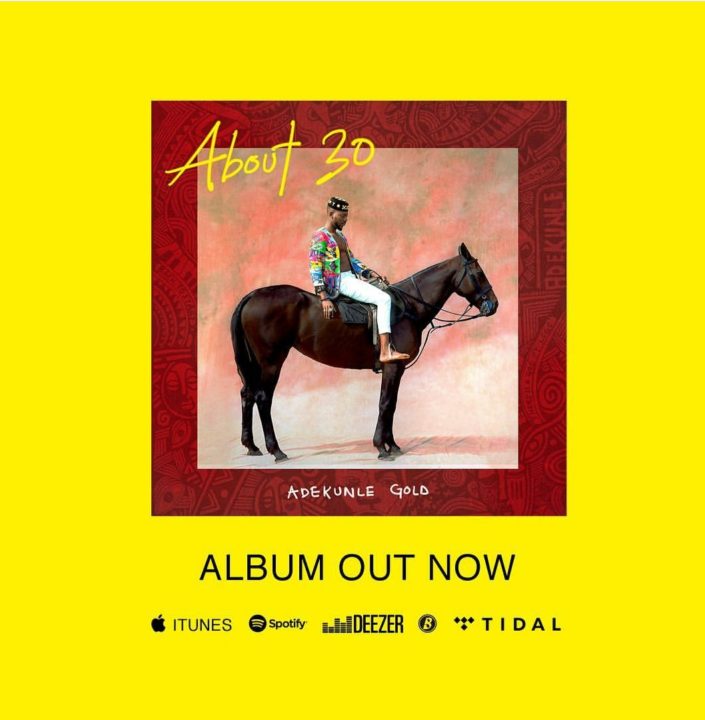 “If you want to know an artist, study his works..."

How true is this saying? Well, if you want to go by afropop star, Adekunle Gold’s About 30, then I’ll say it is accurate. This album was released on the 25th of May with tracks that'll touch almost every part of you.

About 30 is Adekunle Gold's journey to becoming and living as a thirty-year-old man. It tells us the story of his love, happiness, heartbreaks, philosophy of God, family, finance, friends, mentorship, and motherhood. It tells a story of his life till his point of being thirty, giving us tracks from years ago that he has kept for the right album as this one.

The album opens with a beautiful song ‘Down With You’ co-written by DYO. It’s a love song where the lovers assure each other that no matter what they are there for one another and rather than the distractions around, they should focus on themselves. A great blend of voices, a flow of Yoruba language and a great message.  Adekunle revealed the song was written from 7pm-2am and immediately he made the song he knew the song has to be the first beautiful piece you should know about him.

Adekunle became a Teacher in the next song, Mr. Foolish, which was inspired by the foolishness of man caused by ignorance, social media and the various vices he mentions. A "proverb-densed” satirical piece calling out people who do foolish things and don’t bother because according to the artiste, the society celebrates stupidity. The singer revealed and the title is a childhood name his father used regularly on him if he does something foolish. The song is hundred percent live production which features Femi Kuti and his band and produced by Seyi Keys with Adekunle painting great pictures with his words like

He’s back with his lover boy vibe in the next track Surrenda, ready to surrender all to his woman. A mid-tempo song professing his love to his woman and telling her he is ready to love and surrender all to her. This song and Down With You will definitely thrive in not just the Nigerian market but globally with wedding celebrations happening every Saturday, this is that perfect song to help you let go and start a love journey with your partner, a beautiful song that welcomes the next hurtful but funny track, Damn Delilah.

Damn Delilah is a message to his former lover who broke his heart but he has never had the opportunity to totally let the hurt out of the way. The first line says it all about the song, “To hell with you, Delilah”, “you made me weak and left” The pain the artiste feels is because of how Delilah left him and now trying to reach out to him after he has moved on only adds to his disgust of her. This song will certainly receive thumbs up from men who have been in similar situations and haven't found the perfect song to make it easy to explain their plight.

Yoyo is the jubilation track after warning Delilah to stay away. It is a highlife thanksgiving track with Flavour Nabinia. A song that encourages all to enjoy all that life has and allow only good vibes into their space. “Yoyoyo, this life is sweet, enjoy every day like tomorrow no dey o. .. yoyoyo my life is sweet, i’m living the moment, bad belle e quiet”. This is a feel-good song that although understands the worries of life but intentionally focuses on every day like it’s the last “Ma jaiye ori mi, mi omo eyin ola o” and Flavour adding his flavor that gives us an amazing melody. This one is for the haters, ... get this album and spray them off with this track!

Great time to introduce that single almost everyone has used as a prayer point since its release. Money is a song that pleads with God to reward the labour of his hands as he has responsibilities and does not want to get money via illegal means. The song is the wish of everyone who, like the singer, wishes that God will one day “Plant money for my backyard” and he’ll have “Plenty money for my house”  that day where they’ll be “No recession for where you dey” but till then, “Oluwa visit me I dey wait o”. With a background that does not include plenty of wealth; the singer sings about his strong desire to be rich enough to take care of his responsibilities and promises to be generous to others. This is a prominent theme in Adekunle’s songs and it speaks to almost everyone. Although it was released and as a single track, it is a great addition to the album.

Adekunle becomes a teacher again in the next track, Pablo Alakorin as he speaks to the generation of “handout-lovers”, a generation that has refused to work but wants to be rewarded and all he is saying is there is no shortcut. If you want something you have to work for it and you cannot use wuru wuru(fraud) to get to the top; there’s a due process and until you follow that process which involves hard work, that desired result you want will not come your way. This chorus was laced with Simi’s beautiful soft vocals and He uses words like Wuru wuru, Mago-mago, wayo all which means fraudulent act. “No shortcut”,  “No play with your future”,  “You no do anything you want to hammer” are some of the lyrics the singer uses to drive his point home.

This takes us smoothly to Remember where he tells supposed destiny helpers to allow the people they’ve helped at a point in time to grow without trying to dent their growth. The song is more to the people who is holding their good will against the people they have helped and not happy that these people are finding their path. If you’re on this table, quickly come down before you fall.

The issue famous people face is hardly discussed because they want to maintain the perception of a good happy life people have of them but with this Fame, Adekunle Gold touches one of the many issues. This track talks about how fame can sometimes make you feel like you don’t belong where you used to feel at home, making you think twice about what you want to naturally do and conscious of what people will say. “I wanted the fame and I no know say the thing go hard o. Some days I want to run away I no go lie o” because sometimes he feels alone even in the most familiar and love filled environment.

This is a beautiful song that lacks the infusion of any of Adekunle’s Yoruba language like we know him to do and the slow tempo of the song flows better.

All you'll think about is Understanding and content when you listen to Somebody where Adekunle highlights the difficulty men face in trying to be faithful in a relationship and the temptation he has to overcome. The singer reveals how his journey to fame has exposed him to so many people girls who were willing and available that he almost forgot he has a girl, an act which was due to his “Ojukokoro” but he realized they’re not his girl. The track shows the singer’s understanding that while there will be prettier and sexier women than his woman, they can never be like his woman. Now, these are words from a man whose understanding is giving him nothing but contentment in and with the woman he has.

Still on women, Adekunle Gold talks about the irreplaceable woman in his life, Iya Kunle. A track like no other and the most emotional amongst all, Adekunle sings a song for his mother who gave up her gold to raise a gold in Mama. The singer sings of his mother’s love for him and his love for her and every day to him his mother’s day. It is that song we should all sing to our mothers for them to know they have done a great job raising us because while they know we love them, telling them makes a whole lot of difference. Can this song be placed alongside the classic “sweet mother”? definitely!

This flows into the guitar sound of There is A God; taking Adekunle back to where he started, the church. A beautiful piece that exposes unbelievers to the greatness of God. In a world where everyone is trying to be politically correct and people are sceptical about countering the beliefs of another, Adekunle fearlessly takes his stand to tell the world that there is indeed a God else how do you explain some things that cannot be logically or scientifically proven such as the pregnant woman without a womb or the sick being healed without medical help or even the sun rising and the rain falling? The beauty of this song was completed by the LCGC choir who gave us all the church we needed and love with their well-arranged vocals.

Finally, Adekunle takes us Back to Basics taking us down the sweet memory lane of our childhood and how happy little, free and playful things make us. That lane where we learned songs off the street like boju-boju and baba dudu giving you that nostalgic feeling and also showing you how much you've grown and the things you've learned in your journey. A similar song to Bez's stupid song and this time

The bonus track of Ire featuring Jacob Banks was a great piece giving us another rhythmic flow to Adekunle’s most streamed song at the moment.  Ire Remix with Jacob gave us not just another rhythm, but also another lyric on the second verse by Jacob that speaks of our ignorance as humans and how fate still gets the chance to take its laugh last as it knows how we’ll eventually end.

The album is majorly produced by Pheelz and Seyi Keys and of course, a great accolade should be given to his band, the 79th Element for their contribution to this album... every bit of their element was felt!

This album is a 10/10 for me as it achieves everything it sets out to do. These issues weren’t just mentioned, they were creatively produced to give us great thoughtful music and the best we can do is encourage greatness with our support so we can get more of it.

Head straight to the available mediums to grab your copy, Now!