Slimcase real name is Oladapo Oko – Eko and he is a fast rising Nigerian singer, song writer and entertainer. He is also called Otunba Lamba by fans.

Slimcase was born in Ikorodu, a Lagos state surburb where he also schooled, though he had to drop out to pursue his love for entertainment. He comes from a humble background and didn’t always have things rosy and as a result got raised on the streets. 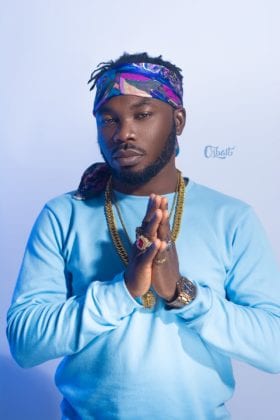 Slimcase worked as a factory hand for about 10 years where he earned N15, 000 ($420) monthly before venturing fully into entertainment. According to him in an interview he granted Punch, he worked with Dangote and a lot of companies that were into producing dry gin.

He never started out as a musician but rather as a comedian and performed for friends, family members and at social gathering before venturing into music.

In music he started out as a rapper and doing radio friendly songs, drawing his influences from renowned artistes likes Snoop Dogg, 50 Cent, Eminem, Dr Dre and others.

Slimcase came in contact with Beat by Sars in 2011 and he helped him record his first ever vocals for a song at a studio in Akoka, near University of Lagos (UNILAG).

He had been in the industry for about 7 years without much progress until he decided to embrace the ghetto sound. This move turned out to be a masterstroke as Slimcase overnight became the rave of the moment in the Nigerian Music industry. Even he himself confessed that he never expected to be this big within such a short period of time.

Slimcase’s rise to fame was as a result of capitalizing on the new “Shaku Shaku” dance with his song “Oshozondi”. He brought his unique style of Wobe sound to his craft and all over the country fans were appreciative. The “Shaku Shaku” trend spread quickly with more hit songs from Mr Real “Legbebge” and Idowest “Omo Shepeteri”.

Today, he is a force to reckon with in the music industry with several hits to his credit and collaborations with the likes of D’Banj on “Issa Banger”, Yemi Alade on “Shakpati”, Wizkid on “Gucci Snake”, DJ Enimoney, Tiwa Savage And Reminisce on “Diet”.