It was the most anticipated scene for fans of Paris Saint-Germain, as Lionel Messi made his debut for the Ligue 1 club. The Argentine had to wait for three games before he got to play for PSG in a competitive game. The Argentine came into the game in the 66th minute for Brazil’s Neymar. 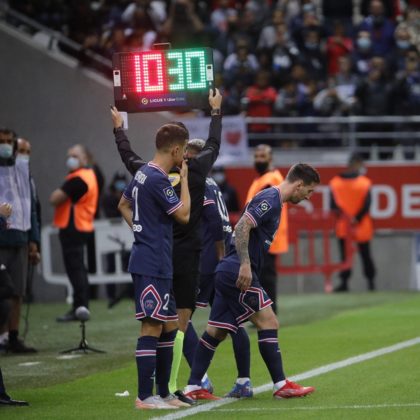 Messi left Barcelona in July 2021, when the Catalonia club confirmed that the Argentine’s contract will not be renewed because of the financial fair play rule in Spain.

The game was not all about Messi’s first debut. It was a game that saw Mbappe score both goals of the game to give the Paris club maximum points. The French player showed class and professionalism by giving his all to the team despite his desire to leave for Real Madrid.

PSG has offered Mbappe two different offers, but the player is adamant that he wants to leave the club. Real Madrid has made two offers for the 22-year-old. The Ligue 1 club rejected the first offer of 160 million euros but are yet to respond to the second offer of 170 million euros.

Mbappe is in the final year of his contract and if he insists on not signing a new contract, then he will leave the club for free by the end of this season.