Wizkid Talks “Made In Lagos” With Ebro on Apple Music

Nigerian megastar and label boss, Wizkid talked about his newly released album “Made In Lagos” on Apple music “The Ebro Show”. 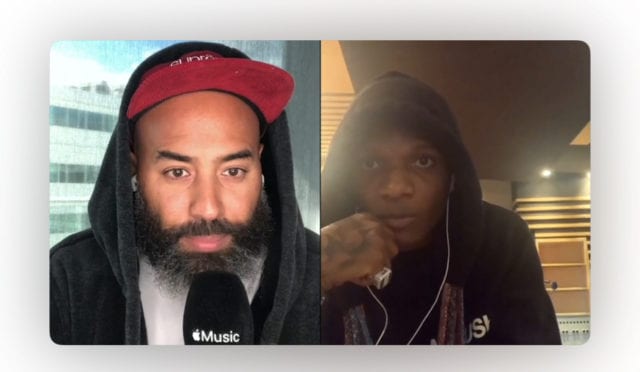 Wizkid on The Ebro Show

Starboy as he is also referred to, expressed his motives and inspirations behind the Made In Lagos album and the need to create quality music. He expressed:

Lagos inspires me everyday bro, everything about Lagos is me mehn. With this album I just wanted make like real music, I want people to know like the quality music that comes out of Lagos. We make amazing music, that’s what I really wanted to show with this project.

Wizkid further talked about the recording of “BLESSED” and his link-up with Jamaican megastar, Damian Marley. He said:

We actually made that in this room you know, which is crazy. We had a show together, I think I was headlining a day before him, and he headlined the day after. That guy has the most amazing energy mehn, he changed my perception of life in general, like I was happy to be in a room with artist like that. We spoke about family, food, Jamaica, Lagos then we made the record mehn, it had to be fire. Shout out big man Junior Gunn for that one.

Wizkid also talked about what it was like making music with H.E.R, he said:

I was here for a session and Stormy came down, he somewhere in the studio upstairs and was like yo I’m in the studio with H.E.R and she wants to say what’s up? She came down and she asked what record was I working on and I played it to her and she was like this is fire bro. Immediately I played her that record, I just knew yo! You are the only one that can be on this record that can make it special for me. She really did. She took her time with it and made it smooth mehn.