Nigerian singer, Wizkid was in the capital city, Abuja yesterday for a performance. He was given an award titled the "Best Male in Africa" by a certain group and his reaction was hilarious. 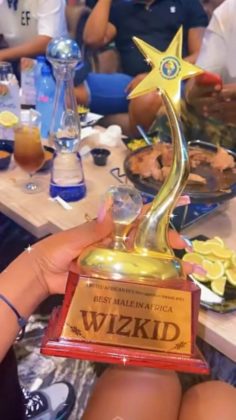 The video of the singer giving a hilarious speech in Abuja was posted on Sunday, the 13th of June 2021. Laughing, Wizkid held up the award and said, "I want to dedicate this award to my mother, my father, my pastor, my imam..."

Wizkid has won a multitude of awards both locally and internationally. It is sure good to see that an artist of his stature can still receive awards and validations from his own people. This award given by the people of Abuja is a testament to that.