Nigerian singer, Davido has teamed up with South African rapper, Focalistic to shoot the music video for their coming single, this time in London.

Focalistic appeared on stage for Davido's recent concert in London and they've taken this time to shoot yet another music video. The video of them on set was shared via Instagram on Wednesday, the 1st of September 2021. 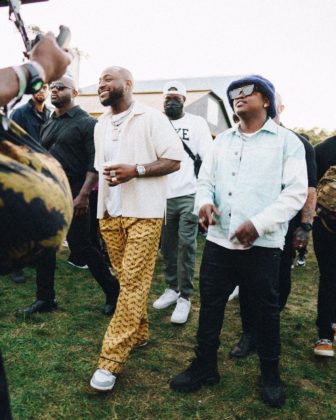 Back in June, Davido teased a new collab with Focalistic after his feature on the SA rapper's Ke Star song made waves around the continent. Davido shared a cryptic photo hinting at this on his Instagram story on Tuesday, the 1st of June, 2021. He posted a photo of Focalistic recording in the studio and wrote a simple caption, "FOCALISTIC PART 2???".

READ ALSO: Davido Hits the Stage in The UK for First Time in Two Years | WATCH

Just last weekend, Davido called Focalistic up on stage at the Yam Carnival in London during his performance and they're now shooting another music video together. There have been talks of the duo dropping a joint project and we hop the rumors are true because their chemistry is quite natural.