New collaboration between Ghanian legendary rapper, Sarkodie and Nigerian  Zanku star, Zlatan ‘Ibile’ seems to be brewing as both artsites were spotted in the studio. 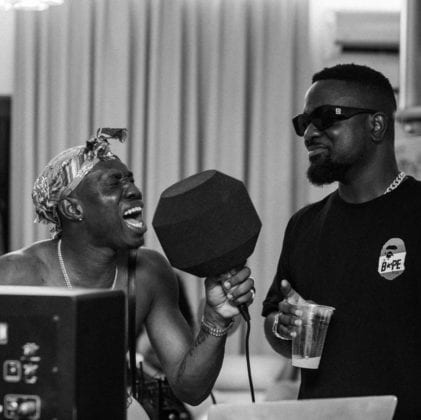 King Sarks, as he's popularly referred as posted photos of himself and Zlatan vibing hard in the studio on social media on the 7th of October 2020 with other personalities including British-Ghanaian recording artiste, Nana Richard Abiona, better known by his stage name Fuse ODG, and popular Ghanaian actor, Michael Blackson who seems to be enjoying the vibe in the room.

The SarkCess Writing camp had my super star @zlatan_ibile , @michaelblackson and @fuseodg in the building ...That African energy on a 💯🔥🔥🔥🔥🇬🇭

Zlatan is the second Nigerian artsite to be spotted in Ghana, to not just chill but to also make music. The first being Davido whom we spotted last week creating what has been called a hit on arrival with Ghanaian dancehall superstar, Stonebwoy.