Nigerian Afrobeats singer Omah Lay kicked off his purple tour with a sold-out show at The Fillmore, Silver Spring, in the United States. 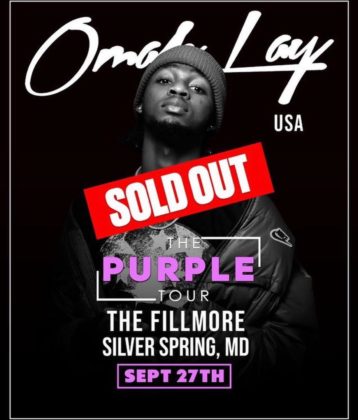 Nigerian Afrobeats singer Omah Lay kicked off his USA ‘purple tour’ with a sold-out show at The Fillmore, Silver Spring, in the United States.

The Purple Tour was announced by the singer as a way to give his fans in the US a thrilling experience. The tour is scheduled to run from September 27 to October 13th, 2021. The headies winner is expected to tour around different cities, including New York, Maryland, Georgia, Rhode Island, Florida, Texas, California, Arizona, and Minnesota.

In a video that surfaced on social media, Omah Lay kickstarted his tour with a thrilling performance for his fans at the Fillmore, which was reportedly sold-out.

Recall that Afrobeats poster-boy Wizkid also sold-out the Fillmore for two days courtesy of his ‘Made in Lagos‘ Tour, bringing out heavyweight rapper Wale, who is also a countryman, to thrill the fans on one of the nights.