The highly anticipated Hennessy Artistry cypher by M.I, Vector, Jesse Jagz, and Teetos Ceemos was released on Friday, the 11th of December 2020 and hip-hop enthusiasts are in awe of the highly missed veteran Nigerian rapper, Jesse Jagz. 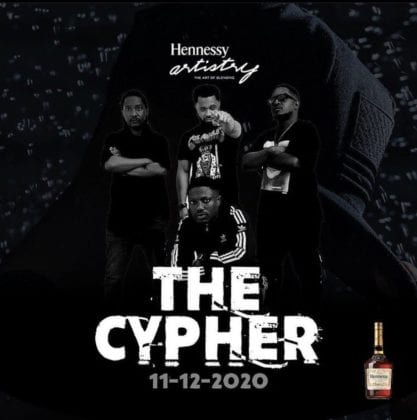 It felt great to see the very talented, singer, producer, and rapper, Jesse Jagz who has been underground too long, spit mind-blowing bars on the 2020 Hennessy Artistry Cypher.

As seen on social media, some believe that the Jagz Nation Boss, Jesse Jagz might have killed the cypher, outshining his megastar elder brother, M.I, superstar lyricist, Vector and Teetos Ceemos.

However, most people believe that all rappers delivered heavily on the cypher with only Teetos Ceemos being the weakest link. Aside from Jesse Jagz, Vector and M.I proved why they are arguably the best rappers to have come out of Nigeria and Africa.

The 2020 Hennessy Cypher was super litt and chopsticks produced the beat.

Upon release of the 2020 Hennessy Artistry Cypher, it trended on Twitter Nigeria alongside all the artist featured on it, and for their impeccable but outstanding delivery, rhymes, wordplay, and bars, here are what the fans are saying about the cypher:

Jesse jagz is not your fav rapper's mate. Man ate that #HennessyArtistry2020 like its nothing.🙌🏽 pic.twitter.com/xyomo9hR8c

Jesse Jagz, Vector, MI and the other guy pic.twitter.com/YreycUzetv

Listening to Jesse Jagz on that Hennessey cypher made me go back to this. Jesse always been dope fr fr! pic.twitter.com/u7RXrYnywq

Seeing Jesse Jagz on this cypher gives me so much peace ✌ pic.twitter.com/GpoQAdYBrR

The quality of the sound in the Nigerian music industry is gradually catching up to Jesse Jagz’ level.

But who brought the idea of having MI and Jesse Jagz on the same Cypher? People dey think sha🔥🔥🔥🔥

How Jesse jagz didn't blow that much is beyond me.