Continuing Don Jazzy’s interview with Ebuka Obi-Uchendu on the latest episode of the Blackbox interview series. In part 2, Don Jazzy talked about the cause of his split with D’banj, his beef with Olamide due to the headies handed to Reekado Banks, and his love life. 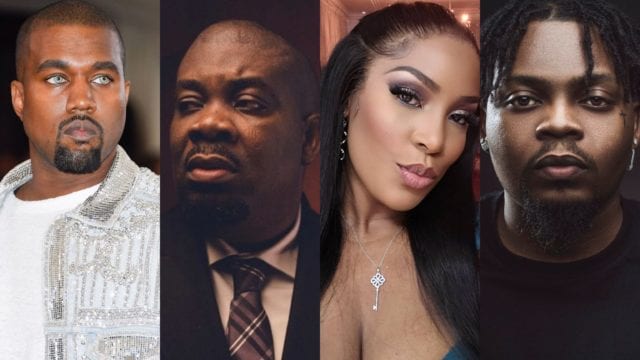 In part two of the interview session which was uploaded on the 4th of April 2021 on Bounce Radio’s Youtube Channel, Don Jazzy revealed the cause of his split with long-time music partner and friend, D’banj. He said the international deal signed with Kanye West’s G.O.O.D Music was the beginning of the end for him and D’banj. According to him, the move did not seem right for the afrobeat genre as at the time they signed the contract. Don Jazzy disclosed he wasn't ready to move to the United States of America and decided to work from Nigeria against the will of D’banj. From that moment it looked like things will never be the same again and it led to them having a face-to-face discussion in which they wished themselves well and went their separate ways. Don Jazzy went on to kickstart Mavin Records, while D’banj’s American adventure didn't turn out great. Despite his refusal to move to the United States, Don Jazzy remained faithful to his five-year deal with G.O.O.D Music. However, Don Jazzy and D’banj are back on talking terms but things aren't as they used to be before the split.

Don Jazzy went further to address his 2015 Headies awards outburst with YBNL boss, Olamide after Reekado Banks emerged the winner of the Next-rated category ahead of Lil Kesh. According to him, the outburst wouldn't have happened if he didn't receive his award immediately after Olamide called out the organizers of the award for not announcing Lil Kesh as the winner of the Next-rated category. He disclosed that the beef with Olamide has been squashed. It can be recalled the pair collaborated on the smash hit single “Skelemba”.

On grooming new and young acts, he said while he works with youngsters like Rema, Ayra Starr, and Crayon, he also learns from them. The Don let in viewers on a secret that there are artists in the Mavin academy who haven't been signed yet but are doing their thing without being publicly affiliated with the record label.

In regards to his love life, Don Jazzy didn't rule out the possibility of getting married but he doesn't see that as a priority. Judging from the experience of others, he feels like he hasn't felt the “butterfly in the belly” sensation when it comes to love and having a partner. On his take of childbearing, the option of adoption is a welcome idea and he sees his nieces and nephews as his kids. Also, Don Jazzy debunked claims that he was involved in a romantic affair with media personality, Linda Ikeji. He dismissed the claims as rumors.

Watch part 2 of Don Jazzy’s interview session with Ebuka on Blackbox below;