Burna Boy has been recognized with a plaque for being the first Afrobeat artist to sell out one of the most iconic arenas in the United Kingdom, The SSE Arena.

This recognition was given to the artiste after selling out and shutting down the SSE Arena which was formerly referred to as Wembley Arena on the 3rd of November 2019 when the African Giant filled the stadium with Outsiders who vibed all night with the artiste and his numerous hits. 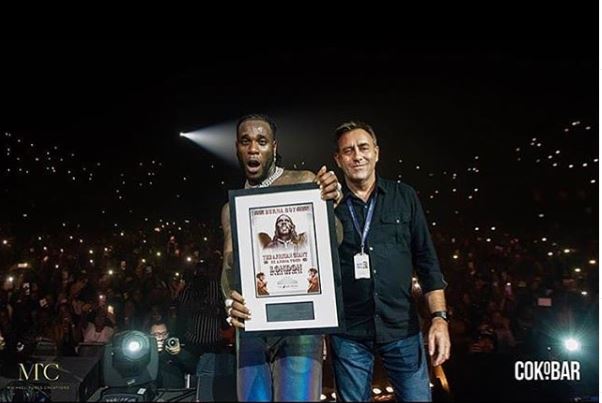 The Arena which was reopened in April 2006 is a 12,500 seat facility used for music, comedy, family entertainment and sport. It is also London's second-largest indoor arena after The O2 Arena and the ninth-largest in the United Kingdom.

This award seems like a perfect "Monday motivation" win as the afro-fusion artiste was also awarded as the MTV EMA Best African Act and according to DJ BigN, this is Burna Boy's hard work and positive affirmations towards himself coming to pass. He said;

Knowledge can come from anywhere. This time it has come from @burnaboygram 1) it’s ok to #WantMore ....all he did was ....want more 2) You are what you call yourself. #AfricanGiant , speak it into existence 3) Delay is not Denial ....NEVER .... congrats on your MTV EMA win and your sold out Wembley Show.