Headies Rookie of the year Winner for the year 2020, Bad Boy Timz, has revealed that he was not particularly surprised when he won the award as he expected it all along. 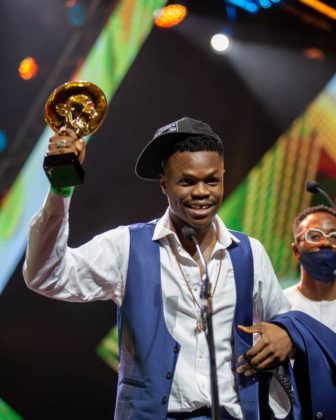 The singer was on the cover of TaylorLive Magazine's latest issue which was released on Monday the 24th of May 2021. During the interview, Bad Boy Timz was asked how he felt when he won the coveted Rookie of the Year award at the 2020 Headies. He replied by saying he felt amazing but was not really surprised because he was expecting the award to come to him. In his words;

When asked if he paid for the award, he replied;

Did you help me pay for it? I actually wish it was easy to pay for an award in Nigeria. I think that's the idea a lot of people have but that's a really false idea.

The singer also revealed that Olamide reached out to him to feature him on the hit song "Loading" off the rapper's "Carpe Diem" album. When asked how the song came about, he said;

I have always had a relationship with Olamide. I met Olamide in 2017/2018. I did a backup on his previous album titled "Lagos Nawa". The title of the song was "Radio Lagos". After that period I didn't really hear from him and then fast-forward to 2020 after I dropped "MJ" and then the pandemic was serious. He then reached out to me like "Yo wassup, I'm trying to wrap up my album and I don't think it's complete without you".

Bad Boy Timz beat Olakira, Alpha P, Jamopyper & Zinoleesky to the coveted Headies Rookie of the Year award at the ceremony which was held on Sunday, the 21st of February 2021. He had a great run in 2020 with his hit single "MJ" which had two remixes with Mayorkun & Teni. He also featured on Olamide's hit single "Loading" off the "Carpe Diem" album.