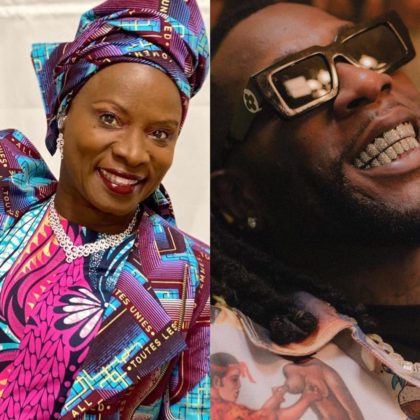 The singer was in an interview with Smooth FM via zoom call recently and a clip of that interview was posted via Twitter on Tuesday, the 6th of July 2021. The interview asked Aneglique Kidjo what she thought about Burna Boy's unapologetic attitude. The legendary singer replied that Burna had no need to apologize for anything. She stressed the need to be humble as a talented person, but disagreed about the need to always apologize. Angelique also recognized the fact that African-American will not be criticized in the same way if they had his kind of attitude. In her words;

That's the way to to do, because he knows what he is talking about. When you're talented, yes, you have to have humility but that doesn't mean you're going to walk on yourself and apologize. For what? I'm good at what I do. You don't like it? Sorry! If it was an African-American person having that attitude, nobody would say anything. That's my boy mehn! Let him do his stuff. If you don't like it, sorry for you... You leave my boy alone!

Angelique Kidjo and Burna Boy have quite a relationship. She sees the Nigerian singer as the next best thing and said so herself in so many words when she dedicated her Grammy Award win to him in 2020. Burna Boy was also nominated in the same category with her that year and managed to win it the following year with the 'Twice as Tall' album. He followed that up with his 3rd BET Awards win in as many years.