When we thought the Plantashun Boiz drama was over, Nigerian singer, Blackface has revealed that Nigerian superstar and former group member, 2Baba and his manager, Efe Omorogbe are suing him for 50 Million Naira. 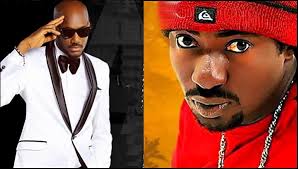 Tuface and BlackFace have been on the war since 2Baba left the Plantashun Boiz music group. After the split, Tuface Idibia released his debut solo album, Face2aface containing African Queen, a single from the album that didn’t just became a hit but has come to be the signature of the singer. The song brought the war of Tuface and Blackface to the fore as Blackface revealed he had written African Queen for Tuface.

This accusation was never officially addressed by Tuface and his team and another accusation of the same sort was lodged or better still, revealed to the public when Tuface released Let Somebody Love You in 2014. This time, Blackface expressed pain over not being credited for the song instead 2face has given the credit to Omorogbe who has been referred to as the co-writer of the song.

This time, the accusation was responded with a threat from Efe Omorogbe to sue Blackface if he does continue with his “wrong claims”. If the threat was just a mere threat, Efe Omorogbe said;

”I don’t really want to comment on this, our lawyers are addressing the issue and we really don’t want to sensationalise it.

Apparently, the lawyers were really addressing the issue judging from what Blackface has recently shown us. The threat has been carried out and no longer a threat as a paper has been served to Blackface by the Lagos State High Court and according to Blackface statement on informing the public of the suit, he said; 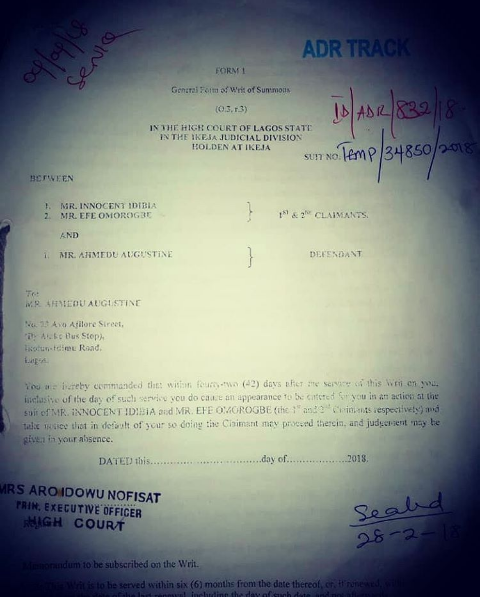 According to Tuface’s manager, he said;

It’s a defamation suit, our lawyers have repeatedly told him to stop making insubstantiable claims about people stealing your stuff, he has refused to comply, our lawyers are suing for defamation.”

Speaking on the alleged amount of 50M naira, Efe said,

”If you defame someone, there is a punitive damage attached to it, you don’t spend your energy, pay lawyers to go to court without a payment, it is what it is. He spent a lot of years peddling what we believe is falsehood and all attempts to get him to stop maligning our characters and defaming us, he didn’t listen, so let him prove his allegations in court.

We think his allegations are false and unfair, if he insists they are right and correct, then let him prove them in the court of law.”

Speaking further, Efe Omorogbe stated that suing Blackface is the last resort as they have tried every possible method to talk him out of defaming Tuface’s character with the stolen song gist but no avail. They have tried to reach out to him, from friends to elders but nothing has worked and to them, this is the last and only resort and it has to be done so he can stop.

‘We have dealt with Blackface and his issues for almost a decade, I have in my capacity repeatedly tried to do things with Blackface, and incorporate him into stuffs we are doing, we have reached out to him, time and again, we have tried to broker a reasonably respectable relationship, it has not worked.

Mutual friends, elders have tried and tried, people that he attended school with, they have all tried to get him to stop peddling all these falsehoods, the first approach was not to go to court, it was a cease and desist request, the lawsuit was the last course of action.

I never wanted to join issues with Blackface, I have made my opinions known in the past and I really don’t have any extra thing to say, let the courts prove his case.”

Do you think this was about time or it wasn’t necessary? Let’s hear your thought(s).